Japanese Foreign Minister Taro Kono said Thursday that South Korea's decision to terminate a military intelligence-sharing pact between the countries is "extremely regrettable" and Tokyo had lodged a formal protest against the move.

By pulling out of the pact, designed to counter North Korea's missile and nuclear threats, Seoul "completely misreads the security situation in Northeast Asia," Kono told reporters after returning from China.

Earlier in the day, Seoul said it will not extend the General Security of Military Information Agreement, or GSOMIA, because Tokyo's recent tightening of export controls on some materials crucial to the South Korean technology industry has created a "grave change" in conditions for their security cooperation.

Speaking to reporters in Tokyo after attending meetings in Beijing, Kono said he summoned South Korean Ambassador to Japan Nam Gwan Pyo to his ministry to lodge a protest. Nam said he would relay the message to his government. 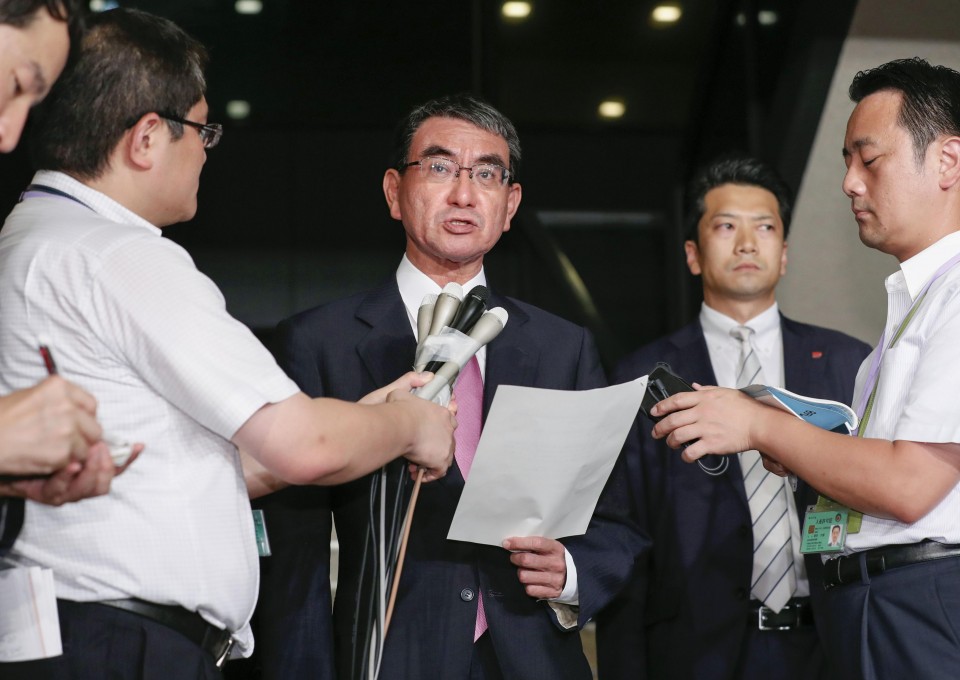 A Japanese government official, who spoke on condition of anonymity, criticized the decision, saying, "We have to say South Korea has brought the standoff between the two countries into the security sphere."

The official also pointed out it is necessary to examine what the administration of South Korean President Moon Jae In wants to do about relations between the two neighboring countries.

The pact, which had been automatically renewed annually since it was signed in November 2016, was due to be extended Saturday unless one of the countries decided to abandon it.

Japanese Prime Minister Shinzo Abe was tight-lipped Thursday evening when asked by reporters about the decision, which is almost certain to deteriorate the countries' political relations that have already been chilled over historical issues.

South Korea's plan to end the pact adds to growing concern that the deepening row between the two key U.S. allies in Asia will threaten cooperation over regional security issues such as threats from North Korea, which has carried out a flurry of short-range ballistic missile tests in recent weeks.

Kono was in Beijing to hold talks with his Chinese and South Korean counterparts. During a meeting with South Korean Foreign Minister Kang Kyung Wha, despite escalating tensions between the two countries, Kono agreed with her to keep an open channel of dialogue.