Japan plans to propose to North Korea a summit without asking for a guarantee of progress on the issue of Pyongyang's past abduction of Japanese nationals, based on Prime Minister Shinzo Abe's apparent shift in stance, government sources said Tuesday.

Tokyo plans to convey Abe's message that he is ready to meet with North Korean leader Kim Jong Un "without conditions," through the Japanese Embassy in Beijing and other various channels, according to the sources.

Abe has made it a top political priority to settle the long-standing issue of Pyongyang's abductions of Japanese nationals in the 1970s and 1980s. He has said previously that a future summit with Kim should yield progress on the abduction issue.

Abe apparently lowered that hurdle amid fears of seeing the issue take a backseat to North Korea's nuclear and missile issues. While U.S. President Donald Trump has raised the abduction issue during his meetings with Kim, no substantial progress has been seen.

It is immediately unknown how Kim will respond to Japan's proposal.

However, according to the sources, Kim did tell Trump during their second summit in Hanoi in February that he acknowledged the abduction issue is pending between North Korea and Japan and that he will meet with Abe "at some stage."

The comment, along with Kim's recent summit meeting with Russian President Vladimir Putin as part of his continuing diplomatic outreach, has helped bolster the view within the Japanese government that the North Korean leader may agree to sit down with Abe.

Kim has also held face-to-face meetings with other world leaders such as Chinese President Xi Jinping and South Korean President Moon Jae In. 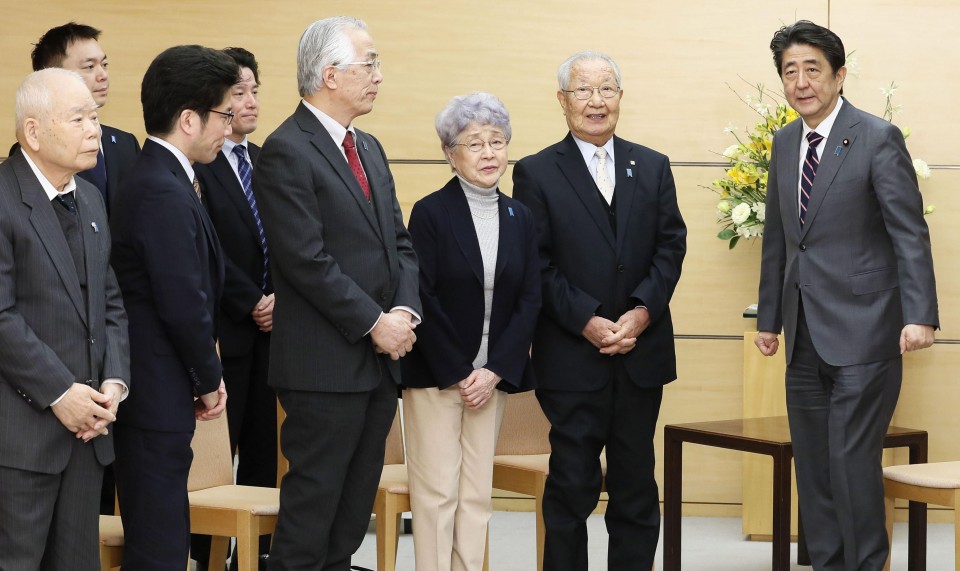 (Japanese Prime Minister Shinzo Abe (R) meets with a group representing the families of people abducted by North Korea, at his office in Tokyo on March 6, 2019.)

"There is a good chance that Mr. Kim will agree to meet the (Japanese) prime minister," a diplomatic source said.

When asked about a future Abe-Kim summit on Tuesday, Chief Cabinet Secretary Yoshihide Suga said nothing has been decided yet.

"The prime minister has said he will end the mutual distrust and meet with Chairman Kim to resolve the North Korean nuclear, missile problems, and most importantly, the abduction issue. His alluding to a summit without conditions reflects that determination more clearly," Suga said at a press conference.

Asked if the Japanese government has changed its policy toward North Korea, Suga indicated that Japan's goal to seek a comprehensive settlement of the nuclear, missile and abduction issues remains unchanged.

In a joint declaration issued in 2002 following a landmark meeting between then Japanese Prime Minister Junichiro Koizumi and North Korean leader Kim Jong Il, the two countries agreed to work toward the normalization of the relations by tackling outstanding problems, which include the abduction issue.

Japanese Foreign Minister Taro Kono said Tuesday that given Kim's top-down approach to making foreign policy decisions, "it's clear that Japan needs to hold a summit with North Korea in order to resolve the abduction issue, as well as the nuclear and missile issues."

Japan officially lists 17 citizens as abduction victims and suspects North Korea's involvement in many more disappearances. Five of the 17 returned to Japan in 2002.

In recent months, the Japanese government has shown some conciliatory gestures toward North Korea and forewent submitting a draft joint resolution condemning Pyongyang's human rights abuses to a U.N. panel for the first time since 2007.

"We will throw our support behind him so we can see a concrete path toward dialogue," Yamaguchi said.

In the Trump-Kim talks in Hanoi, no substantive progress was made on the denuclearization of the Korean Peninsula, and tensions were inflamed when North Korea on Saturday fired projectiles into the Sea of Japan.

Abe said Japanese and U.S. experts will analyze the nature of the launches.