Kim is quoted by the sources as telling Trump in Hanoi at the time that he acknowledges the issue is pending between North Korea and Japan, as well as saying "I will also meet with Prime Minister Shinzo Abe at some stage."

It is the first time Kim's remarks on the abduction issue during the second U.S.-North Korean summit have been revealed. Still, it remains unclear whether Kim is determined to resolve the issue that has been a sticking point in Japan's relations with North Korea for many years.

Japan officially lists 17 of its citizens as having been abducted by North Korean agents in the 1970s and 1980s but suspects their involvement in many more disappearances. Of the 17, five were repatriated in 2002.

Japan has said it will normalize relations with North Korea if North Korea abandons its nuclear and missile programs, and solves the abduction issue.

Trump told Abe of what Kim had said regarding the abduction issue when the U.S. and Japanese leaders spoke over the phone on Feb. 28 shortly after the second nuclear summit, which collapsed over mismatched demands on disarmament and sanctions relief.

Trump raised the issue with Kim on Feb. 27 both during a one-on-one meeting, only attended by their interpreters, and a following dinner that they had together with some officials, according to the sources.

Kim made the remarks after the abduction issue was brought up by Trump, the sources said.

Most likely, Trump and Kim did not spend much time discussing the issue as they largely focused on steps to denuclearize North Korea and bilateral affairs when they met in the Vietnamese capital.

But one Japanese government official said it is worth noting that Kim did not reiterate North Korea's long-standing position that the issue has already been settled. 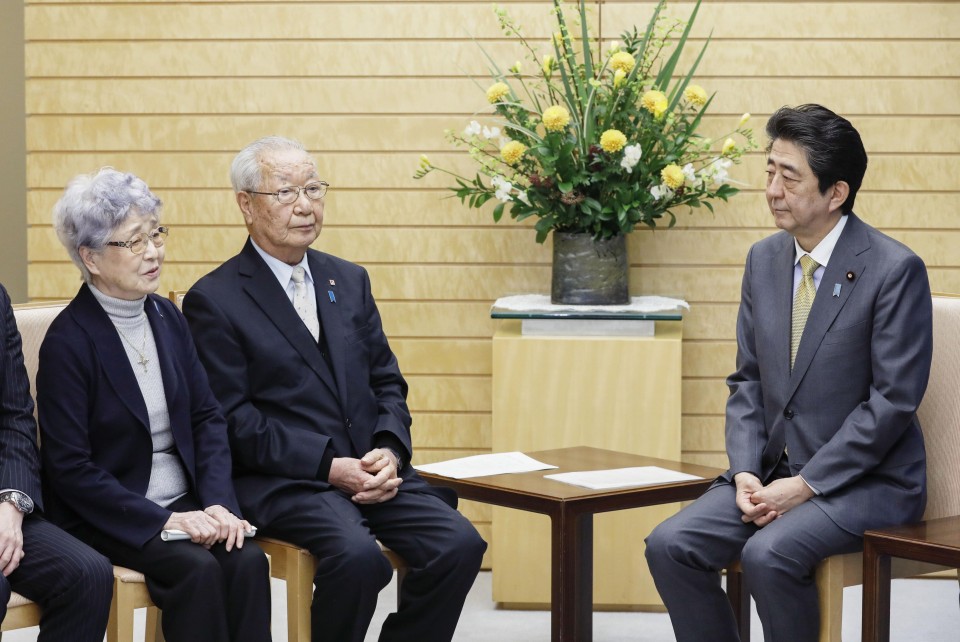 (Japanese Prime Minister Shinzo Abe (R) meets with members of a group representing abductees' families, at his office in Tokyo on Feb. 19, 2019.)

At Abe's request, Trump brought up the abduction issue also at his first summit with Kim in June in Singapore. Kim suggested he could meet with Abe at that time as well, Japanese government sources said earlier, but whether he said anything about the topic is not known.

For Abe, securing the return of all abductees has been one of his avowed political goals. However, among leaders of major countries dealing with the North Korean nuclear issue, he remains the only one who has not been able to hold talks with Kim.

After Kim met with Russian President Vladimir Putin for the first time in late April, Japanese government sources said that Abe has decided to seek talks with the North Korean leader without conditions, in a major policy shift.

Until then, after Kim began to engage in diplomacy with China, South Korea and the United States from last year, Abe had hoped to open dialogue with Kim on the condition that there would be progress on the abduction issue.