Japanese Prime Minister Shinzo Abe agreed Monday with U.S. President Donald Trump that their countries will seek a complete denuclearization of the Korean Peninsula by coordinating bilateral efforts "completely," after Pyongyang's firing late last week of projectiles into the sea.

Speaking to reporters after his phone conversation with Trump, Abe said Japanese and U.S. experts will analyze the nature of the projectiles, and that he is still willing to meet with North Korean leader Kim Jong Un "without conditions" despite the latest development. 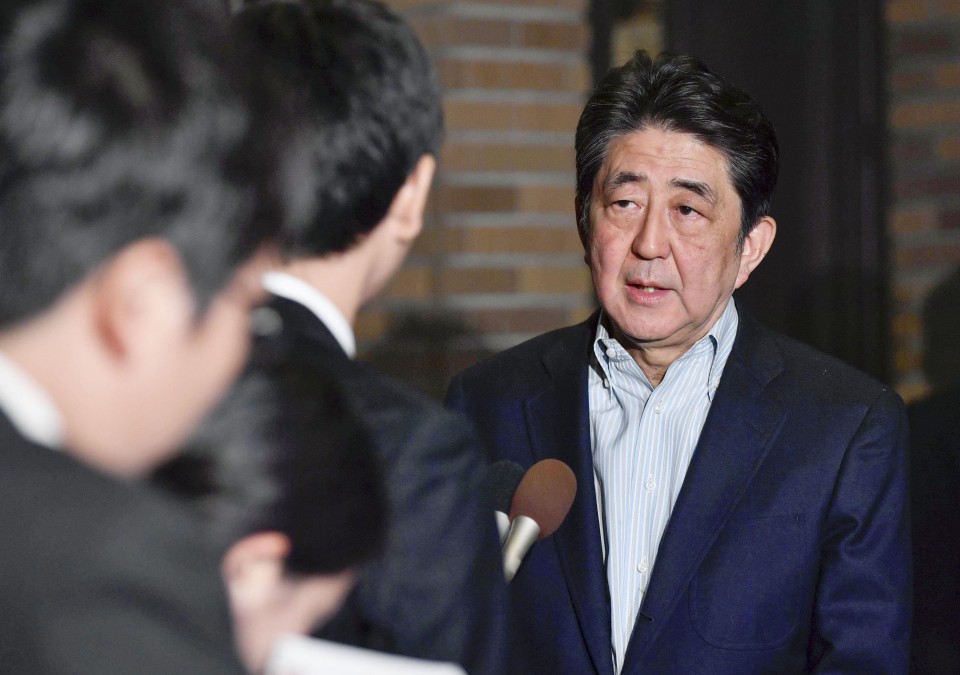 "President Trump and I agreed completely on every aspect of how we should deal with North Korea," Abe said. "We are on the same page completely that we will seek to have the agreement between the United States and North Korea (on denuclearization) implemented swiftly."

The White House said the two leaders reaffirmed unity on how to achieve the final, fully verified denuclearization of North Korea, and also discussed Trump's state visit to Japan in late May as well as regional and bilateral trade issues.

Trump emphasized his "strong support" for American farmers, it said, a sign that he may have urged Abe to reduce Japanese tariffs on American agricultural products.

North Korea launched the projectiles between 9:06 a.m. and 9:27 a.m. Saturday from an area around the Hodo Peninsula, near Wonsan, and they traveled between 70 and 200 km to the northeast before falling into the sea, South Korea's military said earlier.

South Korea's Defense Ministry has said the projectiles included a new tactical guided weapon, while some U.S. and South Korean military experts believe them to be short-range ballistic missiles.

North Korea is prohibited from conducting ballistic missile launches under U.N. Security Council resolutions and no such tests by the country have been confirmed since November 2017.

The launches followed a lack of substantive progress on the denuclearization of North Korea despite two high-profile summits between Trump and Kim.

The firing, seen as a sign of Pyongyang's frustration with Washington, came as Kim has stepped up diplomacy through face-to-face meetings with his foreign counterparts including Russian President Vladimir Putin.

After speaking with Trump, Abe expressed his willingness to meet with Kim to resolve the issue of Japanese nationals abducted by North Korea in the 1970s and 1980s, a top priority for him.

In a departure from his previous position, however, Abe said there would be no preconditions set for him to meet with Kim.

"To resolve the abduction issue, I myself need to face Chairman Kim without conditions," Abe said, adding that he will seize "every opportunity available" to settle the long-standing issue that has prevented the two countries from normalizing relations.