As the number of traditional public bathhouses in Japan dwindles, hand-painting the gigantic murals that decorate their walls -- most often featuring the country's iconic Mt. Fuji -- has become a dying art.

At age 83, Kiyoto Maruyama is one of only three bathhouse mural painting specialists left and the oldest among them. But there is hope of keeping the tradition alive, as he now has his first-ever apprentice. 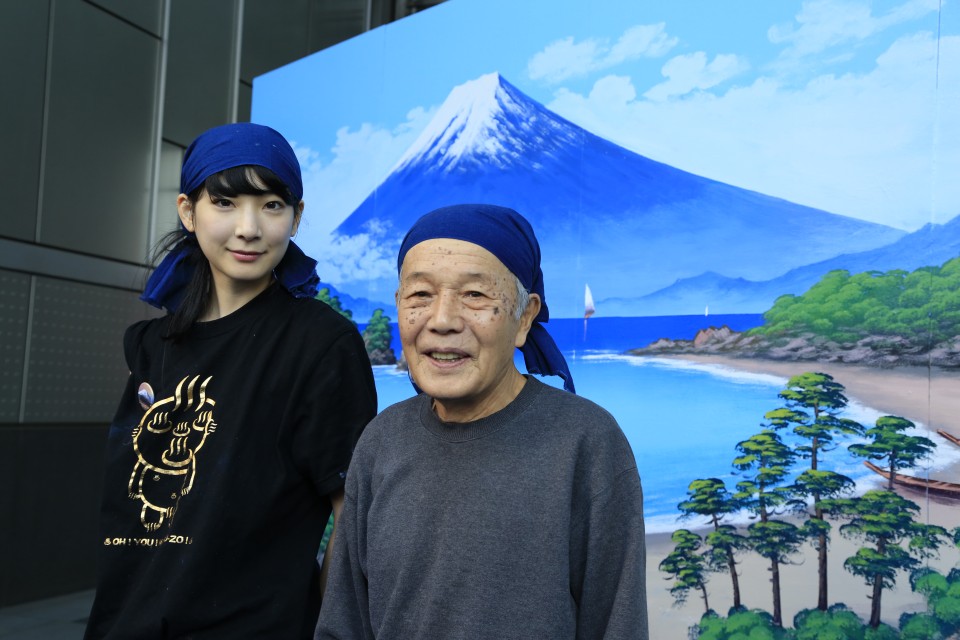 Maruyama’s decades-long career began when, at age 18, he landed a job at a company where a relative worked and which specializes in advertisements at public bathhouses.

Back in an era when many homes in Japan did not have their own baths, people frequented neighborhood bathhouses, known as "sento." The walls at the baths therefore became prime locations for advertisements, and the ad agencies would paint murals for free in the space above them.

Bathhouse murals are usually created using five bright colors such as white and blue. "Everyone comes here to relax and recover from fatigue, so we use quite a lot of blue hues to make it bright and lively," Maruyama explained.

Apprentices begin with painting blue skies in the background and it usually takes four to five years before one gets to take charge of an entire mural. 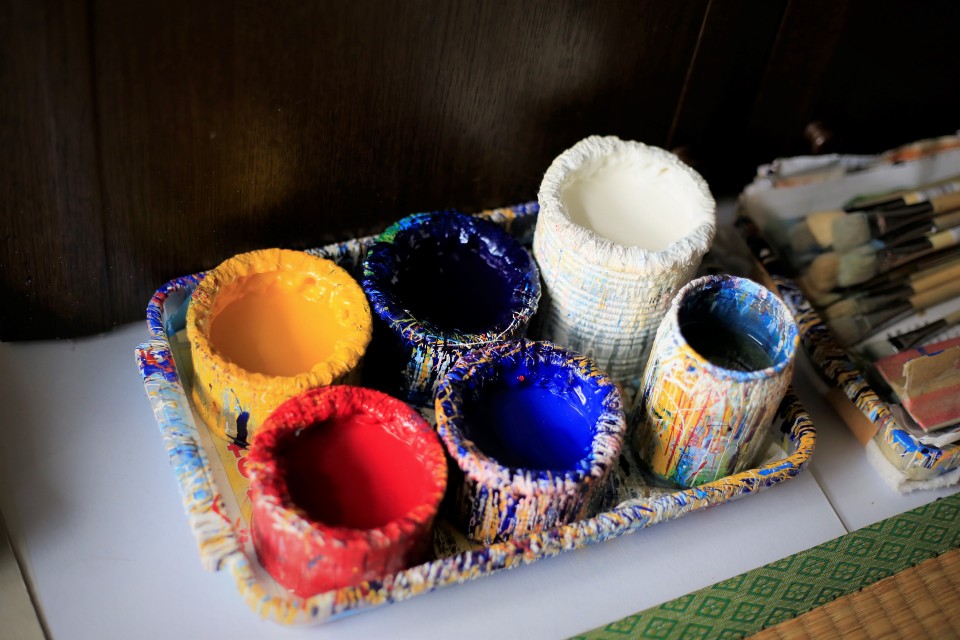 With fewer bathhouses standing, the octogenarian has fewer walls to paint nowadays. But Maruyama keeps himself busy by taking part in other sorts of events where people can watch him paint.

When he held an exhibition after turning 80, he also showed off artwork featuring darker shades -- such as sunrises and sunsets -- in stark contrast to the bathhouse murals he is famous for.

"Must have been a backlash to what I usually do," he said with a mischievous smile.

Interestingly, Maruyama said he rarely goes for a soak in the bathhouses where he has painted. "When I've just finished a mural I think to myself, this looks good enough. But then as time passes by, you start to see the flaws," he explained.

Maruyama said he has yet to achieve the perfect mural, and that he probably never will. "I continue aiming for it. That's what keeps me working hard."

On a warm autumn's day in mid-October, Maruyama worked on refurbishing the walls at "Yama no Yu," a public bathhouse that has been operating in Tokyo's Toshima district for over half a century.

"Painting the colors in gradation, for example, is quite difficult," said Maruyama as he stood on top of a wooden plank set between two ladders, casually thrusting his paintbrush as if it was a magic wand to skillfully depict the mountain ridges and slopes in various shades.

For the wall in the men’s bath, Maruyama painted Toyama Prefecture’s Tateyama Mountain Range while looking at a photo for reference. For Mt. Fuji on the wall of the women’s bath, however, he just went ahead freehand.

"Well, I’ve painted this (Mt. Fuji) many times over," he said with a laugh.

So why is Mt. Fuji, Japan's tallest peak, so popular at public bathhouses?

According to the Tokyo Sento Association, the story dates back to 1884, when a mural painter from Shizuoka Prefecture -- one of the two prefectures in central Japan which the 3,776-meter volcano straddles -- drew it on the walls of Kikai Yu, a bathhouse in what is now downtown Tokyo's Chiyoda district.

Word soon spread that the mural brings good fortune, and it is believed that other bathhouses soon began to follow suit.

Maruyama said that during his career, Mt. Fuji's popularity was further boosted by its listing as a UNESCO World Heritage site in 2013.

"Wherever I went, (the bathhouses) wanted me to paint Mt. Fuji," he said.

As Maruyama painted, 24-year-old Mai Katsumi had her eyes fixed on his every movement. 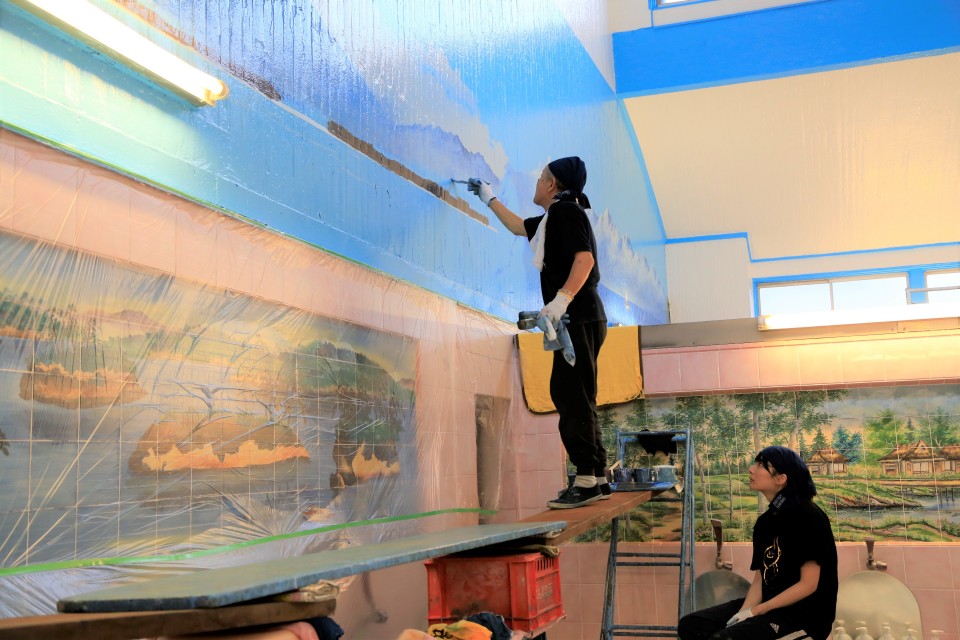 Katsumi, a graduate student at the Tokyo University of the Arts, said she was mesmerized by a dynamic Mt. Fuji mural at a public bathhouse she visited in second grade in elementary school.

"I too want to paint something like this when I grow up," she recalled thinking at the time.

After learning in junior high school about the existence of bathhouse mural painters, known as "sento eshi" in Japanese, she knew the path she wanted to take.

From her first year in high school, Katsumi studied at a preparatory school that specializes in passing entrance exams to art universities and later successfully enrolled at Musashino Art University.

When friends around her began to land job offers, Katsumi said she did feel a little worried about whether she could make a living as a mural painter. But convinced that "you only get to live once," she did not waver and stuck to her childhood dream.

Now apart from working as an apprentice to Maruyama, Katsumi also researches "paintings that form part of our daily lives" at graduate school and works as a fashion model on the sidelines.

"It's good to be with people who are creative," she explained. "They give me artistic inspiration." 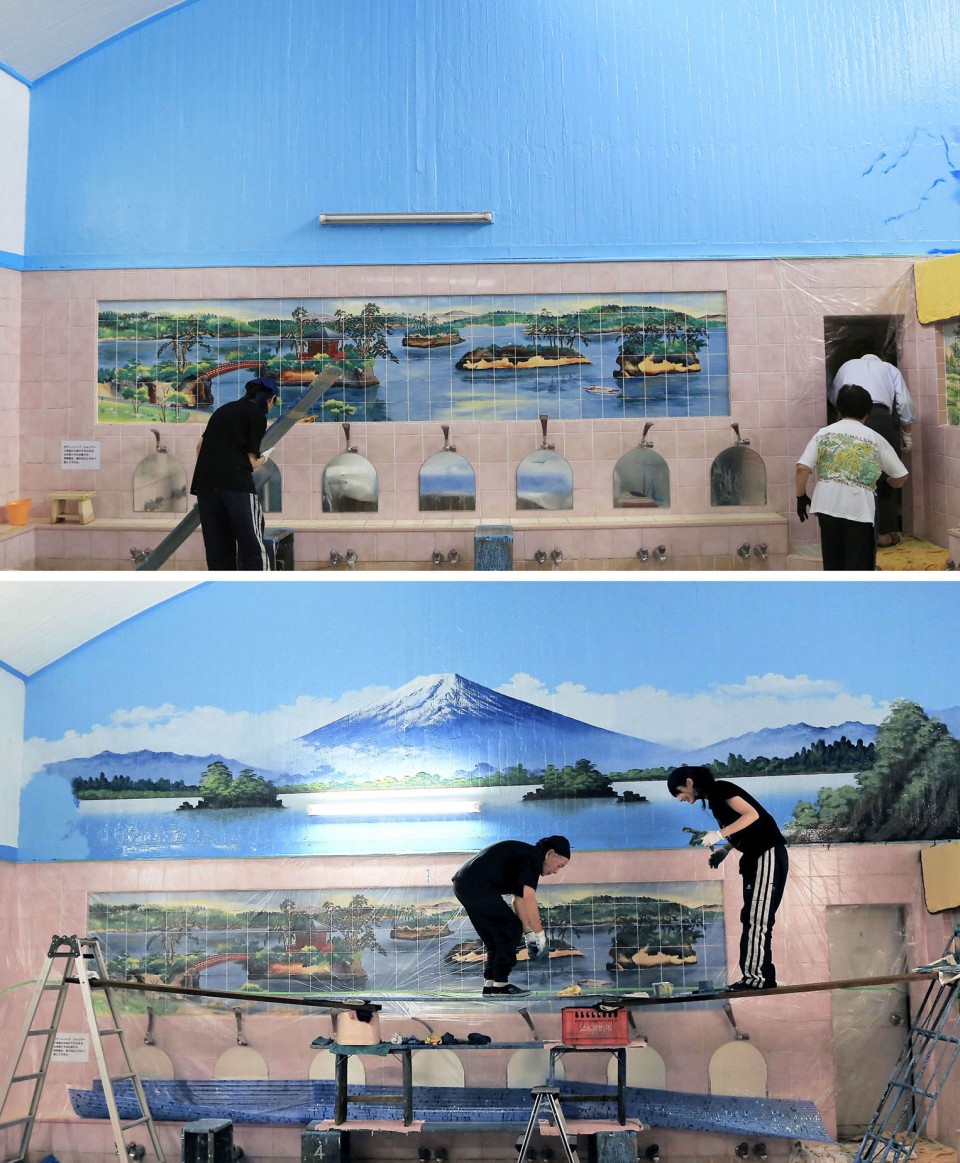 Maruyama praises his disciple for having a natural talent for the job, but Katsumi said, "I'm not there yet at all...I learned the basics in university, so I thought I could have done better. But unlike drawing on canvas, when you have to paint such a huge painting from a scaffold, you tend to lose track of the overall composition."

Right now, Katsumi is tasked with what Maruyama did when he first joined the world of sento murals as a teenager -- drawing rough sketches of skies and landscape in the background.

"Not bad!" Maruyama said as he looked at his apprentice's work. But the words of praise were soon followed by, "Oh, but the green should be a bit darker." 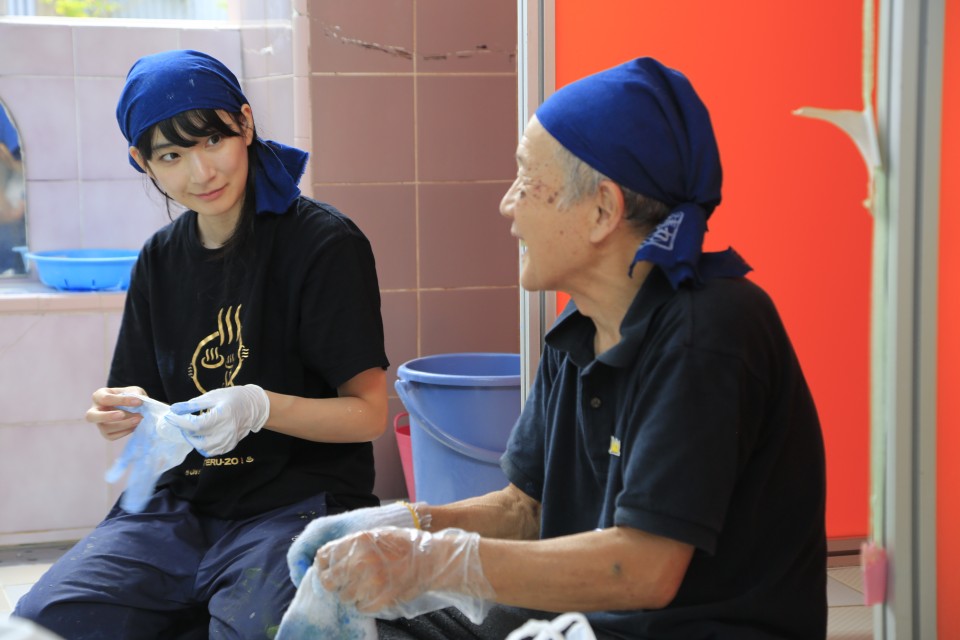 With the modernization of Japanese homes, visiting the sento has become a fading tradition. The number of traditional bathhouses in Tokyo alone dropped to 545 as of last autumn, down from its peak of 2,687 in 1968, according to tallies by the Tokyo Sento Association and others.

The lack of successors and funds to renovate aging facilities were among the most common challenges cited by bathhouse operators, and a growing number of places no longer have sento murals on their walls.

Recently, Maruyama's own granddaughter, also an art university student, has shown interest in following in her grandfather's footsteps and sometimes visits him at work.

"Guess I’ll have to hang on for a little longer," Maruyama said cheerily.

At the same time, however, he advises Katsumi, "Down the road, one won't be able to make a living just being a sento eshi. Make sure you also have other options."

Indeed, Katsumi is ready to explore her possibilities within and beyond the sento walls.

"I hope that one day I will be able to paint my own style of sento murals," Katsumi said. "Of course I am anxious about my future, but I believe that as long as I give it my all, I'll find a way." 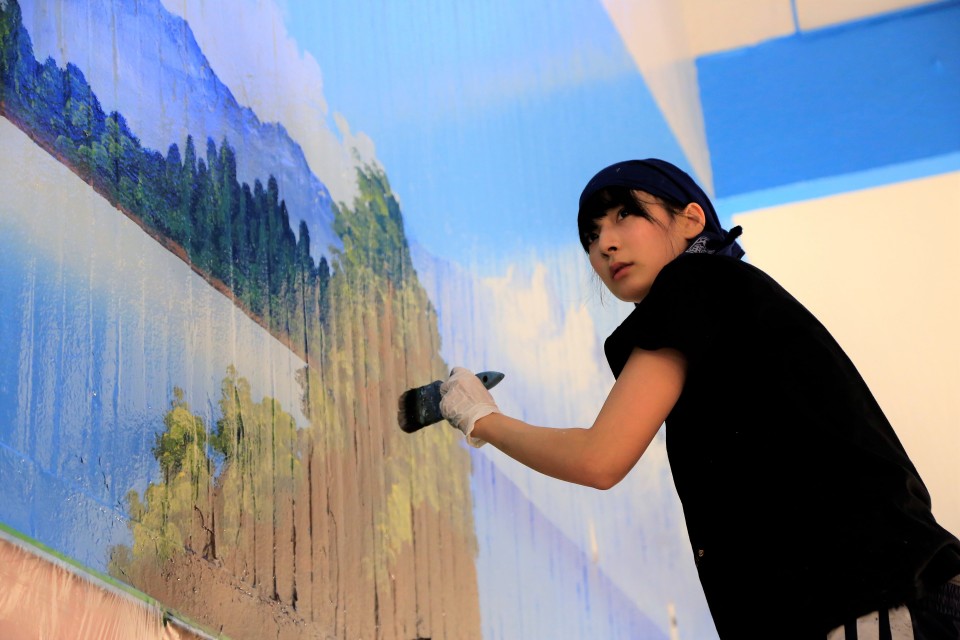