Life of a panda breeder is no walk in the park

Despite the workload and responsibility, being a giant panda breeder at a western Japan zoo is something 37-year-old Kimiyo Shintani takes great pride in.

Shintani's day centers around six giant pandas, including a 4-month-old female cub, kept at the Adventure World amusement park in the small resort town of Shirahama in Wakayama Prefecture. 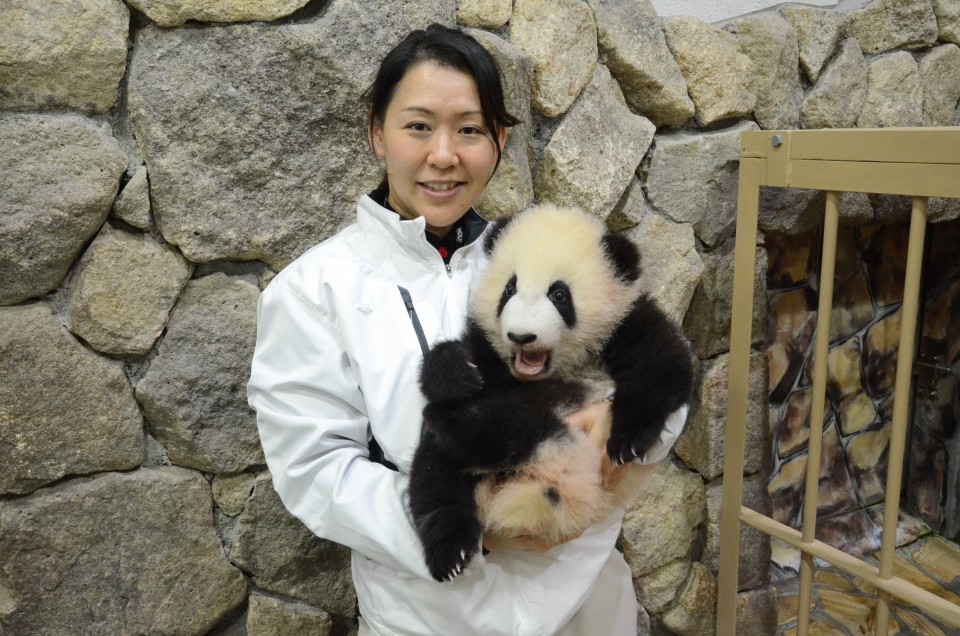 For both children and adults alike, the park operated by Osaka Prefecture-based AWS Co., is like a dreamland as it houses about 140 species of some 1,400 animals in total. Name your favorite animal -- lion, cheetah, African elephant, polar bear or penguin -- and you can likely find it at the park, which also features rides such as rollercoasters and a Ferris wheel.

But for Shintani, who belongs to the eight-member panda breeding team, being able to spend most of her day here is a dream come true.

"I lived in Osaka Prefecture, so I used to come here when I was very young. I fell in love with the animals, so I've always wanted to work with them," Shintani said in a recent interview with Kyodo News.

Shintani's ordinary day consists of taking care of the pandas, greeting visitors and organizing the panda displays with her team.

But with the birth last August of Saihin, the first panda born at the park in roughly two years, her job description has expanded to include nurturing the cub, the smallest born at the facility.

On a crisp day at the end of December 2018, one of the first things Shintani did was to take Saihin outdoors for a 10 minutes of sunbathing before the park opened its gates.

The cub is usually kept indoors at a breeding center so the operators can control her environment, including humidity and sanitation. But the breeders began taking Saihin outside every day in early December to expose her to sunlight so that she can produce the essential vitamin D necessary for healthy bone growth.

As Shintani held the cub with both hands, Saihin looked around curiously. The panda made loud, high-pitched cries as it inhaled the morning air. 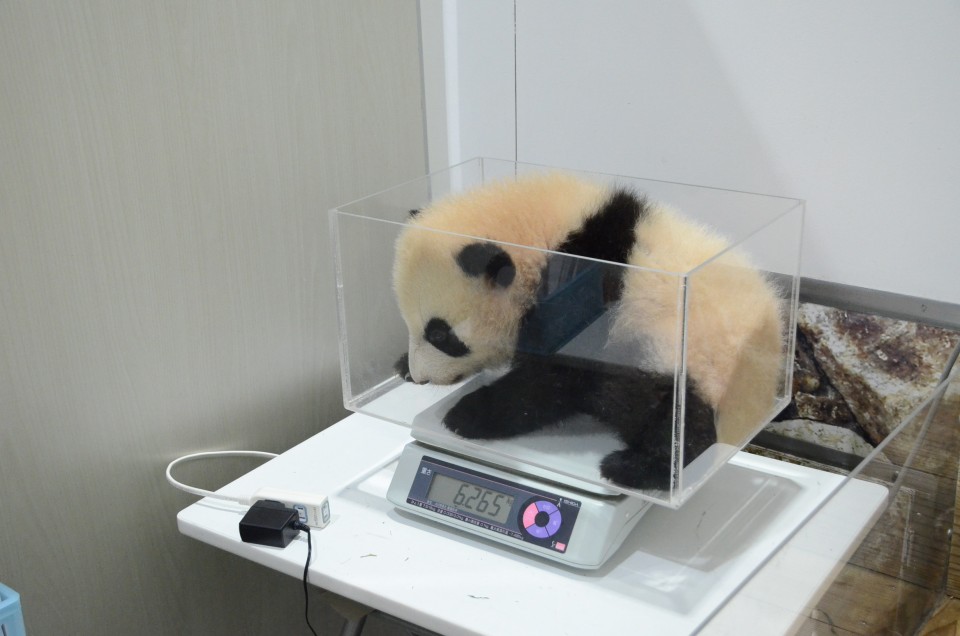 "She has grown so suddenly. I notice her growing when I don't see her for two or three days. And she started walking the day after she took her first step," Shintani said. "I think she will grow up before I even know it."

At birth, Saihin required round-the-clock care in an incubator. At 15.5 centimeters and 75 grams, she weighed 122 grams less than her mother Rauhin's previous cub Yuihin born in 2016.

Saihin was too weak to drink from her mother's teat so breeders had to feed her using a dropper.

"When I first saw her, I was really worried if she'd be all right. Her body temperature was very low so all we had in mind was keeping her warm," Shintani said of the cub, who was pink with white hair when she was born.

"I was praying she will survive the first week. I thought things would look up if she got through the week."

The breeders' efforts bore fruit and the cub has grown stronger and healthier. Saihin had breastmilk from her mother two days later, and her weight rose over 1 kilogram the following month.

While she still requires the breeders to massage her several times a day around the hip to stimulate excretion, she can do more and more by herself. Now over 6 kilograms and 79 centimeters in length, Saihin can be seen walking on four limbs and playing with her mother during the limited time they are kept together.

The baby cub is by far the most popular attraction at the park, with a long line of visitors forming to get a glimpse of the newborn.

Once Saihin and mother Rauhin, 18, appear, the two win the hearts of the crowd instantly. Visitors voice how "kawaii" or cute the pair are, snapping photos with their smartphones and cameras. Shintani and her crew give brief explanations about the pandas.

Giant pandas have captured the imagination of the Japanese public even though pandas are only kept at two other parks besides Adventure World. Kobe Oji Zoo in western Japan is home to one panda, while Ueno Zoological Garden has three, including a female cub Xiang Xiang born in 2017.

The difficulty of getting pandas to reproduce and of taking care of newborns has been a major headache for people working to increase their number. Females have a very narrow window in which they can conceive. Furthermore, in the wild, more than half of all newborn cubs die within the first week, according to zoo officials.

Xiang Xiang stole headlines around the nation when she was the first cub to be born at the Tokyo zoo since 2012. The previous baby, the first in 24 years, had died six days after birth.

The situation in Shirahama is nearly the opposite. Rauhin, who was also born at the park, has given birth to a cub every two years since 2008 through natural mating with partner Eimei, and she is the mother of nine pandas.

Adventure World borrowed Eimei and another female panda on a breeding loan in 1994 and began a collaborative study with the Chengdu Research Base of Giant Panda Breeding.

Since then, the two institutions have worked hand in hand. Breeders in Shirahama keep detailed data on the giant pandas to estimate when Rauhin goes into estrus, or a state of sexual receptivity, so they can join her with Eimei, whose age is equivalent to over 70 for human beings. Experienced staff members from the Chinese side come to Adventure World weeks before the birth to help out.

As a result, the park has become the most successful facility in the world, aside from those in China, in terms of the number of successful births. The 26-year-old Eimei, a father to 15, is the world's oldest male panda in captivity to have successfully produced offspring through natural breeding.

Eleven Shirahama-born cubs have been sent to the Sichuan Province facility for mating. 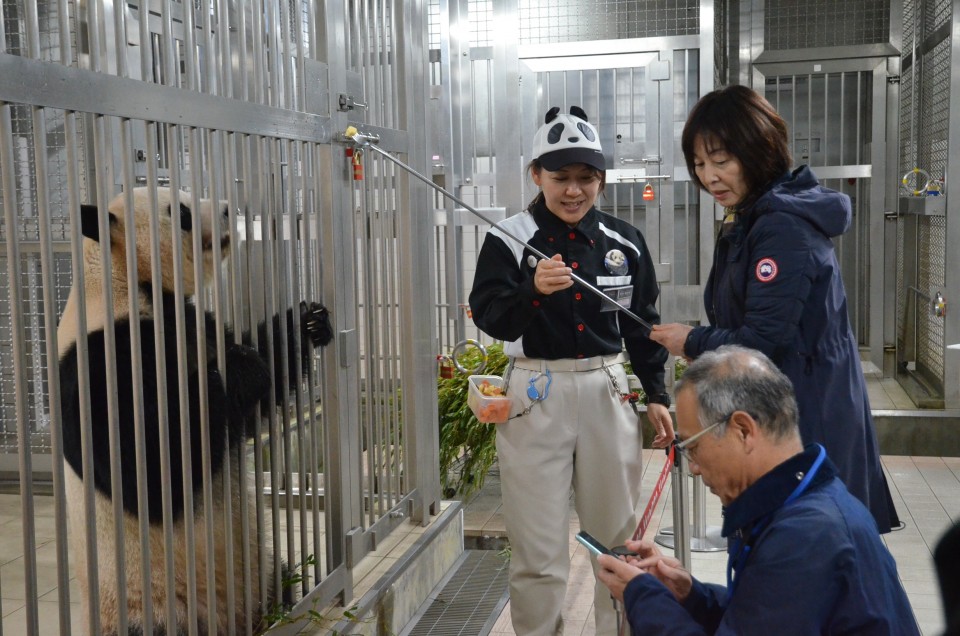 But Shintani's work does not just revolve around the cub. When she is not working at a breeding center where Saihin, Rauhin and father Eimei live, she can be seen at a facility where the cub's sisters -- Yuihin, Touhin, and Ouhin -- are kept.

She says the most difficult thing about raising pandas is to accommodate their finicky eating habits. Giant pandas eat 15 to 20 kilograms of bamboo every day, but the breeders provide them with double or triple the amount to give the pandas the luxury of choosing what to eat.

"In my opinion, pandas are very strange animals. They are similar to sea otters in a way, but they don't eat their food if they don't like it," Shintani said. "Other animals eat whatever we give them without giving that much consideration to the taste."

"We usually check how the bamboo looks, like the condition of the stems and leaves," she said. "But in the end, we just observe what kind of bamboo they tend to eat. Their favorite type changes from day to day, so we give what we believe they will enjoy."

In order to meet the high demand, park staffers drive to Osaka Prefecture twice a week to fill a truck with roughly 300 kilograms of bamboo. It is the job of breeders to wash and sort it.

Shintani has looked after many animals since she joined the park operator. For eight-and-a-half years she was in charge of dolphins and was a part of a dolphin show.

"The two animals are both mammals so there isn't much difference in what we do," she said with a smile. "But it feels like keeping pandas is a team effort, while dolphins felt more independent. We can talk among the team and cover for each other (with the pandas)."

She hopes to stay in charge of the giant pandas for a while -- even as long as she looked after the dolphins.

"I want to be a breeder who can understand the feelings of both the giant pandas and our customers," she said. 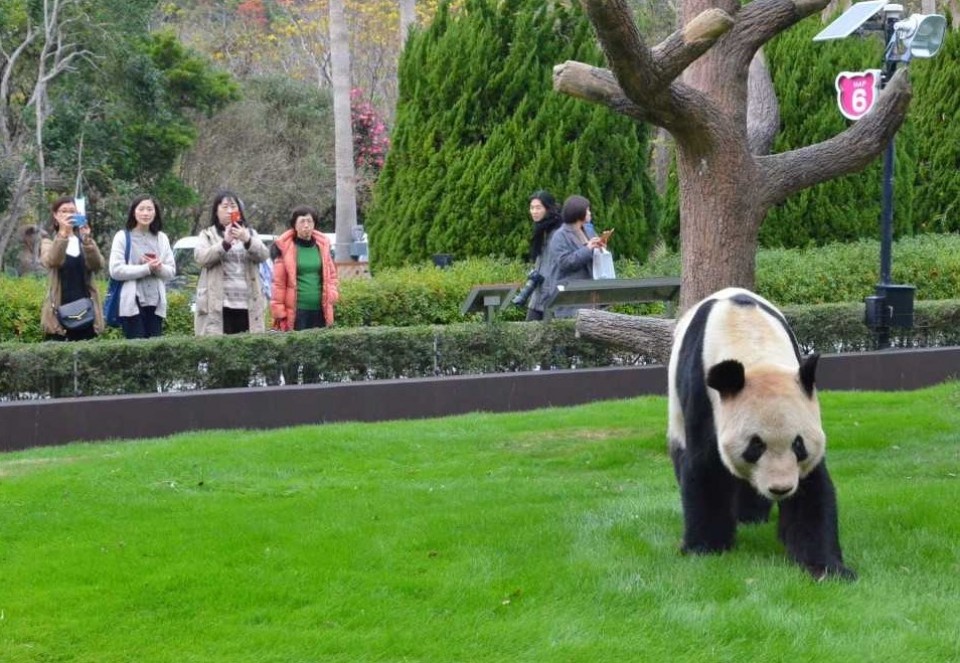 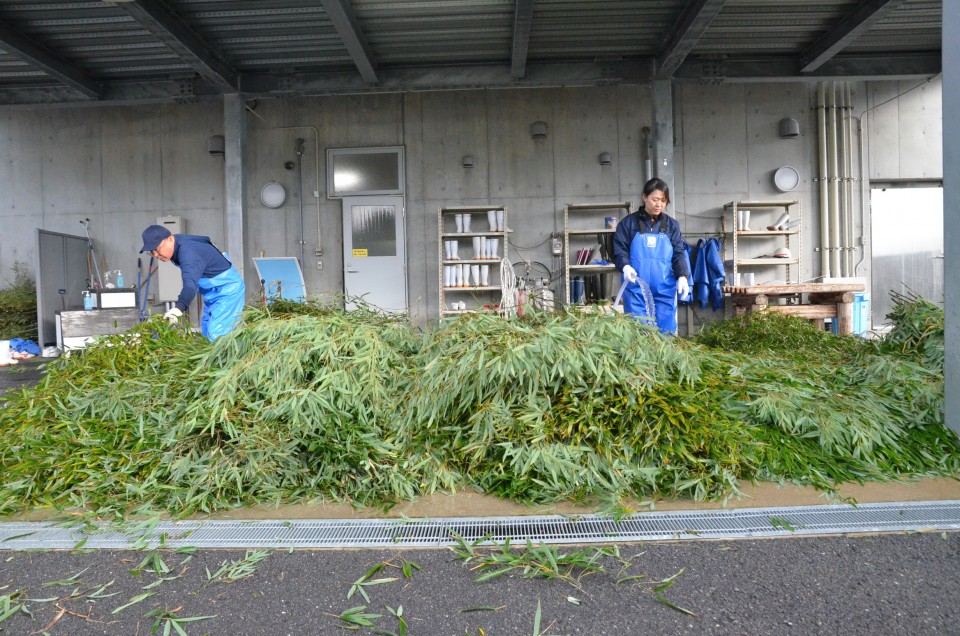 (Shintani, R, washes bamboo that will be fed to giant pandas)