Concerns of a sharp rise in virus infections have spread in China just days after the country significantly eased its stringent "zero-COVID" policy amid public frustration, with many casting doubt on the accuracy of official counts as frequent testing is no longer required.

China said Friday it confirmed about 16,000 new infections the previous day, down sharply from record-high levels of nearly 40,000 daily cases in late November.

But many citizens believe the figure does not reflect reality, with Hu Xijin, outspoken former editor-in-chief of the Chinese Communist Party's Global Times tabloid, saying on social media, "I don't believe this number is real, and probably no one will believe it."

With the strict restrictions having been lifted, domestic travelers are expected to increase during the year-end and the Chinese New Year holidays in late January, raising the risk of a further spread of the virus. 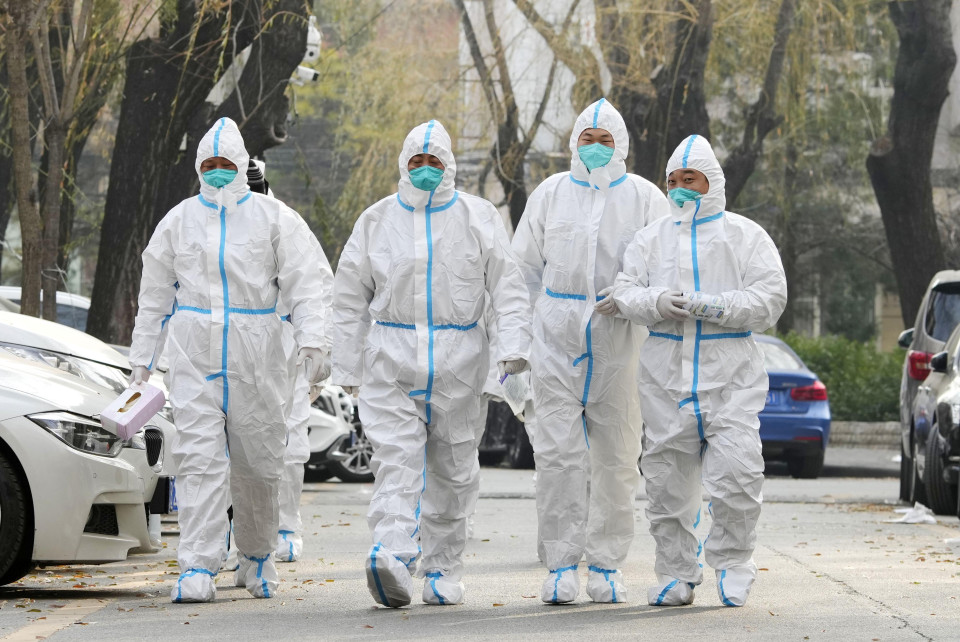 Health officials in protective gear walk in a residential area in Beijing on Dec. 9, 2022. (Kyodo)

A major Chinese news magazine carried an expert's forecast that the number of infections will start to rise sharply one month after the major relaxation of the anti-virus steps, referring to trends in Hong Kong after the territory eased its restrictions.

In Beijing, an increasing number of people who develop a high fever are opting not to take PCR tests and are instead recuperating at home -- a measure allowed under the newly eased regulations. With negative test results no longer required to get access to public places, the number of people screened for the virus is expected to decline.

On Friday, long queues were formed at a hospital treating patients with a high fever as well as pharmacies selling cold medicines in central Beijing.

At the Chinese Foreign Ministry, only about 20 journalists attended a daily press conference as many could not fulfill the requirement of presenting a negative test result issued within 24 hours.

Over the past several days, a number of people in Beijing have complained that their test results have not shown up on their smartphone app, with health authorities explaining it was because they turned out to be suspected cases.

At PCR testing sites, samples of 10 people are usually screened together. When tests come back positive, their app will not update proof of a negative test result and authorities conduct fresh examinations on them one by one.

Foreign media have called on the Foreign Ministry to remove the 24-hour requirement as many public places no longer require negative test results for entry.