The U.N. Security Council remained split Friday over how to deal with North Korea's continued launches of ballistic missiles, failing to overcome the gap among veto-wielding permanent members.

The United States noted during a session that 13 of the 15 members of the council have moved to take punitive action against North Korea, which has continued with test-launches of ballistic missiles in defiance of the council's past resolutions.

But Pyongyang has enjoyed "blanket protection" from the two other members of the council, U.S. Ambassador to the United Nations Linda Thomas-Greenfield said, in reference to China, a key benefactor of North Korea, and Russia. 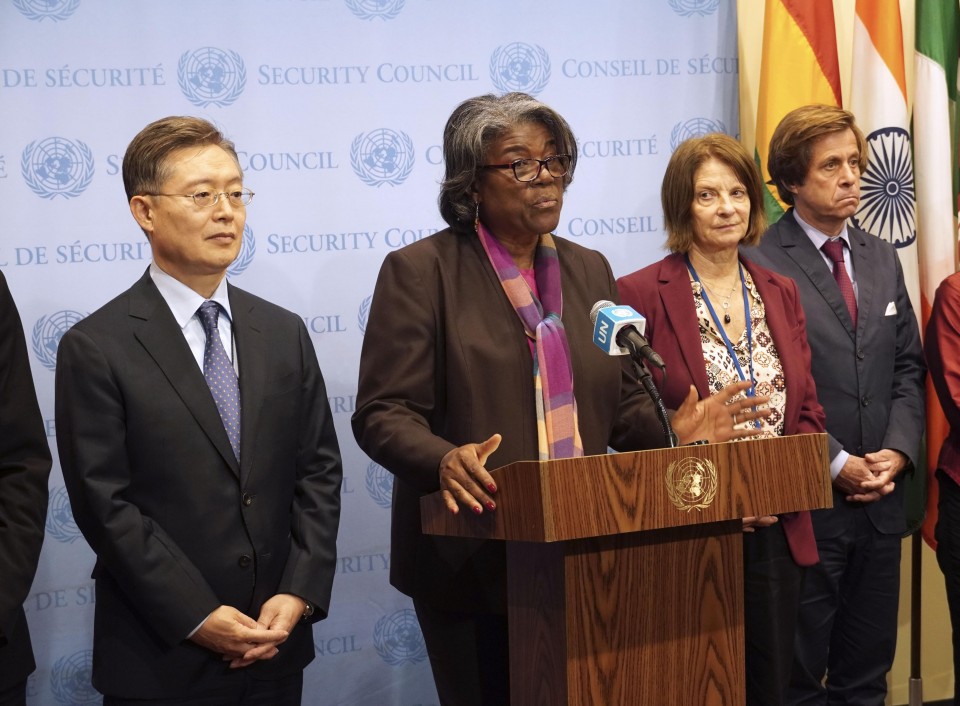 U.S. Ambassador to the United Nations Linda Thomas-Greenfield (2nd from L) speaks to reporters after a Security Council session at the U.N. headquarters in New York on Nov. 4, 2022. (Kyodo)

China and Russia argued that joint military drills by the United States and South Korea have increased tensions surrounding the Korean Peninsula.

"The DPRK's recent launch activities did not happen in isolation, and they are directly linked to the words and deeds of relevant parties," Chinese ambassador Zhang Jun said, using the acronym of North Korea's formal name, the Democratic People's Republic of Korea.

Kimihiro Ishikane, the U.N. ambassador from Japan, urged the Security Council to act as one, saying North Korea's violations of past resolutions "followed the council's long inaction due to the negative attitude of some council members."

Pyongyang has been test-firing various missiles at an unprecedented pace, with Thursday's launches marking the 30th such occasion this year.

Last month, the council failed to take coordinated action, such as adopting a statement, after North Korea fired a ballistic missile that flew over Japan into the Pacific Ocean.

In May, China and Russia vetoed a U.S.-drafted Security Council resolution aimed at strengthening economic sanctions on North Korea.