Kazuyoshi Miura on Tuesday urged Japan's World Cup squad to write a new chapter at the scene of one of the Samurai Blue's most painful results, drawing parallels with a famous loss by Brazil that catalyzed the South American country's soccer ascent.

The 55-year-old is in Qatar for the first time since playing in the 1993 Asian qualifier still remembered in Japan as the "Tragedy of Doha" -- a 2-2 draw with Iraq which saw the Samurai Blue fall short of a maiden World Cup berth in 1994 on goal difference.

That traumatic result, which came about after Miura's team conceded a stoppage-time equalizer, has played a similar role in the development of Japanese soccer as Brazil's 2-1 loss to Uruguay in the 1950 World Cup final-round game, according to the evergreen striker. 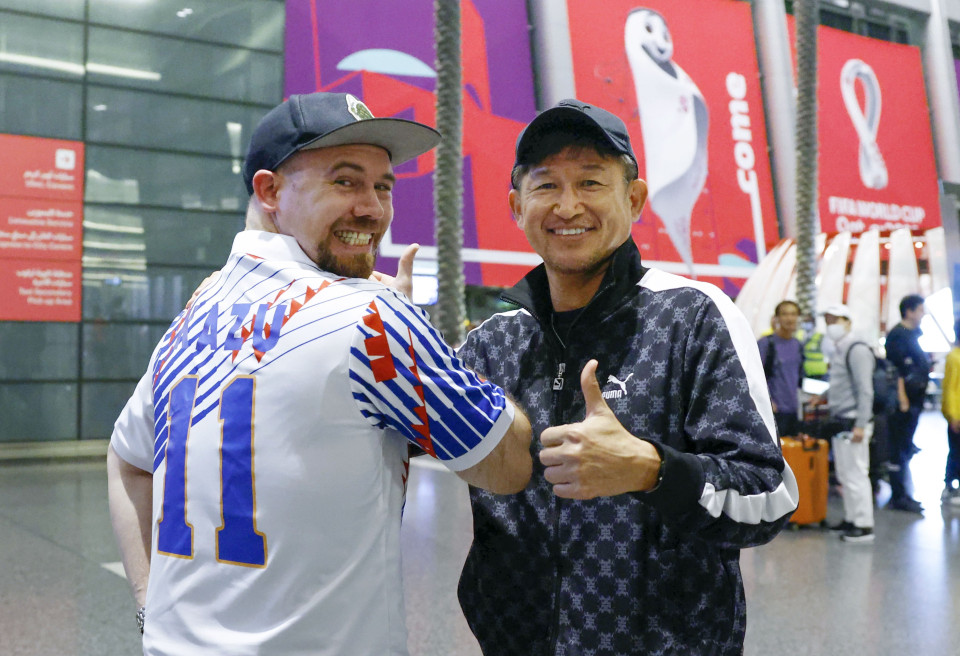 Former Japan striker Kazuyoshi Miura (R) poses with a fan wearing a national football team shirt with his name on the back at an airport in Qatar's capital Doha on Nov. 22, 2022. (Kyodo) ==Kyodo

After missing out on their first World Cup title at Rio de Janeiro's iconic Maracana Stadium, the Brazilians went on to win the tournament a record five times.

"Brazil got stronger as their desire to win the World Cup got bigger. That's the origin of the Selecao," said Miura, who made his professional debut in Brazil with Santos.

Japan went on to make their World Cup debut at the 1998 tournament in France, the first of seven straight appearances, although Miura was a shock late omission from the squad.

"The Tragedy of Doha is Japan's equivalent (of Brazil's 1950 loss)," said Miura, who scored 55 goals in 89 games for his country. "Japan have also been making their new history in these past 29 years."

Still active at Japanese fourth-tier side Suzuka Point Getters, where he ended his 37th pro season with two goals with a penalty and header, "King Kazu" urged the current national side led by his 1993 Doha teammate Hajime Moriyasu to savor the occasion.

"We were almost confined inside our hotel (in 1993). I can recall the memory," said Miura, who posed for a photo with a smile next to a fan wearing the shirt from that time.

"There'd be pressure, obviously, but this is a festival and I want them to enjoy it."

Miura will be at the venue to watch Japan's Group E opener against Germany on Wednesday and also plans to see Brazil take on Serbia in Group G on Thursday.