Japanese football icon Kazuyoshi Miura is set to revisit Doha for the first time since 1993, when he was involved in one of his country's most painful sporting results, as an ambassador for a sponsor of the World Cup in Qatar.

Miura, who twice missed out on football's biggest stage, suffered the first setback that year in what is still known in Japan as the "Tragedy of Doha," and hopes to see Japanese football come full circle there this autumn. 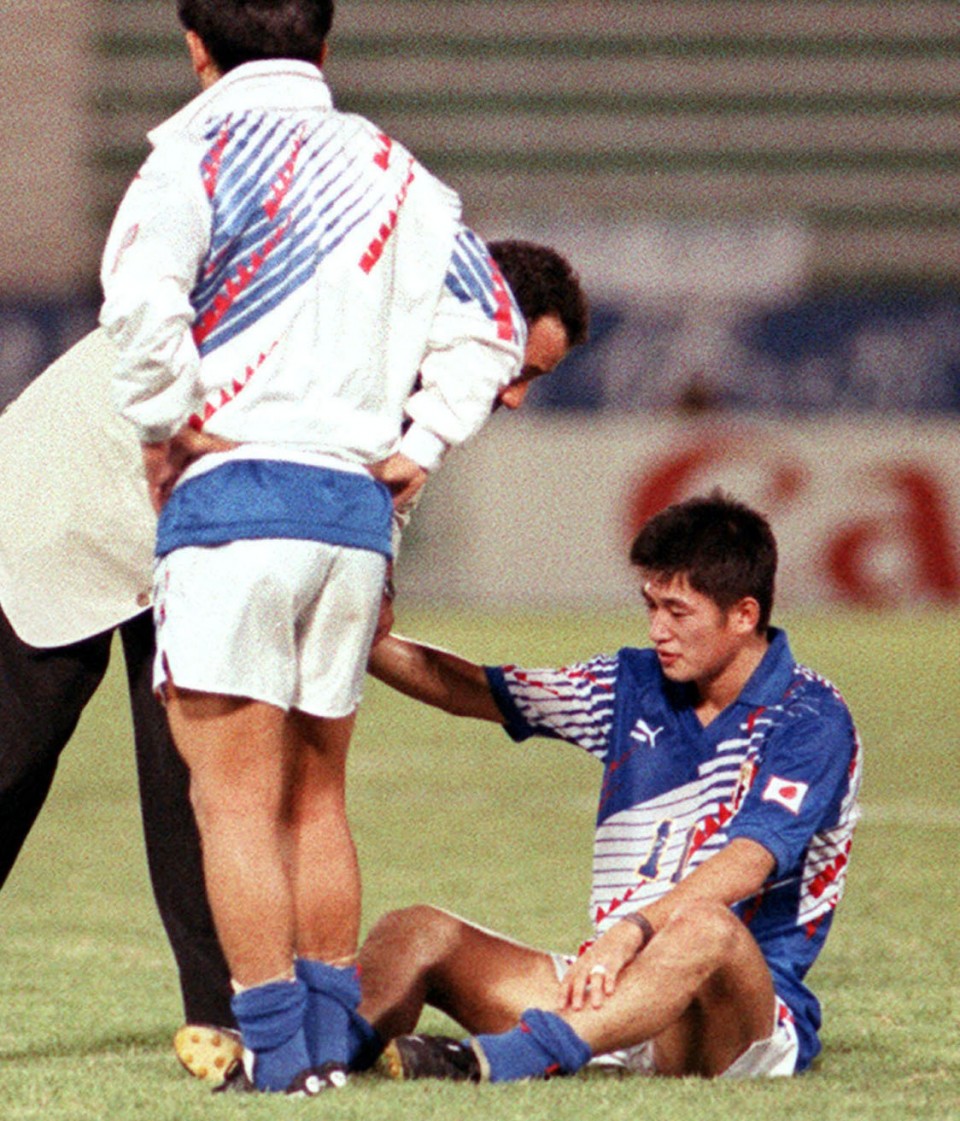 File photo taken Oct. 28, 1993, shows Kazuyoshi Miura (R) sitting on the pitch at Al-Ahli Stadium in Doha after Japan's hopes of qualifying for the 1994 World Cup finals in the United States ended with a shock draw against Iraq. (Kyodo)

Japan's oldest active professional player at 55, now with the fourth-tier Suzuka Point Getters, Miura also fell short of what he calls "the pinnacle of football" in 1998.

Miura personified the sport's rise in Japan and the national team's burgeoning popularity following the J-League's first full season in 1993, and he is proud of the path the country has since taken, including his own role in the sometimes tragic story.

"The developments of the J-League and the national team have created a good synergy over the past 30 years," the forward told Kyodo News recently. "Regarding the World Cup, I believe it all began with, and has been built on, the Tragedy of Doha." 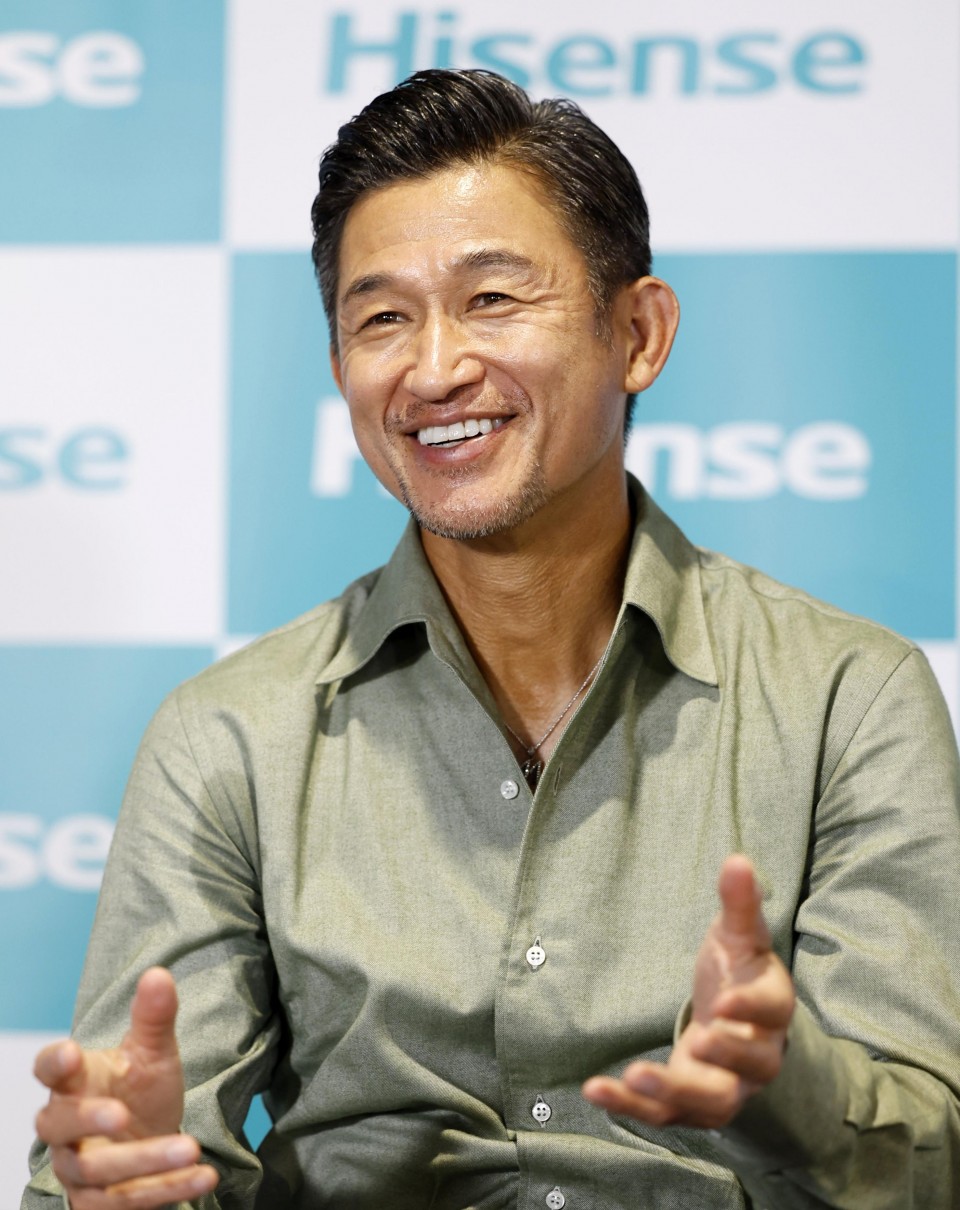 Just minutes from clinching the country's first World Cup berth, for the 1994 tournament in the United States, Japan's hopes were dashed when Iraq scored a stoppage-time equalizer to end their game in the Qatari capital 2-2. The result saw Japan miss qualification on goal difference.

In 1998, Miura, who scored 55 goals in 89 games for Japan, was controversially dropped from the World Cup squad just over a week away from the tournament's start in France.

"I can still dream about (the World Cup) the same way as I used to, even now at 55," Miura said. "The sense of its scale never fades. It's a tournament that can keep a player forever longing for it."

Current Japan manager Hajime Moriyasu was also on the pitch in Doha in 1993, and Miura said his former teammate exhibits the same traits now as Samurai Blue boss that he showed as a defensive midfielder.

"He always supported the team while staying a step back," Miura recalls. "As a manager too, he's giving credit to the players, letting them perform. (His strengths) remain the same."

Miura remembers watching the World Cup for the first time as a 15-year-old, when the 1982 tournament was held in Spain. The star-studded Brazil side featuring the likes of Zico and Socrates left a deep impression on the youngster, who soon traveled alone to the South American country, where he eventually started his pro career with Santos.

After Japan exited the 2018 tournament in Russia, throwing away a 2-0 lead in a late 3-2 comeback defeat to Belgium in the round of 16, Miura received a stark appraisal of the country's performance from a friend in Brazil.

"My Brazilian acquaintance used the expression that 'Japan are ignorant' and 'don't know football,'" said Miura.

But he is optimistic about the national team's progress under Moriyasu and believes Japan will rise to new heights at the Nov. 20 to Dec. 18 World Cup.

"We have a team with players at big European clubs, centered around captain Maya Yoshida," he said. "It'll be about whether we can control the game in genuine terms. I hope Japan can show the world they have matured over the past four years."

Football: "King Kazu" to play on in J-League top flight at age 54