Japan manager Hajime Moriyasu's World Cup selections on Tuesday underlined that playing for teams leading top European leagues, or in the Champions League, no longer guarantees a spot in the national squad.

Moriyasu gave maiden World Cup call-ups to 19 players, including 10 who he managed at the Tokyo Olympics, pinning his hopes on the fresh-looking side to rise to the biggest of occasions in Qatar. 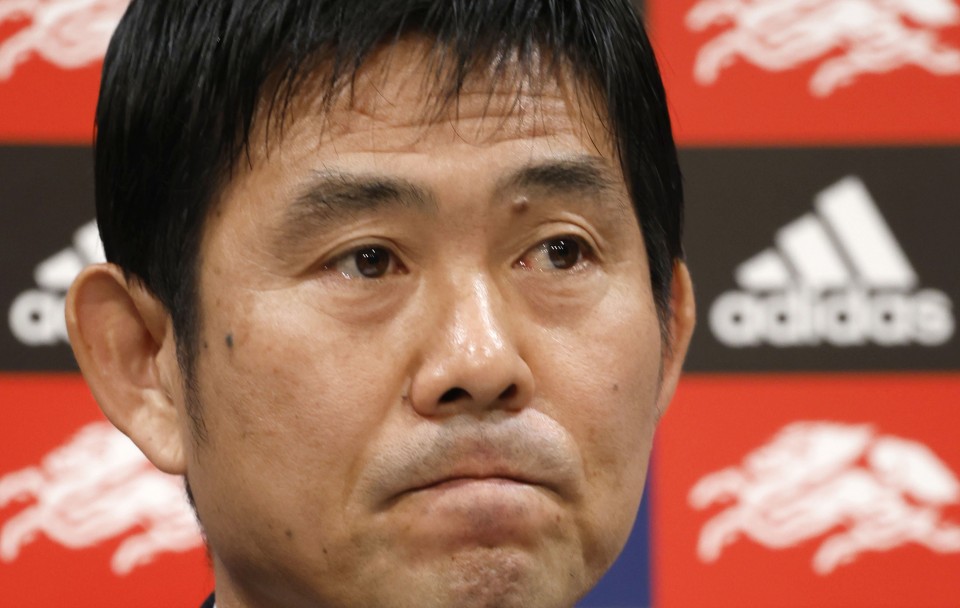 Hajime Moriyasu, manager of the Japanese men's national football team, is pictured before announcing his 26-man squad for the World Cup finals in Qatar at a hotel in Tokyo on Nov. 1, 2022. (Kyodo) ==Kyodo

"I'm confident I've selected the best players," said Moriyasu, whose team is bidding to make the quarterfinals of the World Cup for the first time.

Playmakers Takefusa Kubo and Ritsu Doan, along with defenders Ko Itakura and Takehiro Tomiyasu, were among the players who finished fourth at the home Olympics under Moriyasu in the summer of 2021.

None of the exclusions matched the shock of Kazuyoshi Miura's omission in 1998 or Shunsuke Nakamura's in 2002, with former Liverpool man Takumi Minamino making the final 26-man list despite struggling since his summer move to Monaco.

Moriyasu was nevertheless bold with some of his selections, including leaving out his main forward during the final stage of Asian qualifying, Yuya Osako.

The 32-year-old Vissel Kobe man, who made the last two World Cups, spearheaded Japan's attack in the first eight of 10 final-stage qualifiers but was not recalled after being sidelined by injury in March. 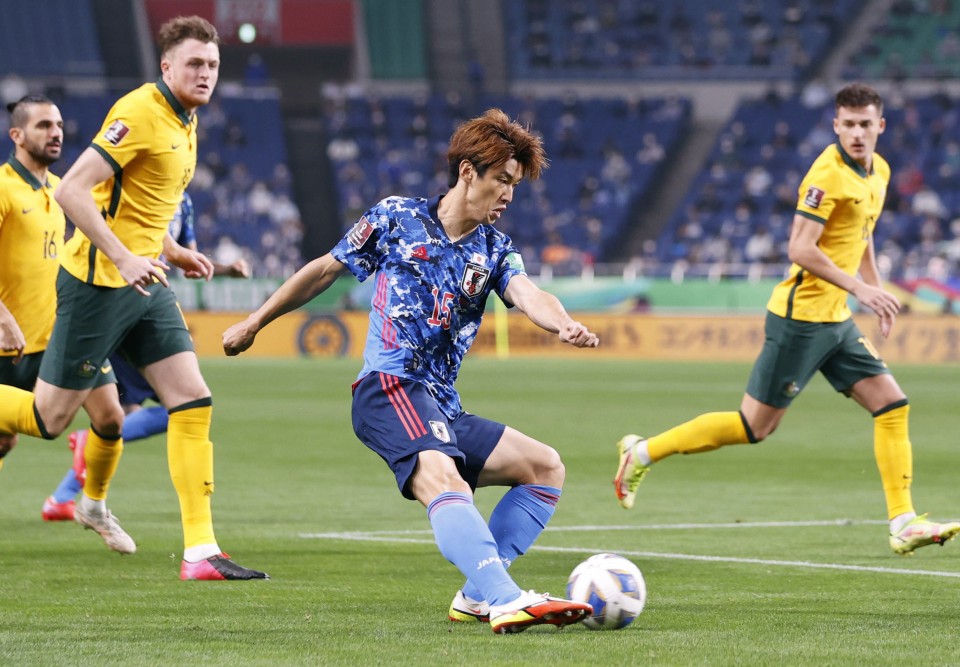 Japan's Yuya Osako (C) is in action during the first half of a Group B football match against Australia on Oct. 12, 2021, at Saitama Stadium in Saitama, near Tokyo, in the final group-phase round of Asian qualifying for the 2022 World Cup in Qatar. (Kyodo) ==Kyodo

The former Werder Bremen player was limited to substitute appearances through July in the J-League but kept scoring and has been nearing his best since returning from a monthlong layoff in mid-September, playing a vital role in saving Kobe from relegation.

His direct replacement, Tokyo Olympian Ayase Ueda, has yet to net for the senior side and may be asked to bring his teammates into play as Osako did. It is a big hole to fill in his first World Cup, but Moriyasu is standing by his decision.

A planned press conference for Osako at Kobe's Noevir Stadium was called off.

His versatility and robust character could have been assets to the side, but Moriyasu opted to stick with 30-year-old Gaku Shibasaki, who came under fire after his mistake gave Saudi Arabia a 1-0 win in October 2021.

"We gathered the data of players from this season, as well as those from their best seasons in the past," Moriyasu said. "We've considered several scenarios in making the decision."

Celtic pair Kyogo Furuhashi and Reo Hatate were also overlooked despite their strong starts to life in Scotland.

Furuhashi has flourished under Ange Postecoglou since joining in the summer of 2021, although the former Vissel Kobe forward has been unable to replicate his scoring touch from last season domestically, and has also gone five games without a goal in the Champions League. 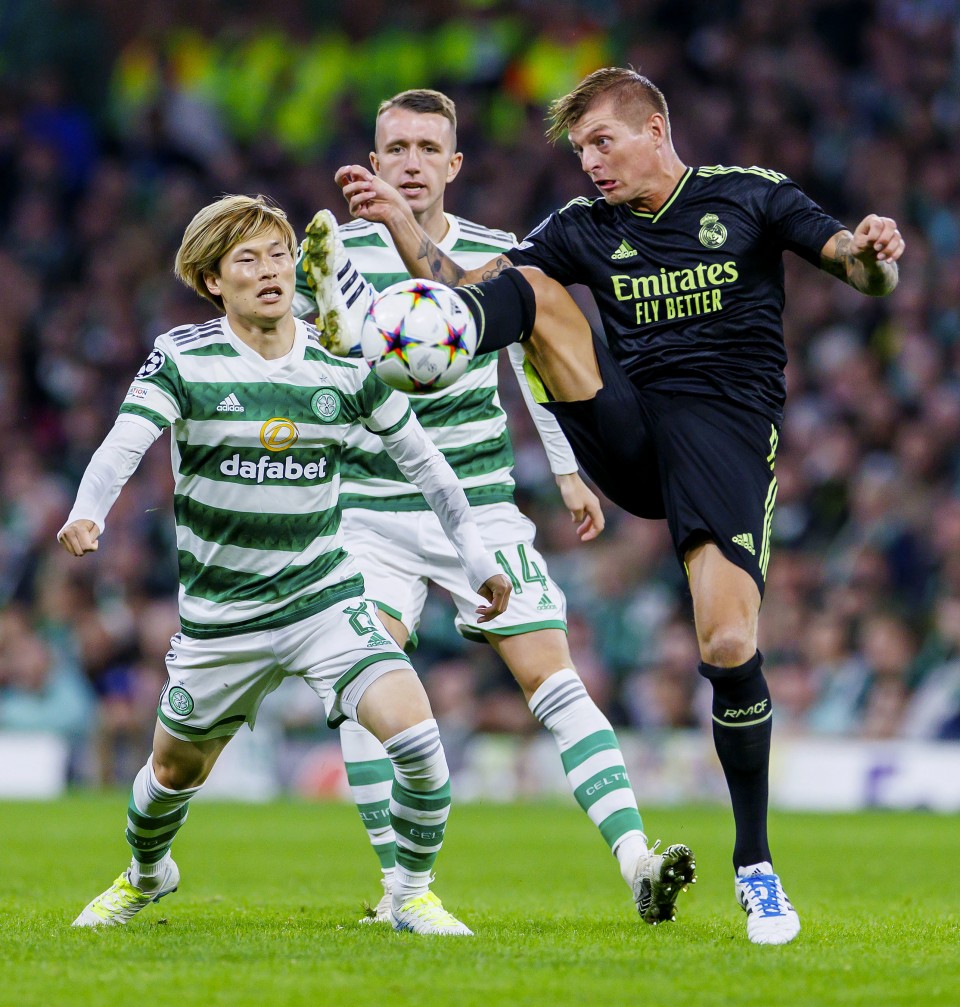 Celtic's Kyogo Furuhashi (L) and Real Madrid's Toni Kroos (R) vie for the ball during the second half of a Champions League group-stage match in Glasgow, Scotland, on Sept. 6, 2022. (Kyodo)

But it was the lack of end product for Japan that ultimately cost him a place in the World Cup squad, with an unconvinced Moriyasu using the goal poacher sparingly throughout the Asian qualifiers.

Despite being a Tokyo Olympian, the chance of Hatate making the final list was slim after only making his senior debut in March in a final qualifying dead-rubber against Vietnam. He was taken off after the first half playing in an experimental-looking side.

The all-round midfielder's impressive outings this season, including in the Champions League, were not enough to force his way into the manager's thoughts.

"I feel it's been a difficult selection even now, after making the announcement," Moriyasu said. "We'll take every player's spirit to Qatar and give all we have there."