Senior diplomats of Japan, the United States and South Korea agreed Wednesday to strengthen deterrence in reining in the North Korean military threat amid fears that Pyongyang could carry out its seventh nuclear test soon.

Vice Foreign Minister Takeo Mori said at a joint press conference after a trilateral meeting in Tokyo that the three countries will never tolerate the nuclear blackmail employed by Russia in its war against Ukraine. 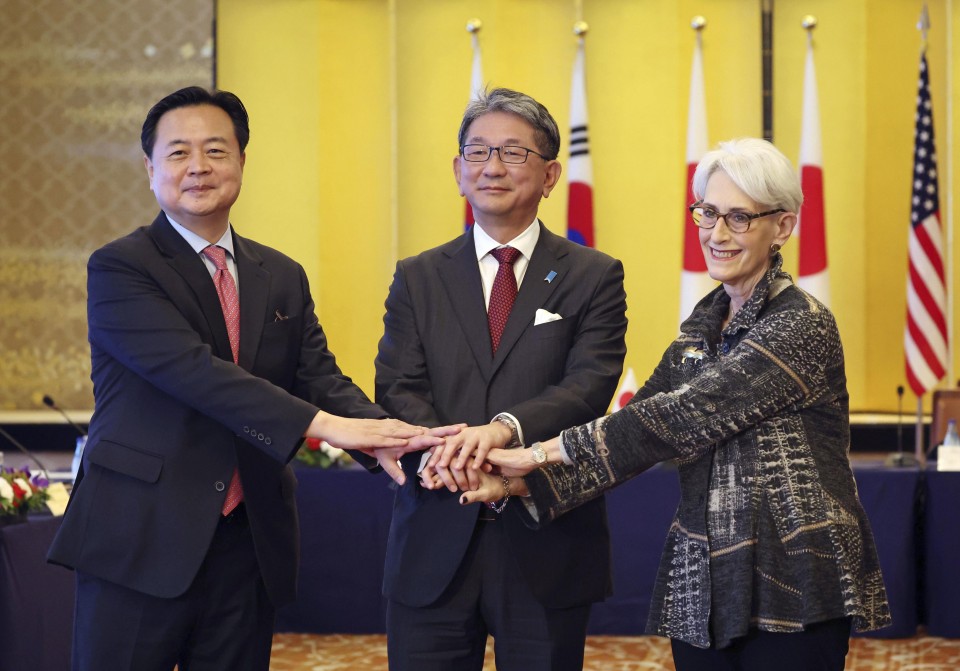 The gathering was held after a series of ballistic missile launches by North Korea, including one early this month that flew over the Japanese archipelago for the first time in five years, with concern growing that the country could carry out its first nuclear test since September 2017.

On Tuesday, South Korean President Yoon Suk Yeol said during a speech in the National Assembly that North Korea "seems to have completed its preparations" for a nuclear test.

"We shared the view that North Korea's increased nuclear and missile activities are an obvious and serious challenge to the international community," Mori said, adding that the diplomats will work together, including through the U.N. Security Council, toward the nation's complete denuclearization.

Cho said at the news conference that the three nations recognized the necessity of "taking the strongest-ever response" in case Pyongyang conducts its seventh nuclear test.

They agreed that the North's ballistic missile launches with "extremely high frequency" are "grave and imminent threats to the region's peace and stability," sharing the importance of reinforcing the deterrence and response capabilities of Japan-U.S. and U.S.-South Korea alliances, the Japanese Foreign Ministry said.

Following a flurry of recent provocative actions by Pyongyang, Washington and its two East Asian allies, Tokyo and Seoul, are boosting their defense cooperation. They conducted their first joint anti-submarine exercise in five years in late September, as well as joint drills to detect ballistic missiles early this month.

The three officials also strongly condemned Russia's aggression against Ukraine as threatening the foundation of the international order of not only Europe but also Asia, pledging to collaborate in responding to the issue, the ministry said.

They shared "serious concerns" about Moscow's indication of using nuclear weapons in Ukraine and agreed that threatening the use of nuclear arms, let alone the actual use, is "absolutely unacceptable," according to the ministry.

Referring to Russia's "false allegation" that Ukraine could use a "dirty bomb" that would cause radioactive contamination, the diplomats also vowed not to allow further escalations of the situation for whatever reason, the ministry added.

The talks also came as military tensions have heightened across the Taiwan Strait, especially following a visit by U.S. House of Representatives Speaker Nancy Pelosi in August to Taiwan, which Beijing views as a breakaway province to be reunified, by force if necessary.

Sherman said at the press event that U.S. policies regarding Taiwan remain unchanged and stressed maintaining peace across the Taiwan Strait.

The three-way vice foreign ministerial meeting followed one in Seoul in June. Yoon took office in May, succeeding left-leaning Moon Jae In, under whose presidency relations between Seoul and Tokyo deteriorated over wartime labor and territorial issues.