Senior diplomats from Japan and the United States agreed Tuesday to keep working closely together to respond to "various challenges over China," the Japanese government said.

During their meeting in Tokyo, Vice Foreign Minister Takeo Mori and U.S. Deputy Secretary of State Wendy Sherman also pledged to continue to work toward the complete denuclearization of North Korea under U.N. Security Council resolutions, including in a trilateral cooperation framework with South Korea, according to the Foreign Ministry. 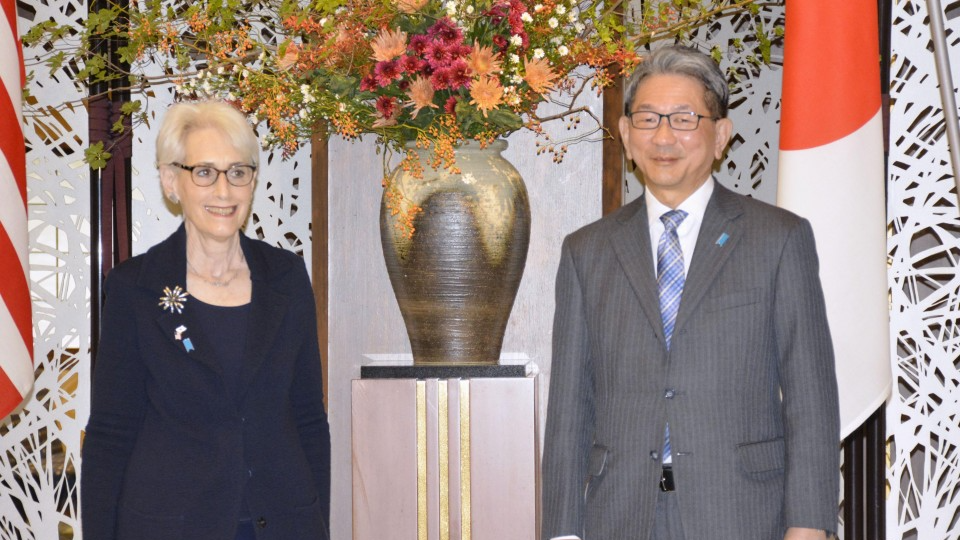 The two diplomats' reference to Beijing apparently reflects wariness about its maritime assertiveness in the East and South China seas, including Chinese vessels' repeated intrusions into Japanese territorial waters near the Japan-controlled, China-claimed Senkaku Islands.

China has also increased military activities near Taiwan, which it sees as a renegade province to be reunified with the mainland, by force if necessary.

Mori and Sherman affirmed the two nations will further strengthen their alliance and promote their vision of a "free and open Indo-Pacific," which is aimed at countering Beijing's growing military and economic clout in the region.

The talks came as Pyongyang has upped the frequency of its ballistic missile tests this year, especially since it resumed missile launches in late September after a hiatus of almost four months apparently caused by a COVID-19 outbreak in the nation.

Speculation has been growing that North Korea could engage in additional provocative actions, including what would be its seventh nuclear test and first since September 2017.

On Russia's invasion of Ukraine, the two diplomats shared the view that Moscow's nuclear blackmail is "a serious threat" to international peace and stability and "absolutely unacceptable" while vowing to maintain severe sanctions on Russia and continue support for Ukraine, the ministry said.

Later in the day, Mori also met with visiting South Korean First Vice Foreign Minister Cho Hyun Dong. They confirmed the two nations will continue to hold close discussions to resolve the issue of compensation for wartime labor during Japan's 1910-1945 colonial era, according to the South Korean Foreign Ministry.

On Wednesday, the three officials are set to hold a trilateral meeting in Tokyo.