The top military officers of Japan, the United States and South Korea have agreed to maintain "effective bilateral and multilateral security cooperation and coordination" to deal with North Korea's missile and nuclear threats.

Gen. Mark Milley, chairman of the Joint Chiefs of Staff, reaffirmed the United States' "ironclad commitment" to defending the two East Asian allies, in a meeting Thursday near Washington with his Japanese and South Korean counterparts, Gen. Koji Yamazaki and Gen. Kim Seung Kyum, according to the U.S. and Japanese governments.

The talks came as North Korea has been launching ballistic missiles at an unprecedented pace since the start of this year, with speculation growing that the nation could soon carry out what would be its seventh nuclear test, and first since September 2017. 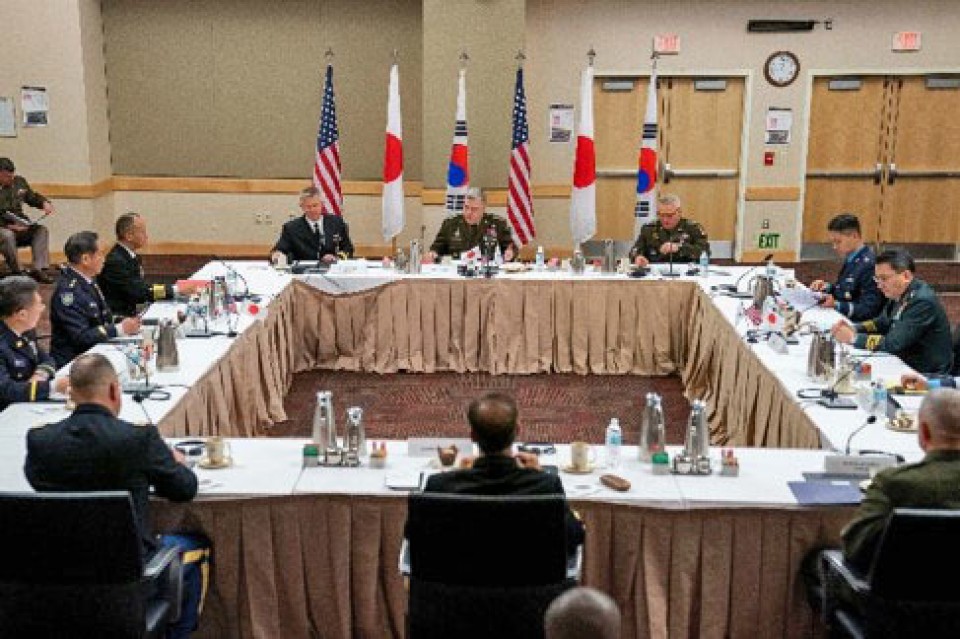 The top military officers of Japan, South Korea and the United States meet at the U.S. Defense Department on Oct. 20, 2022. (Photo courtesy of the Japanese Defense Ministry's Joint Staff Office)(Kyodo)

Following a flurry of missile activity by Pyongyang, the United States, Japan and South Korea are boosting their defense cooperation. They conducted their first joint anti-submarine exercise in five years in late September, as well as joint drills to detect ballistic missiles early this month.

The discussions by the three officers focused on regional security challenges, including North Korea's "recent missile activities and nuclear program developments which destabilize the region," the governments said.

They also agreed that their trilateral alliance is essential to maintaining regional peace and stability, and pledged to pursue a "free and open Indo-Pacific," the vision promoted by Japan and the United States to counter China's military clout in the region.

It was the first gathering by the highest-ranking generals from the three countries since they met in Hawaii in March this year.

Later in the day, Milley reaffirmed in a bilateral meeting with Yamazaki that the United States is committed to the defense of Japan including the Senkaku Islands, his office said.

The Japan-controlled, uninhabited islets in the East China Sea are claimed by China, which calls them Diaoyu.

Japan to expand sanctions on North Korea over missile tests