A local railway line straddling Fukushima and Niigata prefectures, renowned for its breathtaking natural views, fully reopened Saturday, more than 11 years after a 27.6-kilometer section of the track was rendered unusable by torrential rain.

Many gathered to ride or witness the packed trains on the picturesque JR Tadami Line, which has been using replacement bus services between Aizu-Kawaguchi and Tadami stations since three metal bridges that cross the Tadami River were washed away in the July 2011 downpour. 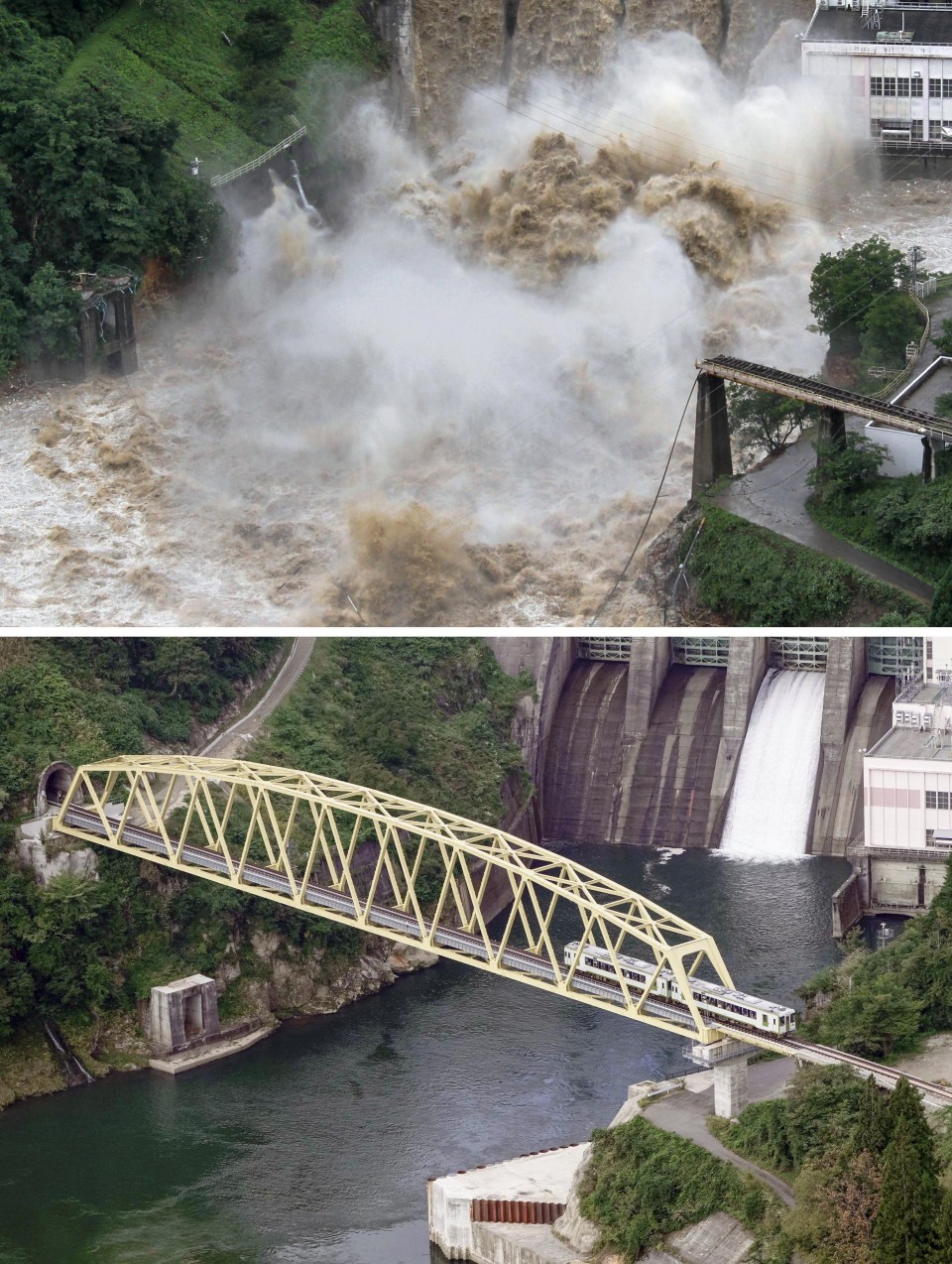 Composite photo taken from a Kyodo News helicopter shows a bridge on the Tadami Line that collapsed (top) in torrential rains on July 30, 2011, and the newly restored bridge (bottom) on the first day of full operations in 11 years in Kaneyama, Fukushima Prefecture, on Oct. 1, 2022. (Kyodo)

The 135.2-kilometer line running from Aizu-Wakamatsu in Fukushima Prefecture and Koide Station in Uonuma, Niigata Prefecture, snakes through mountains and over rivers in rural Japan, offering breathtaking countryside views.

The restoration was achieved in part due to local requests, with JR East initially calling for the continued use of buses.

The roughly 9 billion yen ($62 million) in restoration expenses was partly subsidized by the national government, with JR East and the prefectural and local governments also shouldering costs. While it is hoped that the line's full return will encourage tourism, it comes as concerns mount over how to sustain loss-making local trains.

On the day of the reopening, a packed 7:11 a.m. service from Koide Station to Aizu-Wakamatsu Station managed to travel the entire route, but the early morning train headed in the opposite direction halted after the emergency brake was activated, and the around 210 passengers had to revert to the replacement bus services. 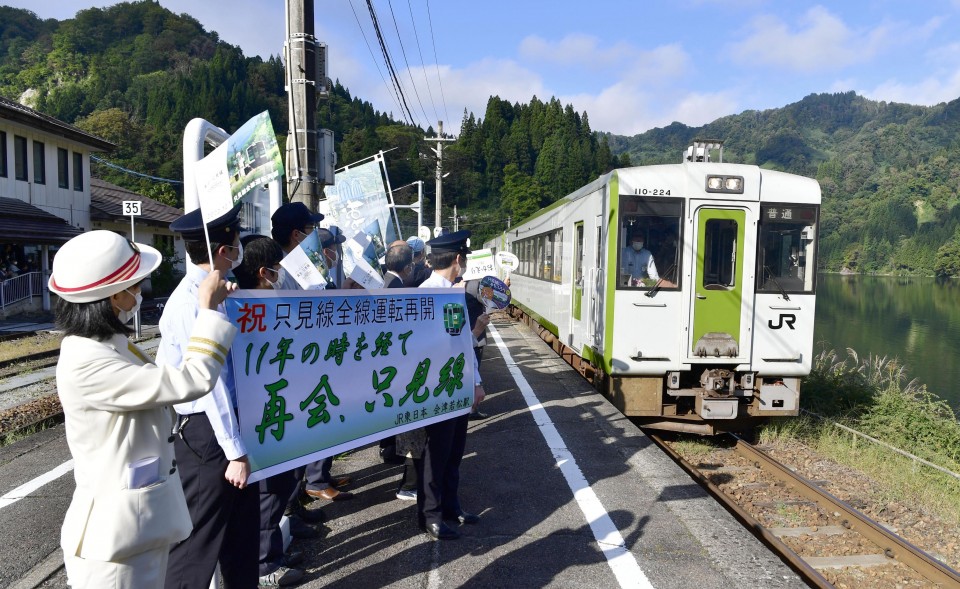 People welcome a Tadami Line train as it pulls into Aizu-Kawaguchi Station on the first day services have been restored to a section of the line after 11 years of disruption, in Kaneyama, Fukushima Prefecture, on Oct. 1, 2022. (Kyodo)

The service was stopped for about four hours, prompting an apology from East Japan Railway Co. President Yuji Fukasawa, who attended an event to commemorate the reopening in the town of Tadami.

Despite the disruption, the railway's revival was a day of celebration for many. At Aizu-Shiozawa Station, one of the stations along the newly restored section, postal worker Teiko Kanke said, "When I think that it's finally moving again, I feel so full of emotion." 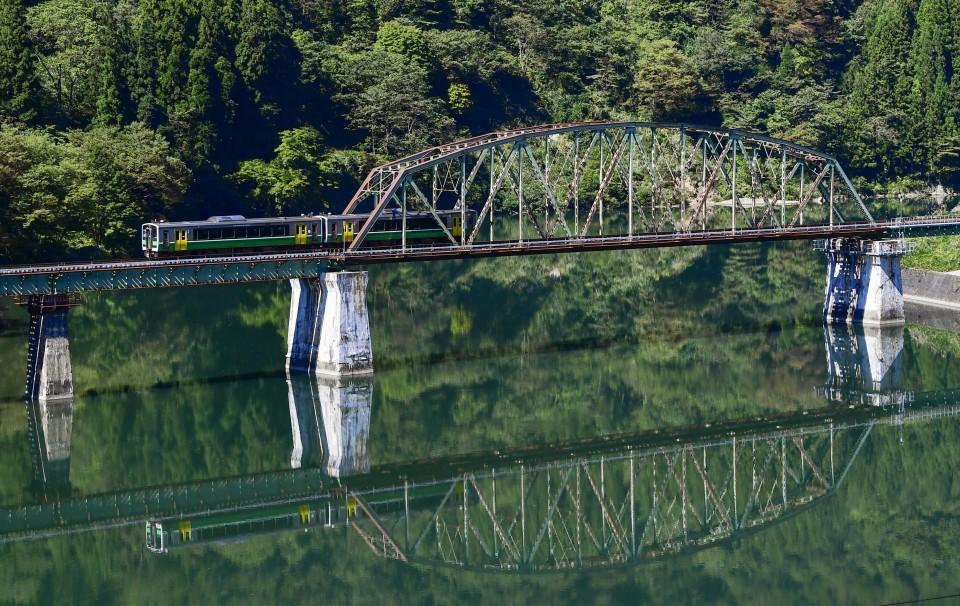 A Tadami Line train crosses one of the restored bridges along the service, on the first day in 11 years that the entire line has been operational, in Kaneyama, Fukushima Prefecture, on Oct. 1, 2022. (Kyodo)

Shinichi Nagai, visiting from Sapporo in the northernmost prefecture of Hokkaido, was among the passengers on a commemorative train that arrived about two hours late in Tadami Station from Aizu-Wakamatsu. His enthusiasm intact, he said, "The dynamic Tadami River is really pretty, and it was so nice to see local people waving to the train."

But some locals were less excited about the return of the train, which runs only three end-to-end services on each side of the line per day, with some telling Kyodo News they don't really use it, and that cars are more convenient.