Kyushu Railway Co., which serves the southwestern Japan region, said Monday it will temporarily suspend 120 limited express train services due to staff shortages caused by the spread of coronavirus infections among onboard crew.

From Wednesday through Aug. 5, a total of 100 Sonic limited express trains running from Hakata to Oita stations, and 20 Kamome trains that run from Hakata to Nagasaki will be suspended, the operator said. 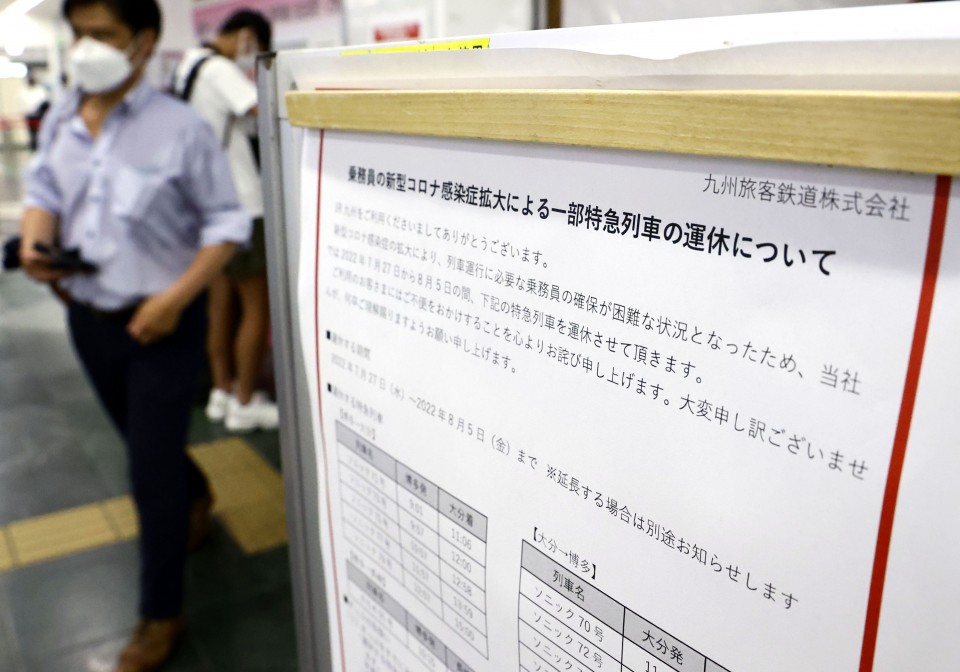 Photo taken on July 25, 2022 at Hakata Station in the southwestern Japan city of Fukuoka shows an advisory by Kyushu Railway Co. explaining that some limited express are to be suspended.(Kyodo)

According to the company commonly known as JR Kyushu, a total of 38 crew including train drivers and conductors have been infected with COVID-19 or identified as close contacts as of Monday.

While the operator had been rearranging staff holidays and procuring employees from other operations with crew experience to deal with the shortage, the rapid spread of the virus has forced them to decide on the suspension, JR Kyushu said.

"The number of crew postponing their time off has increased, and it has become necessary to temporarily rearrange the work system," a JR Kyushu official said.

No other services have been affected, and customers with tickets for the suspended limited express trains will be eligible for refunds without a cancellation fee, the operator said.

Japan's daily COVID-19 cases have climbed to a new record of over 200,000 cases on Friday, driven by the highly transmissible Omicron subvariant known as BA.5.