The Bank of Japan on Thursday maintained its ultralow rate policy to support the pandemic-hit economy as widely expected, sticking to a dovish stance despite the yen's sharp decline in a global policy-tightening wave triggered by surging inflation.

After the policy decision, the yen breached the psychologically important 145 level versus the U.S. dollar, and Governor Haruhiko Kuroda ruled out rate hikes in the near future. To stop the yen's relentless slide, Japan intervened in the currency market by buying the yen for dollars for the first time since 1998.

The effect of such a unilateral act is questionable, market analysts say, as the recent rapid yen depreciation toward a 24-year low reflects the widening gap between Japanese and U.S. interest rates.

Underscoring its dovish tilt, the BOJ decided at a two-day policy meeting to keep short-term interest rates at minus 0.1 percent and continue guiding 10-year Japanese government bond yields to around zero percent. It also retained a pledge to take further easing steps without hesitation should such a need arise. 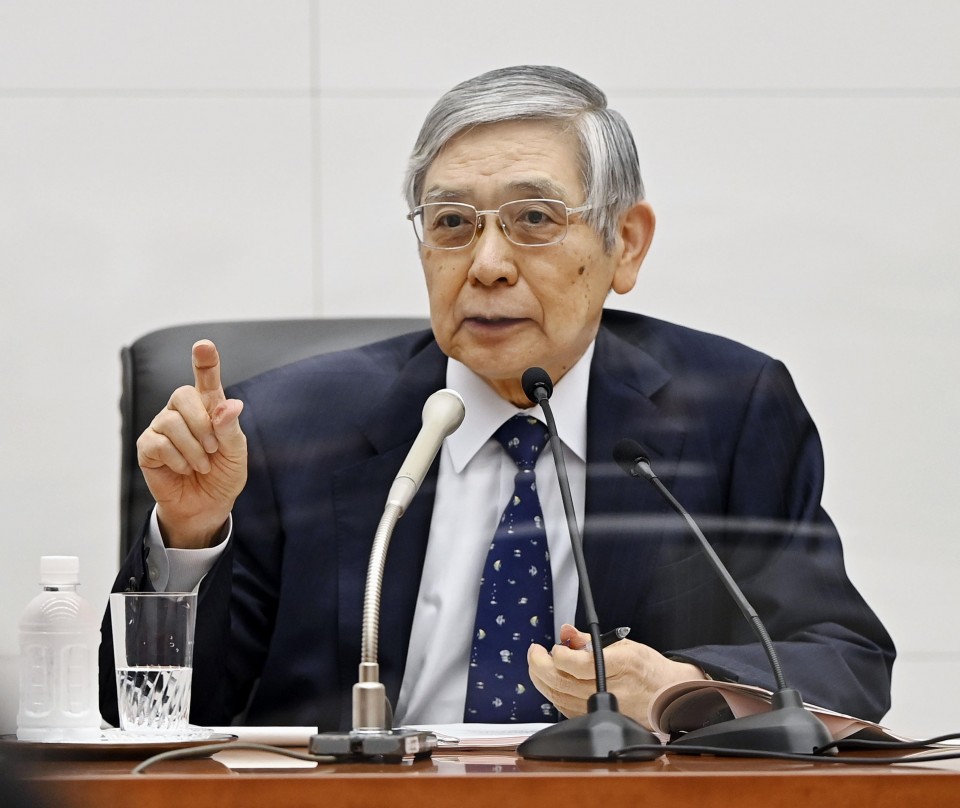 Bank of Japan Governor Haruhiko Kuroda attends a press conference at the BOJ's headquarters in Tokyo on Sept. 22, 2022, after the central bank decided to maintain its ultralow rate policy despite the yen's sharp slide in a global policy-tightening wave triggered by surging inflation.(Pool photo) (Kyodo) ==Kyodo

The Federal Reserve raised its benchmark rates by 0.75 percentage point on Wednesday, while key central banks in Europe have also been tightening their policies.

As the Swiss National Bank decided Thursday to end its negative rate policy, only the BOJ has remained in a phase of unconventional monetary stimulus among the world's leading central banks.

"There is no change in our stance of maintaining monetary easing. We do not plan to raise interest rates for the time being," Kuroda told a press conference after the meeting.

It is "natural" that Japan's monetary policy differs from those of the United States and Europe where the inflation rate is much higher, Kuroda said. "Just because it ends in another country in comparison, it doesn't mean that our negative rate should also end."

The yen's slump has created headaches for resource-scarce Japan by inflating import costs, though it also boosts the overseas profits of exporters in yen terms.

The possibility of yen-buying, dollar-selling intervention by Japanese authorities had kept currency market participants on alert after the BOJ made inquiries to dealers about dollar-yen trading in a "rate check" seen as a precursor to actual intervention. The central bank carries out intervention for the government.

In Thursday's press conference held before the intervention, Kuroda explained that the current policy is appropriate because consumer inflation, which jumped 2.8 percent in August, is almost certain to slow and undershoot its 2 percent target in the next fiscal year from April. The recent cost-push inflation is unfavorable, he added.

The BOJ's statement released after the meeting states it "expects short- and long-term policy interest rates to remain at their present levels or lower."

Kuroda shot down market speculation that the BOJ would change its policy guidance in the near future, saying that it will not happen for the time being.

The yen rose sharply after Japan's intervention and briefly traded in the 140 zone versus the dollar. Before the rare move, Kuroda said the recent rapid weakening of the yen was raising uncertainty for Japanese companies and "negative" for the economy.

Mari Iwashita, chief market economist at Daiwa Securities Co., said Thursday's decision reinforced the view that the BOJ is unlikely to budge until Kuroda's term ends next year with the government continuing to back its monetary policy stance.

"The yen's levels are not a concern for the BOJ or Mr. Kuroda. Going against the yen's depreciation is equal to denying its policy over the years to boost the economy with the help of yen weakness," Iwashita said. "The Finance Ministry and the BOJ may be at different alert levels."

The BOJ will continue to buy exchange-traded funds with an upper purchase limit of 12 trillion yen ($83 billion) annually. The current pandemic-relief program to support financially struggling smaller firms will be extended beyond the end of September before its phase-out, according to the statement.

The BOJ faces the formidable task of justifying its dovish stance. Its ultralow rate policy is intended to support the still slow economic recovery from the COVID-19 fallout and to achieve inflation in a stable and sustainable fashion, accompanied by robust wage growth.

But the policy also risks a further slide in the yen, leading to higher prices of imported energy, food and other raw materials. The country's headline inflation rate has stayed above the 2 percent target for five months in a row and economists expect it to top 3 percent by the end of this year.

Japan's economy has "picked up" with progress in the resumption of economic activity and will likely continue its recovery as the impact of COVID-19 and supply constraints wane, the BOJ said. It warned of downside risks from surging commodity prices, saying that "extremely high uncertainties" remain over the outlook.

Overseas economies have been recovering moderately, but slowdowns have been observed in advanced economies, the post-meeting statement said amid growing market concerns that aggressive rate hikes will hamper growth.