Bank of Japan Governor Haruhiko Kuroda said Friday that recent rapid movements of the yen are "unfavorable" for Japanese companies, adding to a chorus of warnings from monetary authorities about high volatility following the currency's slump to a 24-year low against the U.S. dollar.

Kuroda made the remarks after meeting with Prime Minister Fumio Kishida at his office to discuss recent economic and financial developments. The BOJ chief told reporters afterward that he had received "no requests" from the prime minister.

"When we see (the dollar) fluctuating by 2 yen or 3 yen a day, we say such moves are rapid," Kuroda told reporters. "Rapid fluctuations in foreign exchange rates are unfavorable because they make business management unstable and raise uncertainty over the outlook," he said. 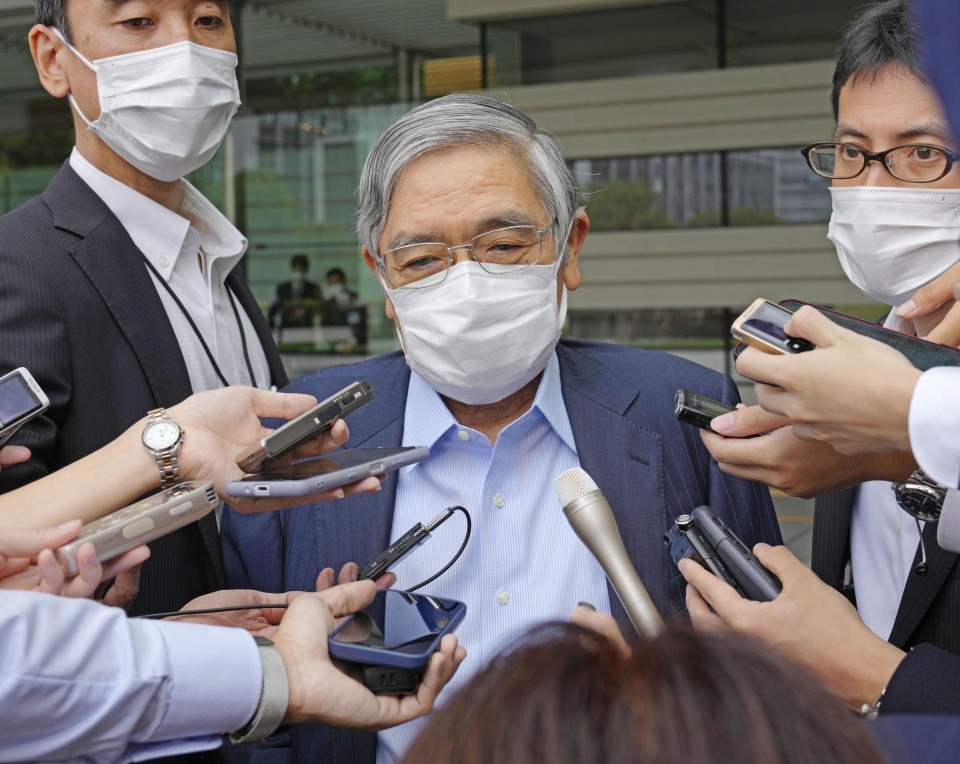 Bank of Japan Governor Haruhiko Kuroda (C) meets the press following his meeting with Prime Minister Fumio Kishida at his office in Tokyo on Sept. 9, 2022, in the wake of the yen's slide to the upper 144 range against the euro, its lowest level in more than seven years. (Kyodo) ==Kyodo

The divergence of the BOJ's monetary policy stance from that of its counterparts such as the U.S. Federal Reserve has been causing yen weakness because the Japanese central bank is in no hurry to raise interest rates.

The yen has also fallen against the euro to the lowest level in more than seven years after the European Central Bank raised its key interest rate by an unprecedented 0.75 percentage point Thursday.

A weak yen is seen as a plus for exporters but its negative side in terms of higher import costs has grabbed more attention at a time when surging energy and food prices, blamed on Russia's war in Ukraine, are dealing a blow to the resource-poor nation.

"We will be carefully monitoring developments," Kuroda said.

The yen, which traded in the upper 143 zone versus the dollar in the early morning, strengthened immediately after the meeting held around noon and bounced back to the lower 142 zone by 5 p.m.

The yen drew further buying later and hit the upper 141 level, after having hit a 24-year low at almost 145 earlier this week.

"We are extremely concerned about rapid fluctuations, which are unfavorable," Suzuki told a press conference, adding, "I've been saying that we are ready to take necessary steps without excluding any options."

Verbal warnings by Japanese monetary authorities against "rapid, one-sided" movements in the currency market have not led to a respite from yen selling.

The Federal Reserve is expected to go ahead with another rate hike at its policy meeting later this month to curb soaring inflation.

A relatively modest pickup in inflation in Japan has put the BOJ on the opposite end of the monetary policy spectrum. Kuroda has taken the view that monetary easing is necessary to support the economy in the midst of its recovery from the COVID-19 fallout, ruling out a rate hike in the near-term.