Despite stepped-up warnings by Japanese authorities, the yen looks on course to lose more of its value to the U.S. dollar, as market players are unfazed by the dangled threat of intervention in foreign exchange markets.

Even if such an intervention becomes a reality to arrest the yen's decline, the chances are that it will be a drop in the ocean and do little to reverse the trend of a strong dollar, unless the Bank of Japan changes its dovish stance -- an unlikely scenario, market analysts say.

The yen has already broken past barriers seen as psychologically important for market participants and defense lines for Japanese authorities, including BOJ Governor Haruhiko Kuroda.

After what Japanese government officials describe as "rapid, one-sided" moves, the yen already at its lowest level in 24 years, could fall toward 148 before the end of the year, according to analysts.

Market players say the recent fast-paced selling of the yen may be somewhat excessive, but recent moves reflect economic fundamentals, -- a key factor for Japanese authorities.

As the U.S. Federal Reserve is keen on continuing rate hikes to tame inflation and the BOJ is unlikely to budge for a while, a stronger dollar against the yen should persist, they added.

"A sense of vigilance has surely heightened among Japanese authorities. But the effect of currency intervention should only be temporary at best and it will be difficult to change the broad trend," said Masafumi Yamamoto, chief currency strategist at Mizuho Securities Co.

"In that sense, the thinking is that it's better not to do anything ineffective," Yamamoto said.

The prospect of the yen at its lowest levels since 1998 is already creating a headache for Prime Minister Fumio Kishida. His government is scrambling to ease the pain on price-sensitive households from inflation accelerating at a faster pace than the BOJ's target of 2 percent, albeit temporarily. A weak yen inflates import costs for resource-poor Japan.

Emerging out of a meeting between the government and the BOJ on Thursday, Japan's top currency diplomat Masato Kanda implied the threat of taking necessary steps with all options on the table. He said recent "excessively volatile" yen moves cannot be explained by economic fundamentals.

The strongest warning to date, however, did not pause yen-selling.

For its part, the BOJ has repeatedly shot down speculation that it will tweak its monetary policy as higher overseas yields have added upward pressure on their Japanese counterparts. Kuroda, a former top Japanese currency diplomat at the Finance Ministry, has ruled out a near-term rate hike.

"The recent weakness of the yen is based on economic fundamentals. Japan has a trade deficit of around 2 trillion yen a month, and yen-selling pressure by Japanese importers is stronger than yen-buying by exporters," said Takuya Kanda, senior researcher at the Gaitame.com Research Institute.

"So it's an economic structure that weakens the yen as it is," he said.

The yen's real effective exchange rate against the dollar, which shows how strong the currency's purchasing power is, already fell to its lowest level in half a century in July. It reflects the diminishing competitiveness of the Japanese economy whose potential growth rate is around zero.

Even if Japan decides to intervene, Kanda of the research institute sees a high hurdle before gaining a nod from the U.S. side and jointly stepping into the market by buying the yen.

"If Japan goes it alone, markets know there is a limit to what it can do. It's like playing the game with your cards open."

Japan's foreign exchange reserves, used for purposes such as currency intervention, fell to $1.29 trillion at the end of August, after hitting a record $1.42 trillion about a year earlier, Finance Ministry data showed. 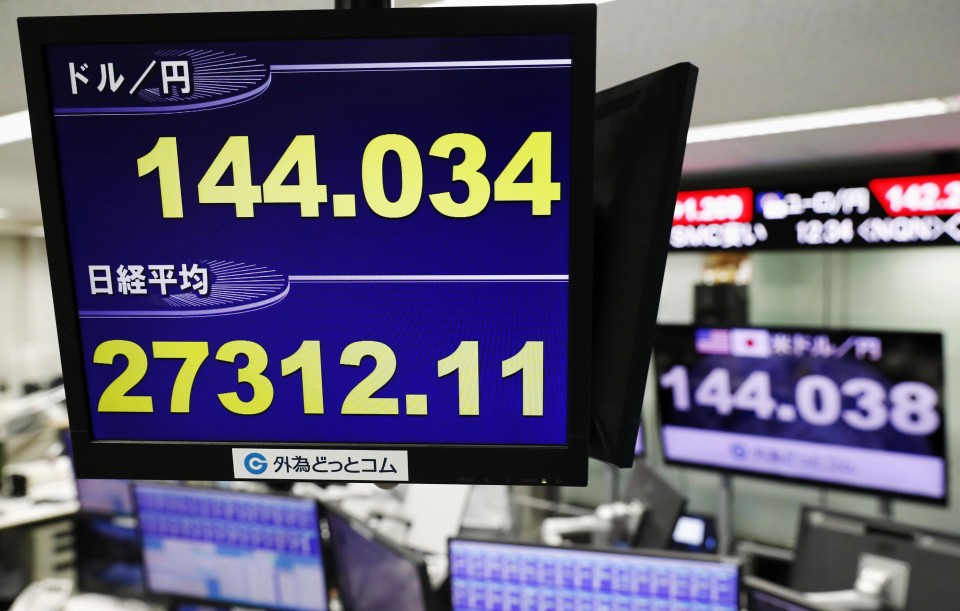 Japan last carried out dollar-selling, yen-buying operations in 1998, in the midst of the Asian financial crisis. The country was struggling in the aftermath of the bursting of the bubble economy, hit by a sell-off in Japan-related assets, including stocks and the yen.

More than two decades later, the situation is different and Japan is not in crisis. The yen has come under intense selling pressure for what analysts view as legitimate reasons.

Japan is set to lag far behind its global peers in tightening its monetary policy. The European Central Bank on Thursday went ahead with another rate hike and financial markets expect a 0.75 percentage point rate increase by the Fed at its policy meeting in late September.

The rapid pace of yen depreciation may not be all positive for exporters, its perceived beneficiary.

Volatility makes it difficult for them to draw up business plans and sell the dollar for the yen at levels they want, market watchers say. The assumed rate for the dollar-yen pair is around 119 yen for Japanese companies in fiscal 2022, according to a BOJ survey.

"Rapid fluctuations either way are not good (for companies) because they can't keep up," said Yuji Saito, head of the foreign exchange department at Credit Agricole Corporate & Investment Bank in Tokyo.

Japan used to fret over a strong yen, which hit 75 per dollar in 2011 in the immediate aftermath of a major earthquake, tsunami and the worst nuclear accident since Chernobyl. Since then, Japanese companies have shifted their production overseas and the export-boosting effect of a weak yen has diminished.

Years of powerful monetary easing under "Abenomics," an economy-boosting program led by the late former Prime Minister Shinzo Abe has weakened the yen, seen as a blessing for exporters, a major driver of economic growth.