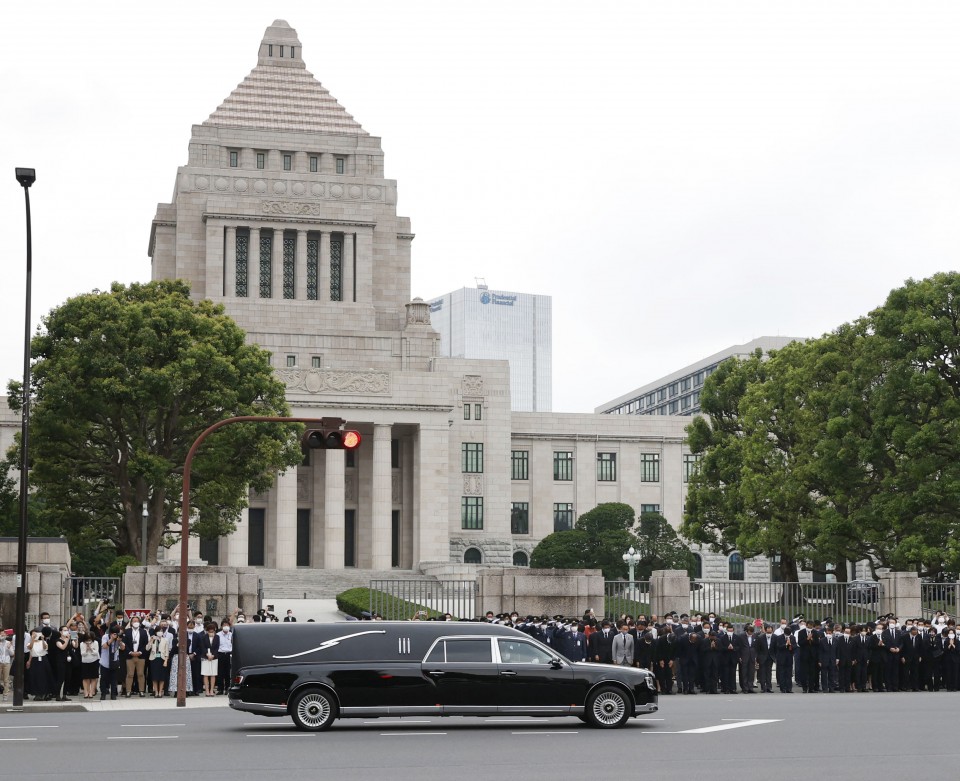 The vehicle carrying the coffin of former Japanese Prime Minister Shinzo Abe passes in front of the parliament building in Tokyo on July 12, 2022, following his funeral. Abe was fatally shot during upper house election campaigning in Nara on July 8. (Kyodo) ==Kyodo

TOKYO - A Tokyo court on Wednesday ordered former executives of Tokyo Electric Power Company Holdings Inc. to pay the utility some 13 trillion yen ($95 billion) in total damages for failing to prevent the 2011 crisis at the Fukushima Daiichi nuclear plant.

The ruling in favor of shareholders who filed the lawsuit in 2012 is the first to find former TEPCO executives liable for compensation after the nuclear plant in northeastern Japan caused one of the worst nuclear disasters in history triggered by a massive earthquake and tsunami in March 2011.

NARA, Japan - The man accused of fatally shooting former Japanese Prime Minister Shinzo Abe has told investigators he learned online about a video message that Abe sent to an event hosted in September by a group affiliated with a religious organization that he resents, investigative sources said Wednesday.

Tetsuya Yamagami, 41, believed the former prime minister was associated with the organization, but the head of the Japan branch of the Family Federation for World Peace and Unification, widely known as the Unification Church, has said Abe was not a member of the church.

TOKYO - Japan's new COVID-19 cases topped 90,000 for the first time since Feb. 17 on Wednesday, as the country braces for another wave of infections driven this time by the BA.5 subvariant of Omicron, official data showed.

The Tokyo metropolitan government reported 16,878 coronavirus cases, surpassing the 10,000 mark for the second straight day and more than doubling from the level a week earlier.

GENEVA - Japan ranked 116th among 146 countries in the gender gap rankings this year, at the bottom of the East Asia and Pacific group, and the Group of Seven major economies, a Swiss-based think tank said Wednesday.

The report by the World Economic Forum showed women's participation in the political and economic arenas remains particularly low in Japan. The country, however, attained high scores in access to education and health.

TOKYO - Ministers from the Quad group held their first energy meeting Wednesday in Australia to deepen cooperation in next-generation clean energy technologies such as hydrogen and ammonia power generation.

The meeting took place after leaders of the Quad -- Australia, India, Japan and the United States -- agreed in May in Tokyo to step up cooperation in various fields to maintain peace and stability in the Indo-Pacific region.

SEOUL - South Korea's central bank on Wednesday raised its benchmark interest rate by an unprecedented half percentage point amid deepening worries over inflation prompted by higher energy and food prices.

The Bank of Korea decided at a Monetary Policy Board meeting to increase the interest rate from 1.75 percent to 2.25 percent, following smaller rate rises at the last two meetings in April and May. It marked the first time for the bank to hike rates three times in a row.

The president, who was due to resign the same day, boarded a military transport plane with his wife and others and flew to the Maldives in the Indian Ocean, the official said, drawing to a close the lengthy Rajapaksa family rule.

TOKYO - Views held about the influence and contribution made by Shinzo Abe during his lifetime in politics, and especially his more than eight years as prime minister, are strikingly different inside and outside Japan. In some ways this is normal: long-serving prime ministers always tend to create more enemies or critics at home than abroad.

It was exactly the same with Britain's Margaret Thatcher. Yet as with Mrs., later Baroness, Thatcher, with Mr. Abe there is another reason: he was a politician with strong convictions, and as a result was a much more polarizing or controversial figure at home, where people were likelier to agree or disagree with his views, than he was abroad.