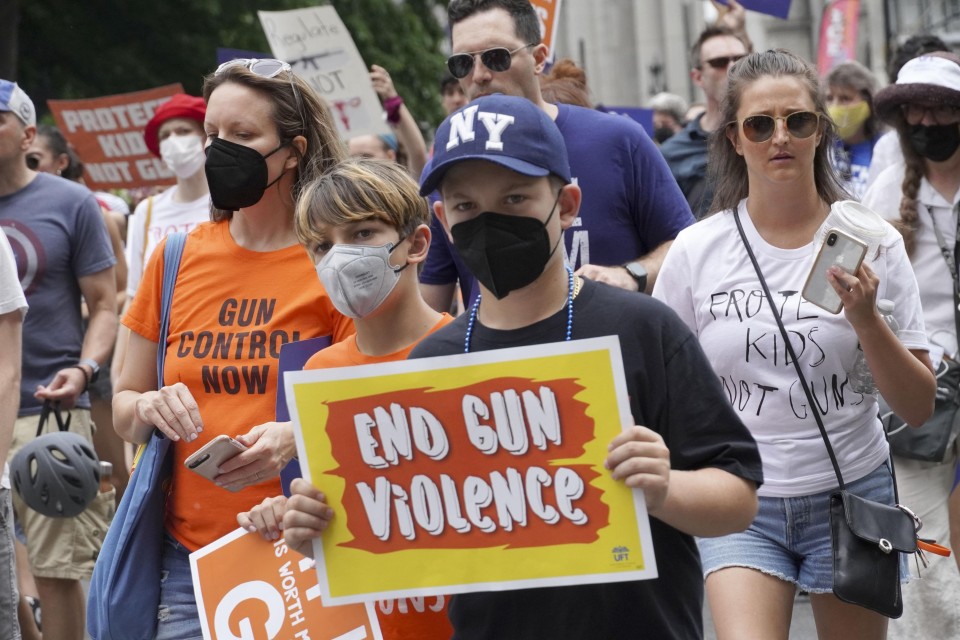 People take part in a rally in New York on June 11, 2022, in support of gun control, following a string of deadly mass shootings, including one in Uvalde, Texas. (Kyodo) ==Kyodo

TOKYO - The proportion of Japanese who consider Prime Minister Fumio Kishida's response to rising prices to be inadequate came to 64.1 percent, while 28.1 percent said it is satisfactory, a Kyodo News survey showed Monday.

In a three-day nationwide telephone poll conducted from Saturday, the approval rating for the Kishida Cabinet slipped back to 56.9 percent -- having previously risen to 61.5 percent last month, its highest level since he took office in October.

TOKYO - The yen slipped Monday to its lowest level against the U.S. dollar in over 23 years, while stocks plunged in Tokyo as high inflation in the United States last month fueled expectations of aggressive monetary tightening by the Federal Reserve.

The Japanese currency briefly accelerated its decline to trade around 135.20, its weakest level since October 1998, on anticipation of a further widening of the interest rate gap between Japan and the United States.

TOKYO - A bill to introduce prison terms as part of tougher penalties for online insults was passed Monday at an upper house plenary session, marking a major step toward tackling cyberbullying in Japan.

TOKYO - Foreign Minister Yoshimasa Hayashi is planning to visit the United States from late July and hold a meeting with his counterparts from a coalition of non-nuclear weapons states in New York, sources familiar with the plan said Monday.

The ministerial gathering of the 12-member Non-Proliferation and Disarmament Initiative is envisaged as Japan hopes to build the momentum for a successful conclusion of the Nuclear Non-Proliferation Treaty review conference to be held in August.

TOKYO - North Korea now has 20 nuclear warheads at most, a leading international security think tank said Monday, at a time when concerns are growing in the Asia-Pacific region that Pyongyang could conduct a nuclear test anytime soon.

The Stockholm International Peace Research Institute gave the estimates for this year for "the number of actual assembled warheads North Korea possesses." Figures released in previous years referred to the number of warheads that it could build with the amount of fissile material it has produced.

SYDNEY - China's ambassador to Australia says the relationship between China and Australia is "at a new juncture," in an optimistic assessment of the two nations' recently strained relations following a change of government in Australia.

The ambassador, Xiao Qian, said a new chapter for China-Australia relations may begin, in a speech to the Australia China Friendship Society in Western Australia on Saturday. The speech was published on the embassy's website on Monday.

SEOUL - South Korea's defense chief has said his country is willing to "normalize" security cooperation with Japan, amid signs of a thaw in bilateral ties frayed over wartime issues.

"We are ready to engage in serious dialogue with Japan," South Korean Defense Minister Lee Jong Sup said in a speech Sunday at the annual Asia Security Summit in Singapore, with his Japanese counterpart Nobuo Kishi also in attendance.

TOKYO - Japan's annual defense budget needs to be nearly doubled from the current amount to 10 trillion yen ($74 billion), the ruling Liberal Democratic Party's policy chief has said, calling for increased spending in the area of space and cybersecurity.