South Korea's defense chief has said his country is willing to "normalize" security cooperation with Japan, amid signs of a thaw in bilateral ties frayed over wartime issues.

"We are ready to engage in serious dialogue with Japan," South Korean Defense Minister Lee Jong Sup said in a speech Sunday at the annual Asia Security Summit in Singapore, with his Japanese counterpart Nobuo Kishi also in attendance.

There have been recent signs of improvement in bilateral ties under the new South Korean administration of President Yoon Suk Yeol, who took office in May. 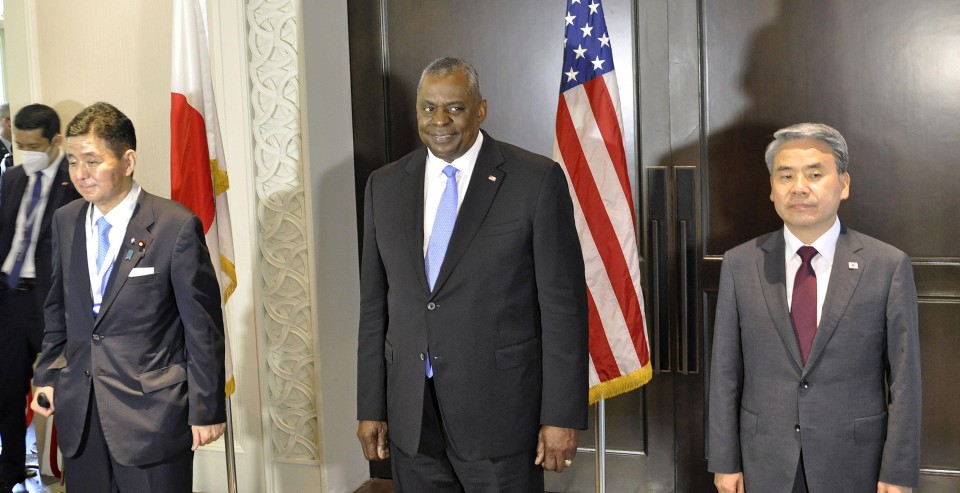 Yoon has called for a future-oriented approach in bilateral relations and vowed to boost trilateral cooperation with Japan and the United States to deal with North Korea's development of nuclear weapons and missiles.

Lee was quoted by Yonhap News Agency and other sources as telling reporters that while he did not hold talks with Kishi during the forum, also known as the Shangri-La Dialogue, they were able to chat informally on three occasions.

He told Kishi that he wants to see their countries' relations "head in a positive direction."

Lee also underscored the importance of creating a good atmosphere, saying the time to hold bilateral talks will "come naturally."

In another positive development for bilateral ties, South Korea's Foreign Minister Park Jin said separately on Sunday before leaving for the United States that he will arrange with Japanese officials a "mutually convenient" time for him to visit Japan.

It would be the first visit to Japan by a South Korean foreign minister since November 2019.

In Washington, Park was quoted by Yonhap as saying there would be an "appropriate time" for a possible meeting between Yoon and Japanese Prime Minister Fumio Kishida.

Yoon will attend the North Atlantic Treaty Organization summit in Spain later this month, a first for a South Korean leader, a person close to his office said, while Japanese government sources said Kishida is considering taking part in the gathering.

South Korea has sounded out Japan about holding an in-person meeting between Yoon and Kishida on the fringes of the summit, the government sources said.

During phone talks in March following Yoon's presidential election, the two agreed to improve bilateral ties and expressed hope to meet in person at an early date.

With concerns growing over the possibility of North Korea conducting a seventh nuclear test, Park said that Pyongyang has now completed its preparations and whether to conduct the test now rests on the "political decision" of the North.

Under the previous administration of South Korean President Moon Jae In, bilateral ties deteriorated over disputes dating back to Japan's 1910-1945 colonial rule of the Korean Peninsula, namely the issue of "comfort women" procured for Japan's wartime military brothels and compensation demands from South Koreans over what they claim was wartime forced labor.

The two sides have also long been at odds over islets controlled by Seoul and claimed by Tokyo, known as Takeshima in Japan and Dokdo in South Korea, as well as Japanese restrictions on semiconductor material exports to South Korea imposed in July 2019.