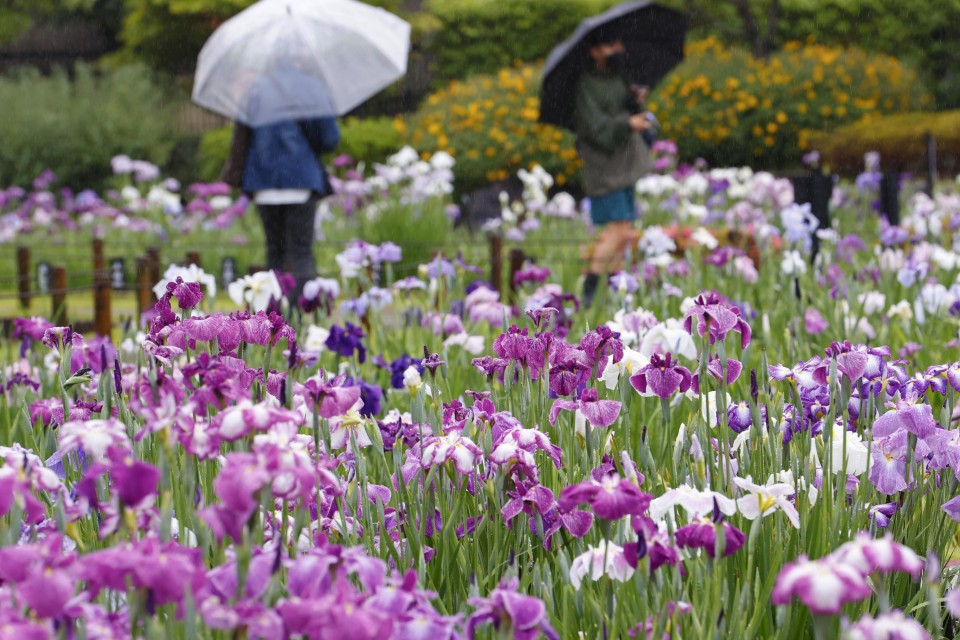 Japanese iris flowers are in full bloom at a garden in Tokyo on June 6, 2022, as the rainy season starts in the Tokyo region the same day. (Kyodo) ==Kyodo

TOKYO - Sony Group Corp. said Tuesday that Nobuyuki Idei, its former chairman and CEO who led the Japanese giant's push into the digital network business, has died of liver failure. He was 84.

In addition to enhancing Sony's presence in the digital and communications fields, he also focused on the entertainment business, such as movies, music and game consoles, laying the foundation for its current operations.

While the guidelines included key policies to establish a positive cycle of growth and distribution of wealth as part of the "new form of capitalism" advocated by Kishida, it also stipulated a plan to increase defense capabilities in the wake of Russia's invasion of Ukraine.

TOKYO - The government said Tuesday it will ask foreign tourists to wear face masks and take out insurance to cover medical expenses in the event they contract COVID-19 as Japan restarts accepting visitors in stages later this week.

The tourism ministry has compiled guidelines for travel agencies and hotels ahead of Friday's resumption of accepting arrivals for the purpose of tourism. Entry will be initially restricted to guided tours from 98 countries and regions presenting the lowest risk of infection, including the United States, Britain, China, South Korea, Indonesia and Thailand.

TOKYO - The Japanese yen fell to a fresh 20-year low against the U.S. dollar Tuesday, briefly touching the 133 line, on expectations that the interest rate gap will widen between Japan and the United States.

The Japanese currency sank to 133.00 against the dollar at one point during Tokyo trading, the lowest level since April 2002, as expectations grew that the U.S. Federal Reserve will continue its aggressive monetary tightening.

Gov't asks companies, households across Japan to save power

TOKYO - The government said Tuesday it will ask companies and households across Japan to save electricity due to a possible power crunch in the summer and winter.

It will be the first time since fiscal 2015 that the government has filed such a request on a nationwide scale. The last such occurrence came in the wake of the 2011 Fukushima nuclear disaster, triggered by a massive earthquake and tsunami, when the government asked that energy be saved from fiscal 2012.

SEOUL - South Korea and the United States conducted a joint air power demonstration involving 20 warplanes Tuesday, in another show of their commitment to a quick response to any provocations by North Korea following its latest missile launch over the weekend.

The demonstration follows a South Korea-U.S. combined live-fire exercise with eight missiles Monday in response to Pyongyang's test-firings of the same number of missiles the previous day.

TOKYO - Japanese musician and composer Ryuichi Sakamoto revealed that he has been battling stage IV cancer in a monthly magazine released Tuesday.

Sakamoto has made public being diagnosed with throat cancer in 2014 and rectal cancer in 2021. But the 70-year-old Oscar- and Grammy-winning pianist had made no announcements about how advanced his cancer was.

KUALA LUMPUR - Malaysia's Islamic affairs minister Idris Ahmad has advised Muslims to avoid a festival of Japan's traditional summer Bon Odori dance as it contains elements from other religions that go against Islam, according to the official news agency Bernama.

"A study conducted by the Malaysian Islamic Development Department (JAKIM) found that the festival does have religious elements, so we advise Muslims not to participate in it," he is quoted as saying on Monday about the upcoming 46th edition of the Bon Odori Festival.