The Group of Seven countries are in final talks seeking a global price cap on Russian oil to pressure Moscow over its war in Ukraine while planning to roll out more steps to support Kyiv, including with revenues from tariffs imposed on Russian products, a U.S. official said Monday.

As the war drives up energy and food prices worldwide, the G-7 leaders, meeting in southern Germany, are grappling with a food crisis that could hit developing nations hard, with Japanese Prime Minister Fumio Kishida pledging $200 million in financial aid.

Ukrainian President Volodymyr Zelenskyy joined part of the day's session online and urged the G-7 leaders to ramp up sanctions on Russia and provide military support, including modern missile defense systems, to Ukraine that has been hit in recent days by Russian missiles. 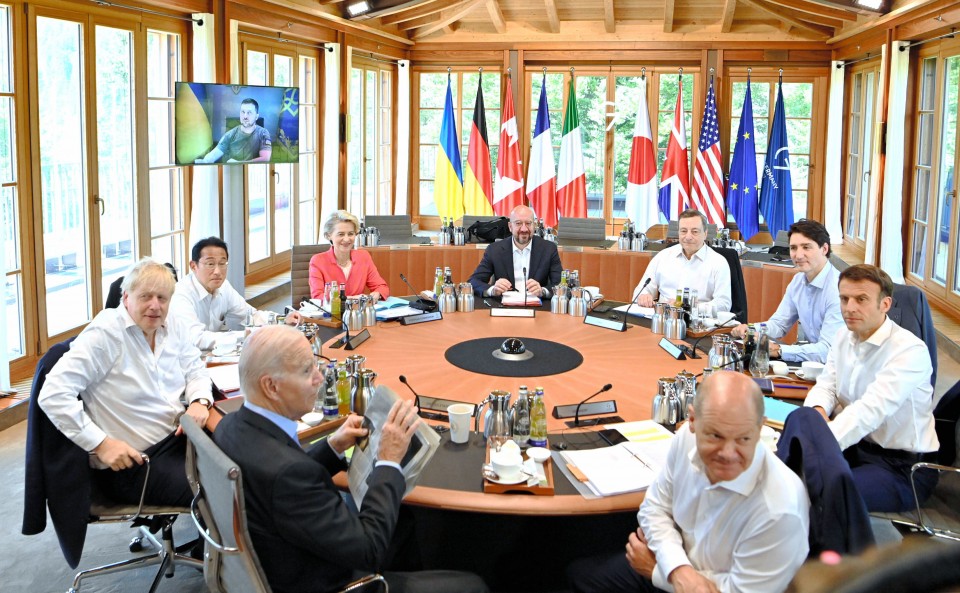 A Group of Seven summit is held at the German mountain resort of Schloss Elmau on June 27, 2022, with Ukrainian President Volodymyr Zelenskyy (on screen) participating online. (Pool photo) (Kyodo) ==Kyodo

"We will continue to provide financial, humanitarian, military and diplomatic support and stand with Ukraine for as long as it takes," the G-7 leaders said in a statement.

According to the U.S. official, the idea of setting a price cap for Russian oil is not only intended to "starve" Russian President Vladimir Putin of his primary source of cash but also to minimize the disruption in global energy markets and provide greater supply to the markets.

The G-7 leaders are likely to task the relevant ministers, including finance ministers, to work with other countries and the private sector to develop a mechanism that would achieve both objectives "simultaneously," the official said.

"We're very close to a place" toward a decision to be reached by the leaders from Britain, Canada, Germany, France, Italy, Japan and the United States, plus the European Union, the official told reporters as he previewed the discussion of the three-day summit in Schloss Elmau to end Tuesday.

Japanese leader Kishida and U.S. President Joe Biden agreed in their talks on the sidelines of the G-7 summit to work closely in hammering out details, including how the envisaged price cap on oil should work, a senior Japanese government official said.

The G-7 nations are on the same page over the importance of setting a price cap to prevent Russia from using oil revenue to fund the war, the Japanese official added.

The G-7 members have strongly condemned Russia's invasion of Ukraine that began in late February, and their sanctions have included a ban or phase-out of Russian oil imports despite the pain it may cause resource-thirsty nations in Europe and Japan. But the rise in energy prices is apparently benefiting Moscow.

"We condemn and will not recognize Russia's continued attempts to redraw borders by force," the leaders said, with a vow to use targeted coordinated sanctions.

They welcomed the granting by the European Council of a candidate status for Ukraine to join the 27-member EU, which Zelenskyy said reflects progress toward European integration.

The leaders are now pushing for a plan to use revenues collected by tariffs on Russian goods to aid Ukraine, with the United States planning a higher tariff rate on more than 570 groups of Russian products worth approximately $2.3 billion, the U.S. official said. 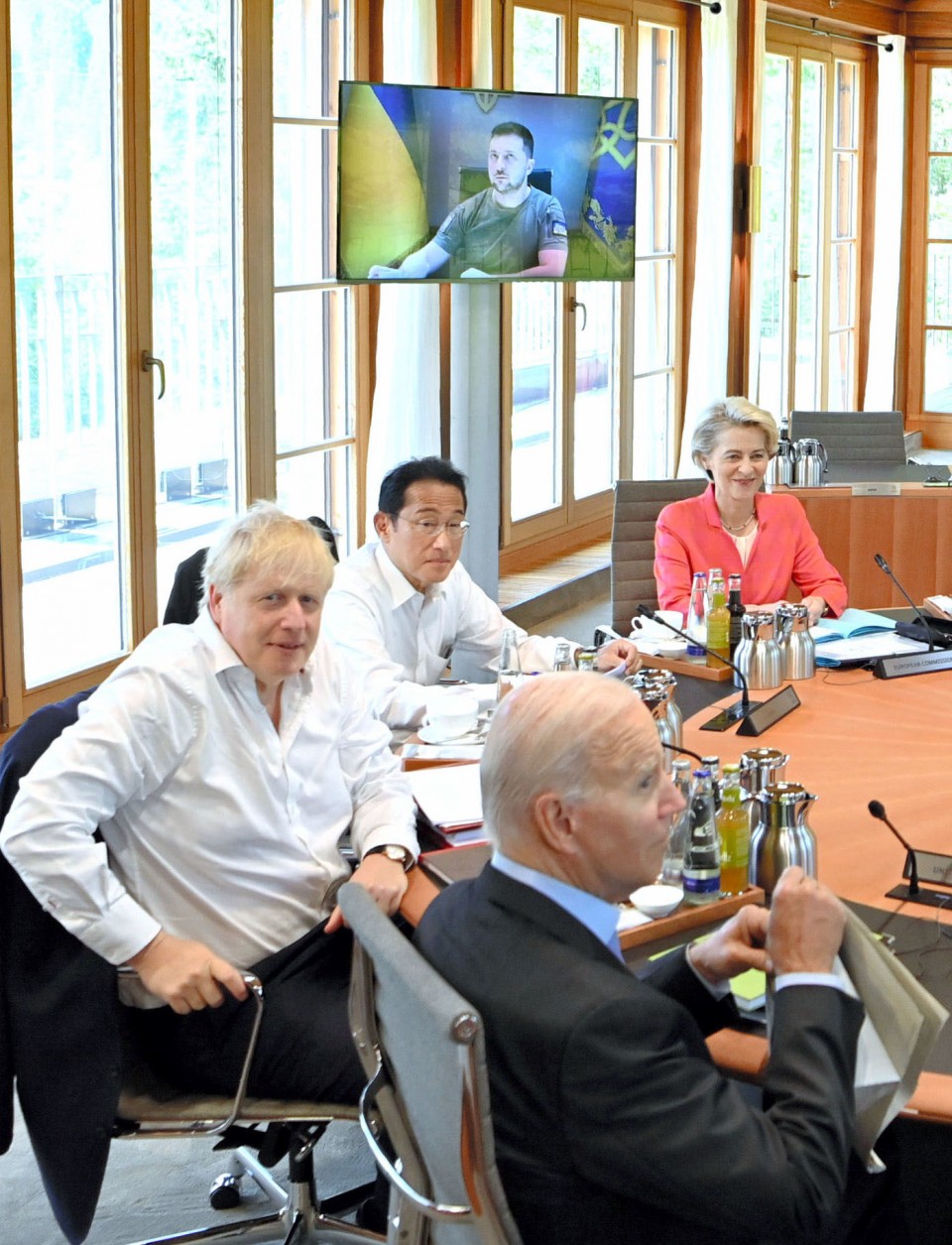 They will decide to impose sanctions on those responsible for human rights abuses, including war crimes, and those involved in Russia's alleged moves to steal grain produced in Ukraine, a country known as a "breadbasket" of Europe and elsewhere.

Concerns over food security are increasing as Russia has destroyed Ukraine's agricultural infrastructure and is blockading Ukrainian ports in the Black Sea, preventing crops such as grain and corn from being shipped worldwide.

The G-7 rejected Russia's insistence that the G-7 sanctions are to blame for the food crisis, which Kishida called a "false claim" by Putin, a Japanese official said.

Some African nations are reliant on grain from Russia and Ukraine and are vulnerable to the unfolding food crisis. For his part, Kishida hopes to underline his country's support ahead of an international conference on African development expected in August in Tunisia, an initiative led by Tokyo.

Japan's amount of Ukraine-related aid will total $1.1 billion, including the $200 million to tackle the food crisis and another $100 million in humanitarian assistance.

The foreign chiefs of the G-7 have said Russia is responsible for the food crisis as the country is weaponizing food supplies and trying to blame sanctions imposed by the West.

While the three-day summit will heavily focus on Moscow's aggression and its broader economic consequences, tackling climate change is another key agenda item.

The war has prompted concerns about some backpedaling on efforts toward decarbonization to secure energy even as the G-7 seeks to cut its dependence on Russian oil and coal.