Group of Seven leaders on Sunday looked set to tighten sanctions on Russia over its war on Ukraine after U.S. President Joe Biden said the group will ban Russian gold imports in a show of unity as the forum navigates the broader consequences of the prolonged war.

In a three-day summit that opened Sunday in the German mountain resort of Schloss Elmau, the leaders also launched a global infrastructure program that will access $600 billion by 2027 to counter China's Belt and Road Initiative.

The G-7 has enforced powerful sanctions on Russia in strong condemnation of its aggression. The impact of the war, now in its fifth month, is increasingly being felt with energy and commodity prices surging and food shortages becoming a pressing issue for some countries. 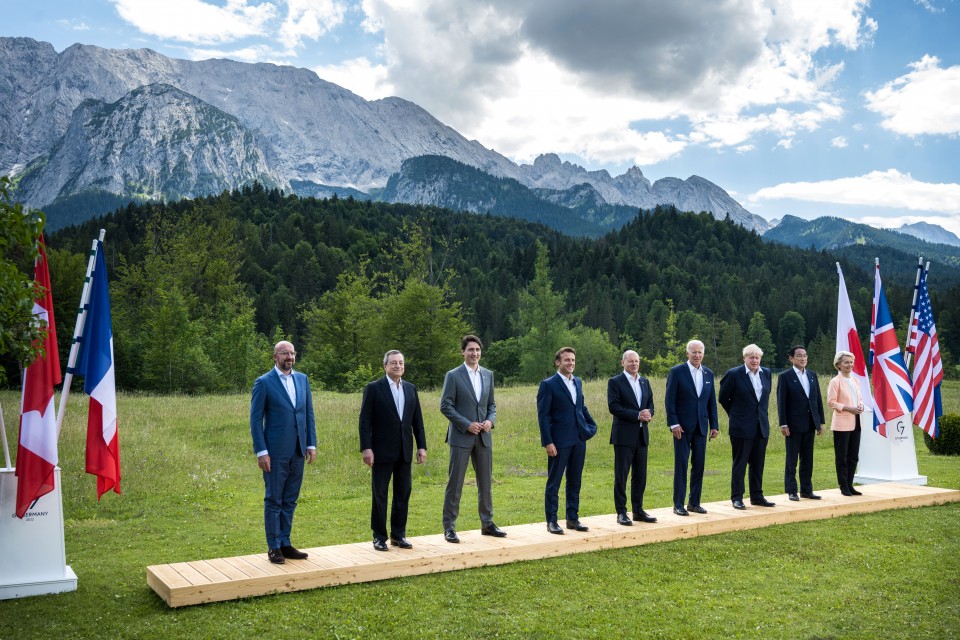 Group of Seven leaders line up for a group photo on the first day of a three-day G-7 summit at Schloss Elmau on June 26, 2022, near Garmisch-Partenkirchen, Germany. (Getty/Kyodo)

"We should not ease our sanctions unless the fundamental issue is resolved -- that is Russia's aggression," Japanese Prime Minister Fumio Kishida told his G-7 peers representing Britain, Canada, France, Germany, Italy, the United States and the European Union.

"G-7 unity is needed, not just in enforcing sanctions but in protecting (people) from rising prices," Kishida was quoted by a senior Japanese government official as saying.

The G-7 has already targeted key Russian energy exports such as crude oil and coal despite the pain it may cause resource-thirsty nations in Europe as well as Japan.

"Together, the G7 will announce that we will ban the import of Russian gold, a major export that rakes in tens of billions of dollars for Russia," Biden said in a tweet. 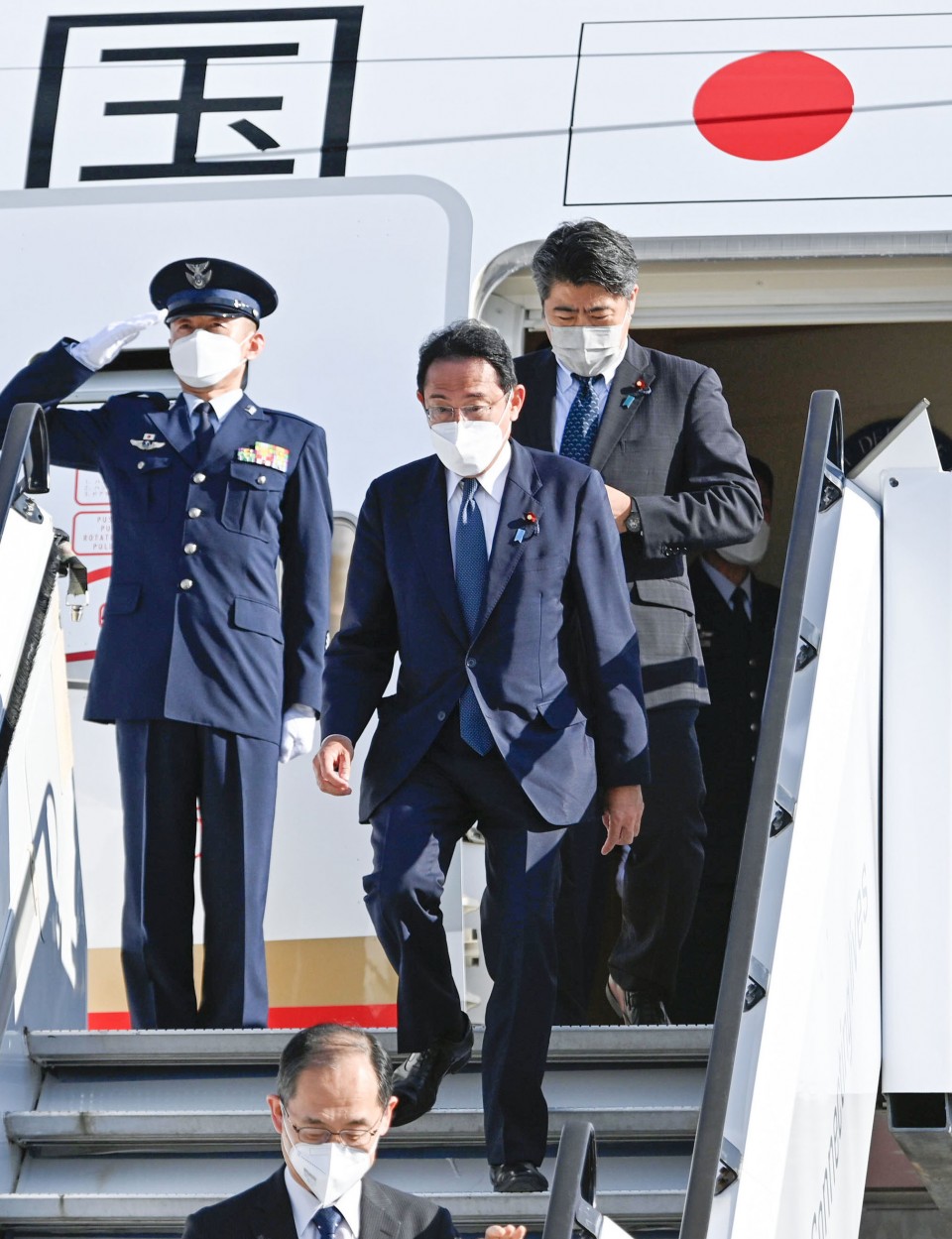 Japanese Prime Minister Fumio Kishida (C) arrives in Munich on June 26, 2022. He will attend a three-day Group of Seven summit starting later in the day in the mountain resort of Schloss Elmau in southern Germany. (Pool photo) (Kyodo) ==Kyodo

Japan will impose additional sanctions on Russia, including an embargo on Russian gold imports, Kishida told the G-7 leaders, according to the Japanese official.

As part of a new tranche of punitive steps, Japan will also ban the provision of accounting, audit and other services to Russia, freeze more assets held by Russian individuals and entities and ban exports to more military-linked organizations.

The potential spillover effects of Russia's aggression in Ukraine -- viewed in the West and Japan as a clear violation of international law and a challenge to the existing global order -- also has the G-7 on alert with an assertive China looming large.

The launch of the new infrastructure initiative for low- and middle-income nations comes as China has been criticized for the Belt and Road Initiative, a scheme that has left some nations beholden to Beijing due to large debts owed.

The "Partnership for Global Infrastructure," as the new initiative is called, is designed to offer a positive alternative to infrastructure models that sell "debt traps," a U.S. official said.

The United States plans to mobilize $200 billion for the initiative over the next five years through grants, federal financing, and leveraging private sector investments, the White House said, with a focus on projects related to clean energy, secure communications technology, health systems and others.

Japan will contribute over $65 billion, Kishida said at a launch event with other G-7 leaders.

Biden said the new program will show the "concrete benefits" of partnering with democracies.

"Because when democracies demonstrate what we can do, all that we have to offer, I have no doubt that we'll win the competition every time," Biden said.

Advocated by Chinese President Xi Jinping since 2013, the Belt and Road Initiative is a multibillion-dollar cross-border infrastructure scheme that critics say is intended to draw countries deeper into Beijing's economic orbit.

Kishida called for G-7 unity in taking a "clear" stance on economic coercion, a phrase apparently directed at China, and stressed the importance of ensuring economic security with other G-7 leaders, according to the Japanese official.

The leaders will spend the next two days exchanging views on energy and food security, climate, and diplomacy -- all in some way impacted by Russia's invasion of Ukraine.

Ramping up pressure on Russia to end its blockade of ports in the Black Sea and allow Ukraine to move exports is of high priority, not only for the war-hit nation but for other parts of the world as it is a major producer of wheat and grains.

German Chancellor Olaf Scholz, who is hosting the three-day gathering, is seeking to discuss a recovery plan for Ukraine, while keeping his focus on the priority issue of climate.

Driven by higher energy and commodity prices, accelerating inflation is a common concern for the G-7 leaders because it threatens to stifle the economic recovery from the coronavirus pandemic.

Their central banks, except for the Bank of Japan, have already begun or plan to raise interest rates to rein in inflation that is now at levels not seen in decades.

The pace of monetary tightening is in focus, and the G-7 finance chiefs have pledged to "appropriately calibrate" it in a clearly communicated manner, a stance their leaders will likely support.

The Organization for Economic Cooperation and Development now expects the global economy to grow around 3 percent this year, down sharply from its earlier forecast of 4.5 percent.

The G-7 leaders have agreed unilateral attempts to change the status quo by force must not be allowed, and Ukraine's sovereignty and territorial integrity should be respected.

Japan is in a unique position as it has a long-unresolved territorial dispute with Russia that has prevented the signing of a post-World War II peace treaty, while it also has experience navigating often difficult ties with China, a major trading partner.

The G-7 aims to address concerns about China's muscle-flexing in the Indo-Pacific region and fears that Russia's behavior may embolden Beijing at a time when tensions remain high with Taiwan, which China aims to reunify with the mainland, by force if necessary.