A vessel carrying divers trained to work at great depths arrived at a port in eastern Hokkaido on Tuesday in preparation for a search inside a tour boat that sank off the Shiretoko Peninsula last month, leaving 14 people dead and 12 missing.

The vessel is slated to leave Abashiri port late Wednesday afternoon, with the divers expected to start searching inside the 19-ton Kazu I, located about 120 meters below the surface, as early as Thursday for any bodies that may be inside the wreck.

Underwater drones have already been used for that purpose but none of the missing were found inside. 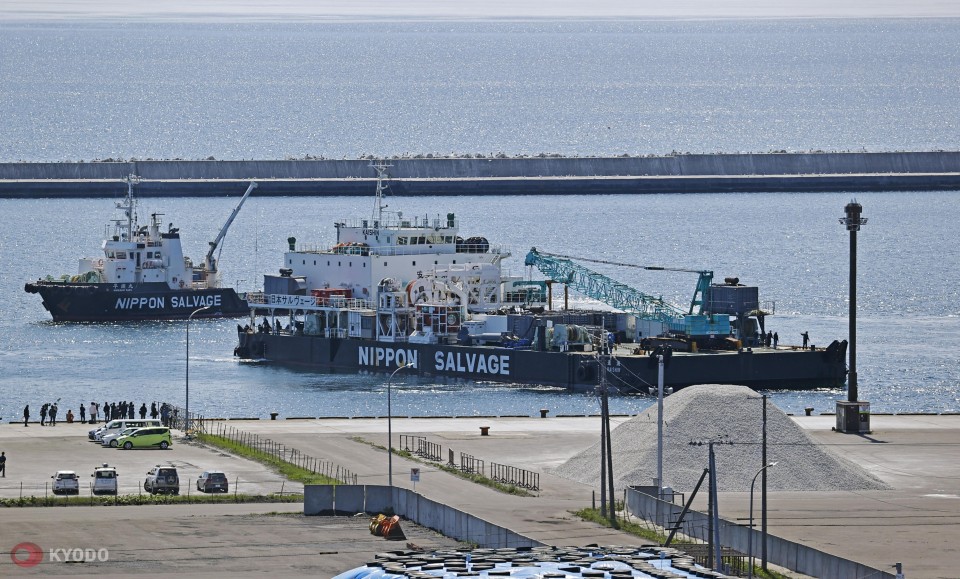 Photo taken on May 17, 2022, shows a workboat (R) at a port in Abashiri, on the northernmost Japanese main island of Hokkaido, ahead of its mission to research a tourist boat that sank off Hokkaido's Shiretoko Peninsula with 26 people aboard on April 23. (Kyodo) ==Kyodo

The divers will attempt a special technique known as saturation diving, in which they absorb a mix of oxygen and helium so they can adjust their bodies to the level of water pressure at the depth they intend to work at.

The transport ministry's Hokkaido bureau conducted an on-site inspection of four tour boat operators in the town of Shari on Tuesday to check their safety practices. The ill-fated tour boat was based there.

The ministry has already conducted a special audit of Shiretoko Yuransen, the boat's operator, including hearings of Seiichi Katsurada, the company's president.

But the president told the ministry that Noriyuki Toyoda, the captain of the boat, was the only assistant manager, ministry officials said Tuesday during a hearing with the Constitutional Democratic Party of Japan.

Japan Coast Guard boats have continued to search for the missing at sea, while police have expanded their search on land to areas south of the peninsula.

The tour boat was carrying 24 passengers and two crew members when it made a distress call and disappeared on April 23 after leaving Utoro port in Shari for sightseeing along the scenic peninsula, despite a forecast for rough weather.