The Japan Coast Guard continued its search Friday of the sea around a Russia-controlled, Japan-claimed island off Hokkaido, two weeks after a tour boat accident that left 14 people dead and 12 missing.

A patrol boat searched the area near Kunashiri Island, one of four islands claimed by both countries, after Moscow permitted the boat to operate based on a bilateral accord on maritime accidents. 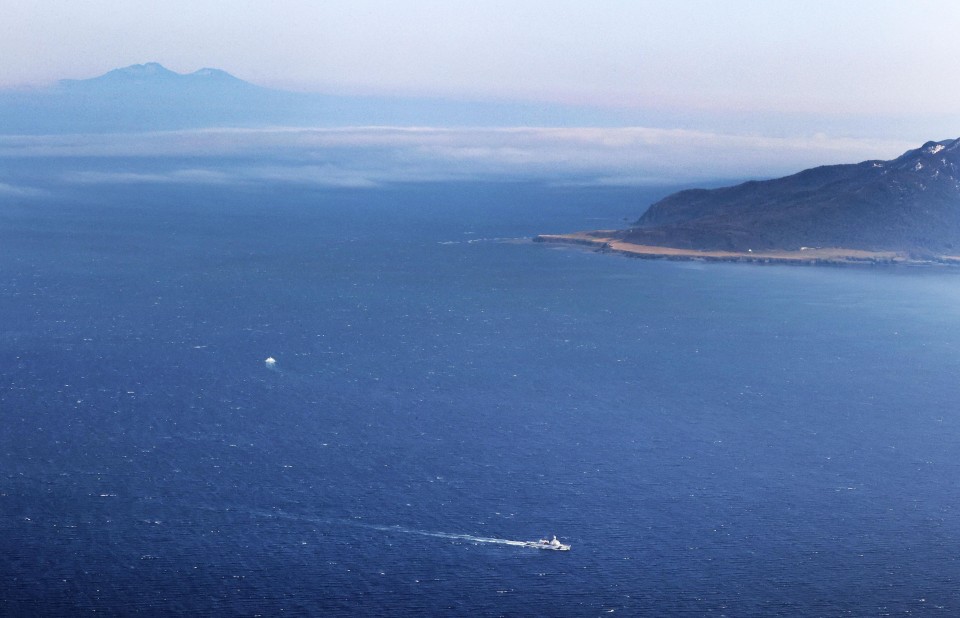 Photo taken May 6, 2022, from a Kyodo News helicopter shows search operations under way off the Shiretoko Peninsula of Hokkaido, northern Japan, for people still missing after a tourist boat sank on April 23. (Kyodo) ==Kyodo

A Tokyo-based company, hired by the coast guard, specializing in saturation diving is scheduled to begin its search of Kazu I, operated by Shiretoko Yuransen, on Sunday. No other bodies have been found since three were discovered on April 28.

Nippon Salvage Co.'s camera-equipped ship will arrive at the Abashiri Port, a gateway to the Shiretoko Peninsula near the accident site, on Saturday afternoon to search using a technique that allows divers to work at great depths for lengthy periods by reducing the need for decompression at the end of every dive.

Divers use a pressurized chamber during the assignment to acclimatize.

Meanwhile, other boats and airplanes searched around the peninsula close to where the sunken tour boat was located on April 29. Local fishermen stopped assisting the search on Thursday.

The 19-ton Kazu I was carrying 24 passengers and two crew members when it went missing on April 23 after leaving port in Shari, Hokkaido, for a cruise along the peninsula despite a bad weather warning.

Police have searched the inside of the boat, which currently sits at a depth of 120 meters off the peninsula, using a camera-equipped device, but there were no signs of those missing.

The search around the Kunashiri Island came after Russia's coast guard agreed to allow Japanese vessels into the area in line with the International Convention on Maritime Search and Rescue. A territorial row over who owns it and three other islands has prevented the two nations from signing a post-World War II peace treaty.

According to the Japanese coast guard, the Russian coast guard told the Japanese side that it had spotted someone in a life jacket drifting at sea on April 27 but could not perform a rescue due to turbulent weather conditions.

The peninsula in the northeast of Hokkaido was designated as a World Natural Heritage site in 2005. It is known as a popular destination for spotting drift ice as well as unique plant life and many rare species of animals such as brown bears.

Earlier in the week, the coast guard searched the operator's office, suspecting the tragedy was caused by gross professional negligence. Shiretoko Yuransen was found to have violated safety rules, according to sources close to an investigation into the incident.

On Friday, the Ministry of Land, Infrastructure, Transport and Tourism said Seiichi Katsurada, the operator's president, will hold a meeting with family members of those aboard to discuss compensation for the accident.