Yokozuna Terunofuji earned his fourth straight victory Thursday to stay one win back of two rank-and-file leaders after five days of the Summer Grand Sumo Tournament.

Terunofuji, who is coming back from injuries in March to his left knee and right heel, beat No. 3 maegashira Hokutofuji (1-4) for the ninth time in 12 career makuuchi bouts.

Sumo's sole yokozuna advanced steadily from the get-go as Hokutofuji gave ground in an effort to avoid surrendering a belt hold. The maegashira, however, simply ran out of room. His arms immobilized, he was forced over backward, doing the splits as he hit the sandy surface.

Bulgarian Aoiyama improved to 5-0, deciding his slapping and thrusting battle by snatching fellow No. 11 Chioyoshoma's outstretched right arm and flinging him to the raised ring and his third defeat. 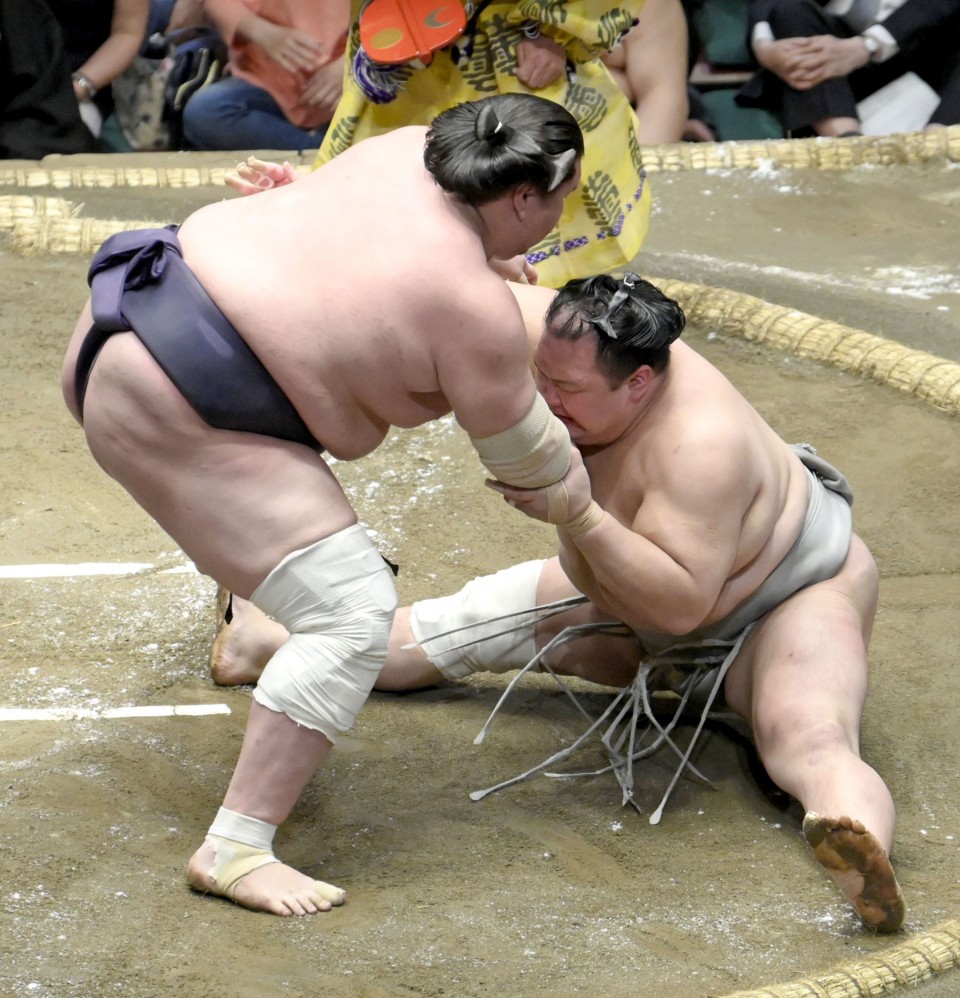 Aoiyama will meet No. 15 Ichiyamamoto (5-0), who pulled down No. 14 Oho (2-3), on Friday to decide the sixth-day leader. Ichiyamamoto has won their only career makuuchi-division match-up.

The other fourth-day leader, No. 5 Tobizaru (4-1) battled and scrapped before being worn down in his loss to No. 8 Shimanoumi (2-3).

Veteran Mongolian No. 3 Tamawashi (4-1) remained one back by beating his nemesis, Mitakeumi (2-3). Tamawashi got the better of the opening charge and shoved the ozeki out, beating him for the fourth time in 31 career bouts.

"This feels awfully good," Tamawashi said. "I tried to take it slowly and not panic, and executed a good thrusting attack."

Ozeki Takakeisho (3-2) started poorly and had to work before exploiting a miss-step by No. 5 Onosho (2-3) to end it.

Tamawashi ran his streak of consecutive appearances since his sumo debut to 1,426 matches, passing Hawaiian-born Takamiyama for fourth all time.

Fellow ozeki Shodai continued his listless form, falling to his fourth loss, easily forced backward out of the ring by No. 4 Endo (2-3).

Daieisho (4-1) also remained one back of the leaders by out-slapping Abi (3-2) on the charge and shoving him backward out of the ring.

Hoshoryu (3-2), the nephew of former Mongolian yokozuna Asashoryu, sidestepped the charge of Wakatakakage (2-3) and drove the sekiwake out from behind.

Cementing his reputation as the wrestler most likely to try anything, Ura (3-2) attempted a rare backward body drop against fellow No. 6 Wakamotoharu (4-1).

Ura spun and backed into his opponent, but failed to seize hold of a belt or an arm he needed. His audacious move having backfired, Ura was driven out from behind.