Hotaka Suyama became the first-ever University of Tokyo wrestler to enter professional sumo when he made his maezumo debut and won his first bout in the on-dohyo initiation to sumo tournaments.

The 24-year-old stepped onto the raised ring at Tokyo's Ryogoku Kokugikan early Tuesday morning along with other recruits and quickly beat 16-year-old Yamadaumi using a "yoritaoshi" frontal crush out technique. 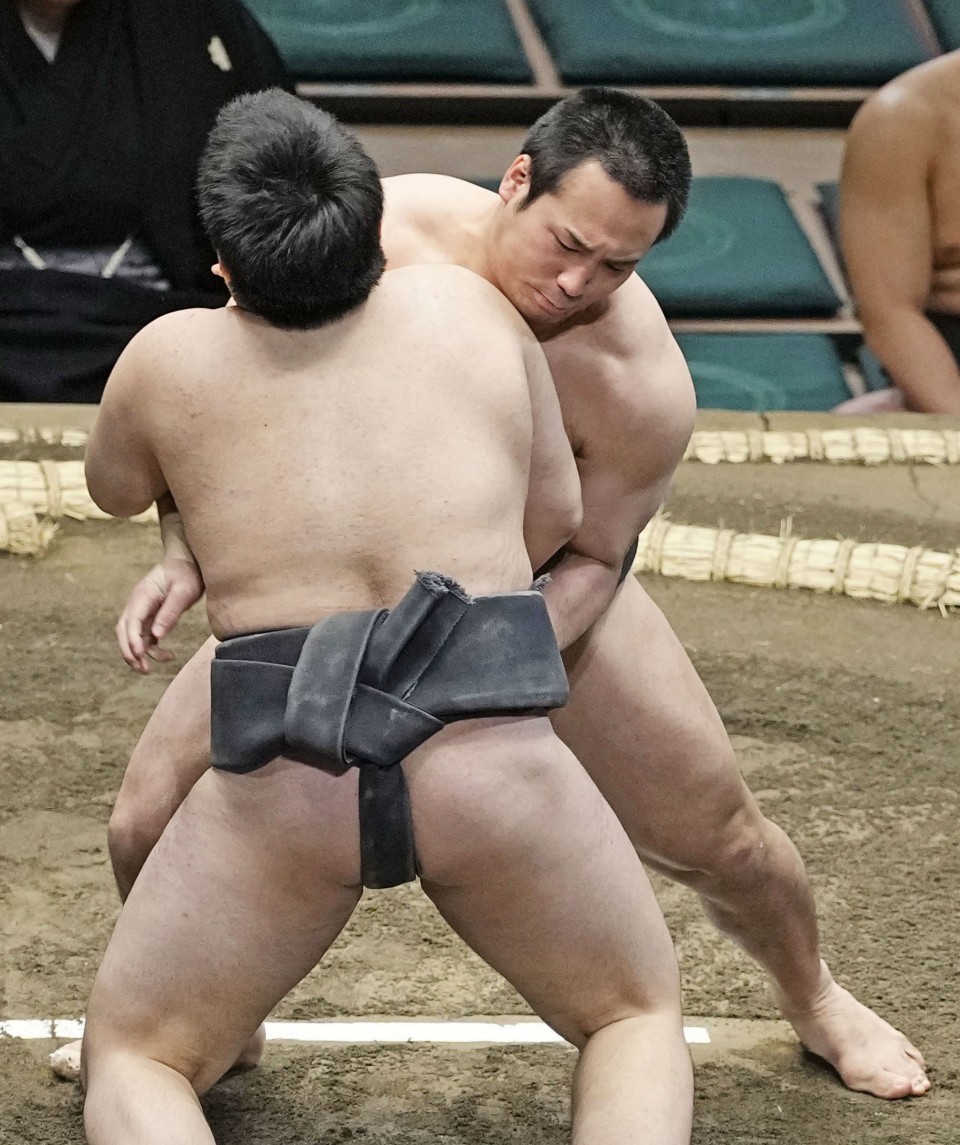 Hotaka Suyama (back) makes his maezumo debut at Tokyo's Ryogoku Kokugikan on May 10, 2022. (Kyodo)

"I tried to be aggressive. I was able to wrestle as I always do," he said.

Maezumo, which translates as "pre-sumo," took place on the third day of the ongoing Summer Grand Sumo Tournament in front of near-empty stands in the famous combat arena.

Unranked wrestlers who participate in the maezumo event need three wins at that level to become jonokuchi, the lowest division a wrestler can start his career.

The 1.80-meter-tall, 104-kilogram Suyama is a senior at Japan's leading university, whose alumni include bureaucrats and other elites, and is expected to graduate in the spring of 2023. He fights out of the Kise stable.

"If he doesn't follow proper stable manners, like how to clean and respond to greetings, the younger wrestlers will warn him. He may be the highly hyped Todai wrestler, but once in the sumo world, everyone is treated equally," his stablemaster Kise said.

Suyama started sumo when he joined Todai, as the University of Tokyo is widely known, and has served as captain of the club there. The wrestler, who said his dress code of yukata and geta attracts unwanted attention on campus, is eager to put on more weight and kick-start his climb up the sumo ranks.

"I'm from Todai (which includes the kanji for east), so I want to aim to become ozeki on the (more prestigious) east side," Suyama said, also making a play on words with his university's kanji characters.

"I'm going to take it one day at a time, surely and steadily."

There have been four professional sumo wrestlers who attended national universities in the past, including sandanme wrestler Shoji who went to Saitama University, but none have made it to sekitori. The wrestlers in the top two divisions, makuuchi and juryo, are called sekitori and considered full-fledged rikishi.

The other national university attendees are Ichinoya of the University of the Ryukyus, Yuminosato of Kochi University and Masumeidai of Nagoya University.

The yokozuna grand champions stand at the top of the ranks, followed by ozeki, sekiwake, komusubi, and maegashira. Wrestlers who are in these five ranks compete in the top makuuchi division.