No. 2 maegashira Kotonowaka came into the final bout of Day 4 at Ryogoku Kokugikan having defeated all three ozeki, but he met his match against a grand champion whose fitness has been in doubt.

Returning from knee and ankle injuries that forced his early withdrawal in March, Terunofuji (3-1) answered some of the questions about his health as he outmuscled the son and namesake of former sekiwake Kotonowaka and grandson of late former yokozuna Kotozakura.

The Mongolian-born yokozuna seized the upper hand with an explosive opening charge, getting his right arm inside and his left outside on Kotonowaka's belt. The 24-year-old powerhouse could do little from there to resist being forced out. 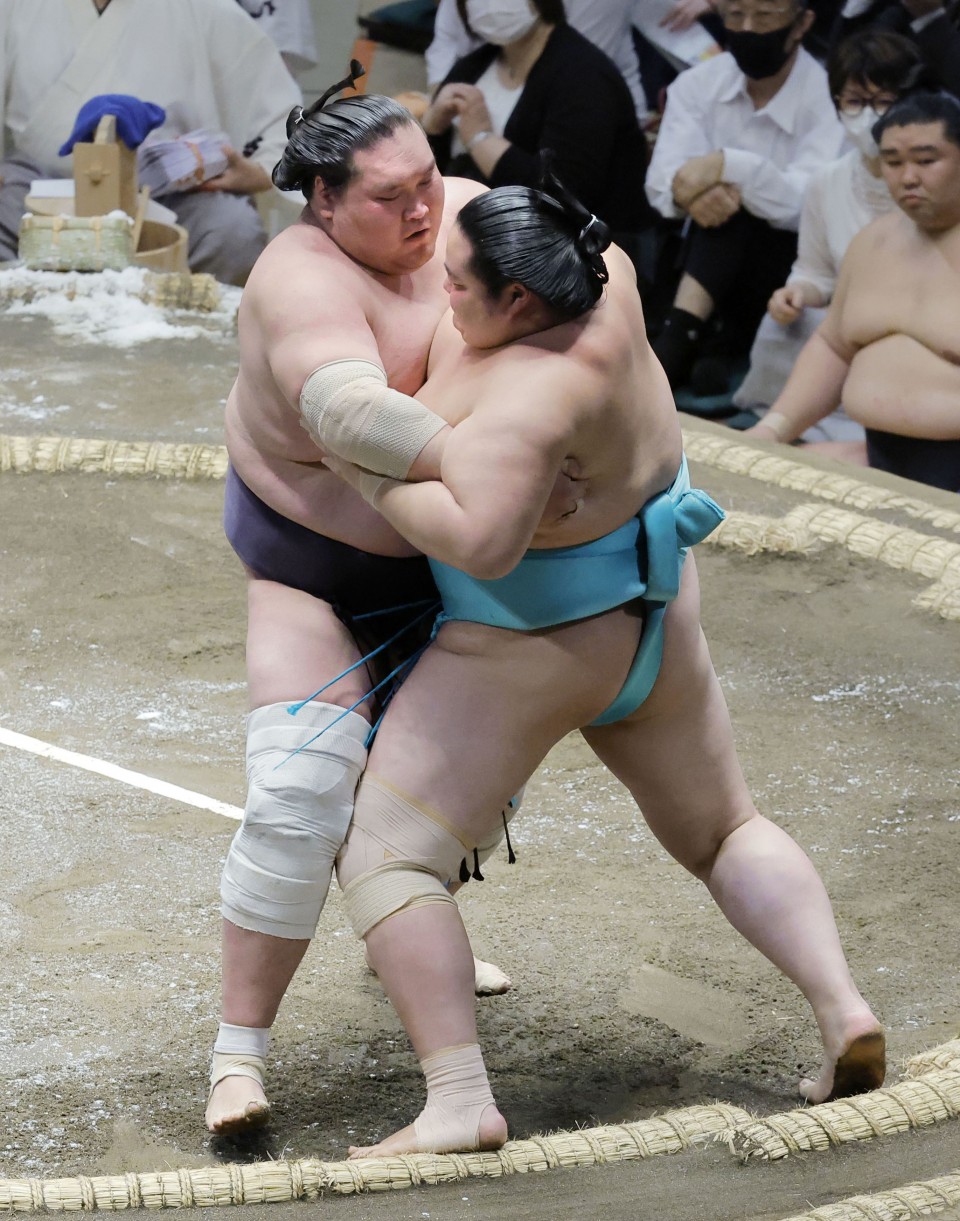 Terunofuji (L) defeats Kotonowaka on Day 4 of the Summer Grand Sumo Tournament at Tokyo's Ryogoku Kokugikan on May 11, 2022 (Kyodo)

Following a subpar start by all three ozeki, the entire trio of Takakeisho, Shodai and Mitakeumi were victorious on the same day for the first time at the 15-day meet.

Takakeisho earned a much-needed win against one of the division's other ascendant talents, Mongolian komusubi Hoshoryu, in a result that left both wrestlers at 2-2.

The two-time Emperor's Cup winner kept Hoshoryu off his belt and thrust the 22-year-old nephew of yokozuna Asashoryu down with a two-handed shove.

The beleaguered Shodai (1-3) earned his first win by taking down No. 1 Takayasu. Shodai was driven all the way to the edge by Takayasu (1-3) before wheeling the former ozeki around and pushing him out.

Mitakeumi (2-2) won by arm-lock throw against Mongolian No. 2 Kiribayama, who hung on stubbornly after being driven back to the edge. The ozeki had to withstand a spirited fightback from the maegashira, executing the winning move after being forced to take several steps backward across the ring.

Komusubi Daieisho (3-1), who upset Terunofuji on Day 1, claimed another high-profile victim in the form of sekiwake Wakatakakage (2-2), champion of the March grand tournament.

Former sekiwake Daieisho flew out of the blocks with a powerful thrusting attack before slapping Wakatakakage down.