Korean Central Television broadcast video footage of more than 1,000 military officers and soldiers attending the farewell for Hyon Chol Hae, marshal of the Korean People's Army and general adviser to the Ministry of National Defense, who died last Thursday. 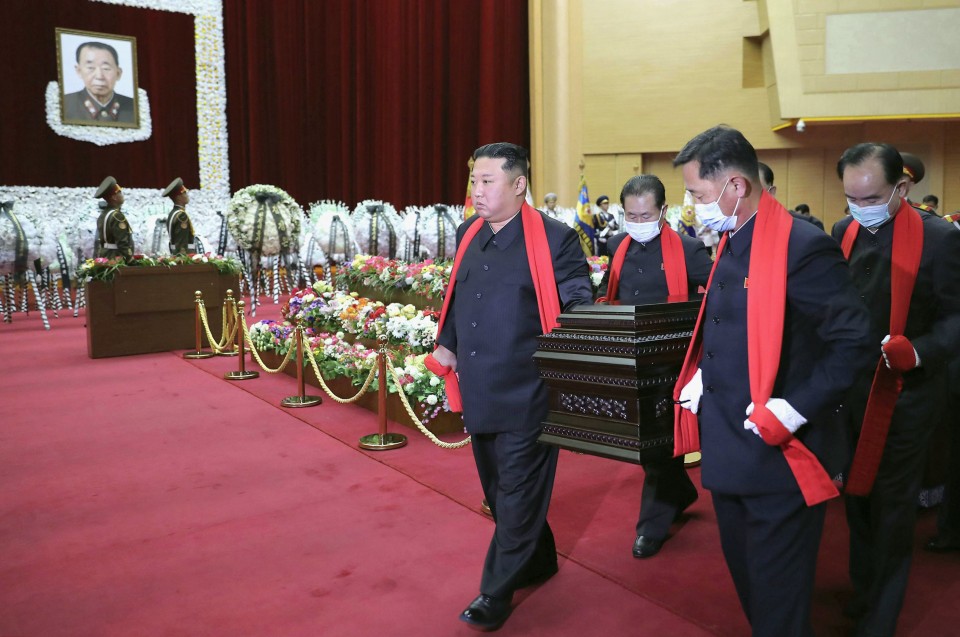 North Korean leader Kim Jong Un (L) carries the coffin during a state funeral for Hyon Chol Hae, marshal of the Korean People's Army and general adviser to the Ministry of National Defense, in Pyongyang on May 22, 2022. (KCNA/Kyodo)

North Korea on Monday reported over 167,000 new fever cases, bringing the total number to more than 2.81 million since late April, amid the COVID-19 outbreak in the nation with a population of 25 million.

One more death was reported in the 24 hours through 6 p.m. Sunday, with the accumulated number of deaths since late April standing at 68. More than 479,000 people were being treated, and over 2.33 million people have recovered, according to the media.

At the funeral, Kim did not wear a face mask. He "spread earth on the remains, repressing his sorrow over the last parting with a precious veteran of revolution, whom he heartily respected and dearly treasured," the official Korean Central News Agency said.

As Hyon is believed to have given military training to Kim, the current leader might have decided to hold a state funeral for the late marshal to pay tribute to him despite the COVID-19 pandemic, North Korea watchers said.