North Korea on Friday reported more than 263,000 new fever cases, bringing the total number to over 2.24 million for the past three weeks, amid the spread of the novel coronavirus in the country of 25 million.

Two more deaths were reported in the 24 hours through 6 p.m. Thursday, with the accumulated number of deaths since late April standing at 65, according to the state-run Korean Central News Agency. 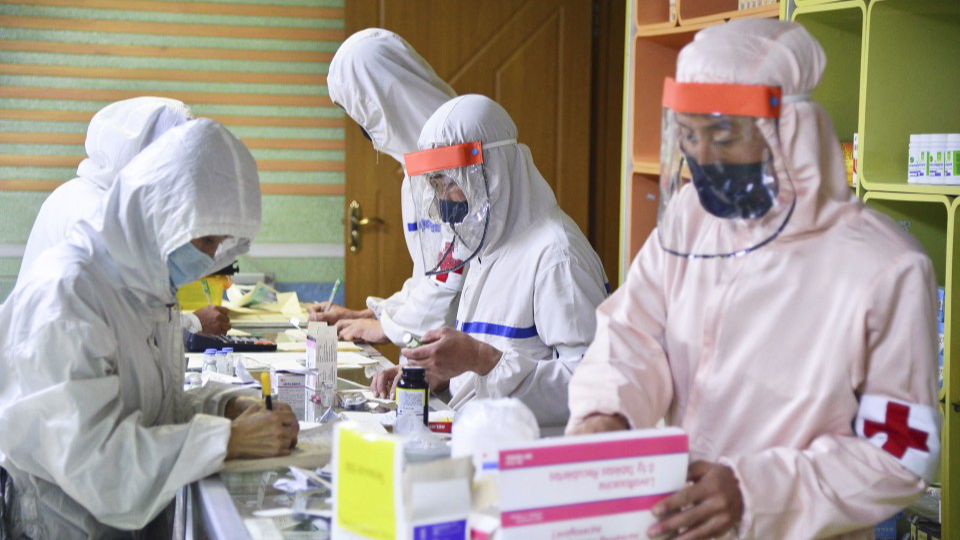 Members of the North Korean military's medical section (R) work to distribute medicine to citizens at a pharmacy in Pyongyang on May 18, 2022, to contain the spread of COVID-19 infections. North Korea reported what it claims is its first COVID-19 outbreak on May 12. (Kyodo) ==Kyodo

North Korea has not provided information on how many people have tested positive for the virus, as it is believed to have a limited number of COVID-19 testing kits. The origin of the fever spreading around the country has not been identified.

More than 754,000 people were being treated and over 1.48 million people have recovered, KCNA said.

On Thursday, South Korea's spy agency cast doubt on whether the North's recent daily reports truly reflect the number of people infected with the coronavirus.

The agency said that a considerable number of the fever cases that North Korea has reported have included patients with other infectious diseases such as typhoid.

Since early 2020, North Korea has blocked its borders with China and Russia in an attempt to prevent the intrusion of the novel coronavirus, first detected in the central Chinese city of Wuhan in late 2019.

Freight train operations between North Korea and China resumed in January after a plunge in bilateral trade hurt North Korea's economy, apparently making it difficult for its people to receive adequate food and daily necessities.

But China said late last month that it had suspended freight train operations with North Korea again amid the spread of the virus in the Chinese border city of Dandong.