A peace memorial hall in Nagasaki, the Japanese city destroyed in a U.S. atomic bombing during World War II along with Hiroshima, recently started showing a short movie that depicts the agonies of four women who were scarred by the bombing but survived its aftermath.

The 22-minute film "Women's Nuclear Bomb," shown at the Nagasaki National Peace Memorial Hall for the Atomic Bomb Victims, is a compilation of photos and illustrations, as well as a narration based on notes written by the women who said they experienced anguish and sadness because of their gender. 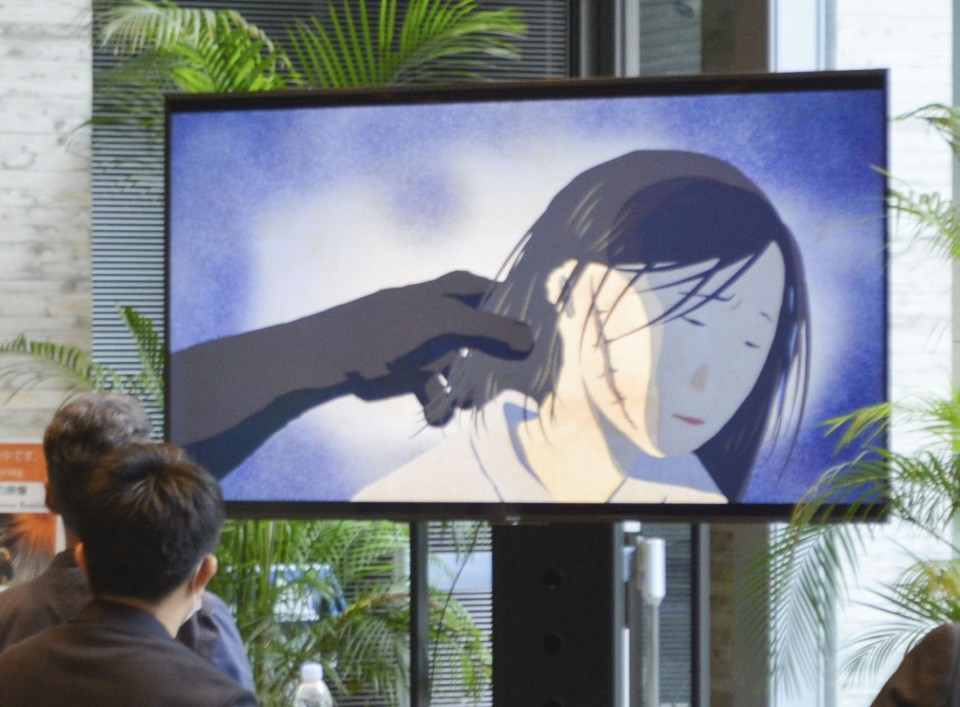 Photo taken at the Nagasaki National Peace Memorial Hall for the Atomic Bomb Victims on April 14, 2022, shows a scene from the short movie "Women's Nuclear Bomb" depicting four women who were scarred by the 1945 atomic bombing of Nagasaki in World War II. (Kyodo)

"My youth was really monotonous," Reiko Fuchimoto wrote in her notes. The Aug. 9, 1945, attack on the seaside city left the then 16-year-old girl with a deep scar on her face.

Fuchimoto said in her notes that after a man told her that a scar on a woman's face would negatively impact her chances of getting married, she felt "sadness deeply engraved into my heart."

She also reveals in her notes how she decided to divorce her husband after he noticed the scar, which she had been trying to keep hidden with heavy makeup.

Also depicted in the film, a video of the same-name exhibition between 2019 and 2020, is Semo Yamada, who lost her husband and home when the bomb dropped three days after the world's first deployed atomic bomb was dropped over Hiroshima.

Yamada, then 32, carried on with her two children, who also survived the bombing.

In her notes, Yamada described the struggles she faced as she went about living with her children in the postwar years. "I don't want to write about it. I can't say it was a life. We were just surviving. I think we were barely surviving."

Both women have since died.

Kota Fujii, a grandson of Yamada, attended a film preview at the memorial hall on April 14. "It was different from my impression of my grandmother, who was cheerful and full of vigor," the 48-year-old said.

Fujii, who lives in Yokosuka, Kanagawa Prefecture, said he never heard his grandmother tell her stories about the bombing and her life after the war.

"Footage in the film clearly shows the horror and tragedy of war," he said.

U.S. has responsibility to ensure nukes not used again: Blinken