Nagasaki marked the 76th anniversary Monday of the U.S. atomic bombing of the city in World War II, with its mayor urging the Japanese government to take a more active role in realizing a world free of nuclear weapons.

At the annual memorial ceremony, Mayor Tomihisa Taue urged the government to sign and ratify a U.N. treaty banning nuclear weapons and join as an observer in its first meeting of state parties to the treaty, which came into effect in January, and explore building a nuclear-weapon-free zone in northeast Asia. 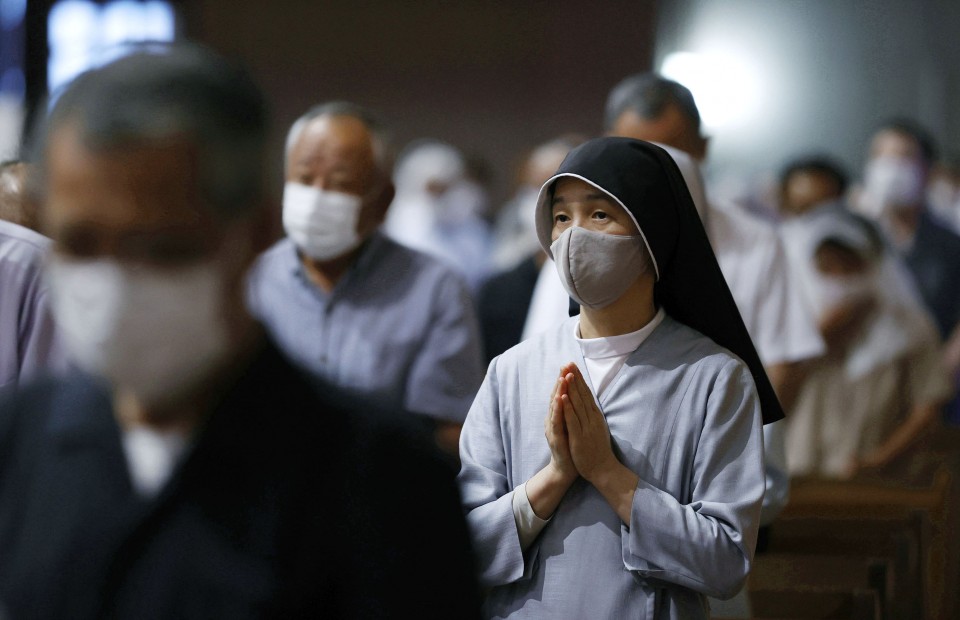 People pray at Urakami Cathedral in the vicinity of the U.S. atomic bombing hypocenter of Nagasaki, southwestern Japan, on Aug. 9, 2021, the 76th anniversary of the attack. (Kyodo)

After a moment of silence was observed at 11:02 a.m., the exact time of the bombing on Aug. 9, 1945, Taue praised the Treaty on the Prohibition of Nuclear Weapons as a "new horizon" for nuclear disarmament but also expressed concern about the growing danger presented by an ongoing nuclear arms race.

"In order to follow a single path toward a world free of nuclear weapons amidst these two conflicting movements, world leaders must commit to nuclear arms reductions and build trust through dialogue, and civil society must push them in this direction," Taue said in his speech at the city's Peace Park.

Taue's call on Japan to join the nuclear weapon ban treaty followed a similar appeal made by Hiroshima Mayor Kazumi Matsui three days ago, when the city, also devastated by an atomic bomb during World War II, had its annual ceremony.

But Prime Minister Yoshihide Suga again did not touch on the treaty when he addressed the crowd, which included survivors and families of the victims, reflecting the country's conflicted position.

Japan has maintained its three principles of not producing, possessing or allowing nuclear arms on its territory. But the country sits under the U.S. nuclear umbrella and hosts its military facilities under a decades-old bilateral security accord.

According to a research center at Nagasaki University, there were an estimated 13,130 nuclear warheads across the globe as of June, with the number in military stockpiles not decreasing amid reignited tensions among major nuclear powers. 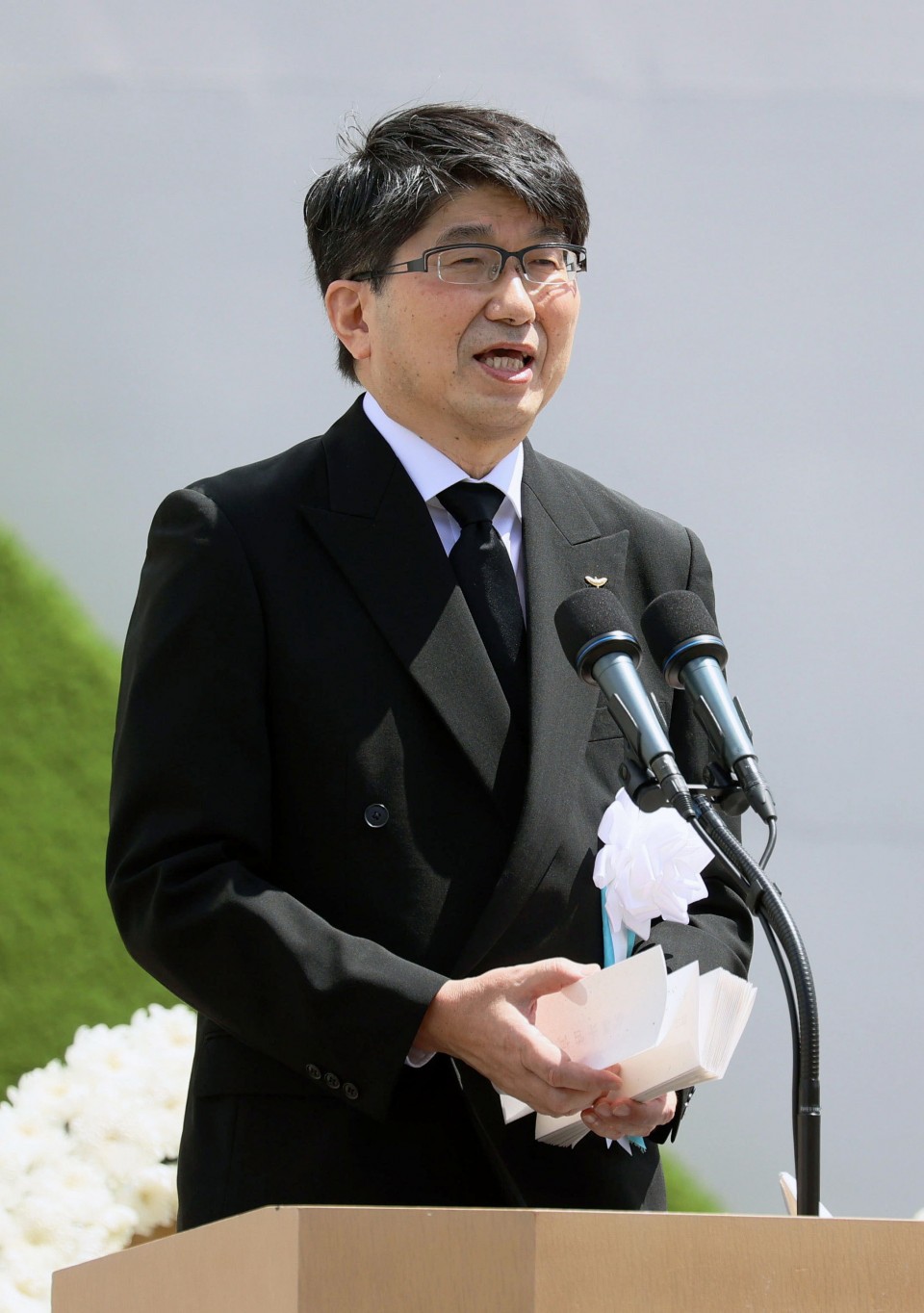 Nagasaki Mayor Tomihisa Taue delivers a speech at a ceremony marking the 76th anniversary of the U.S. atomic bombing of Nagasaki at Peace Park in the southwestern Japan city on Aug. 9, 2021. (Pool photo)(Kyodo)

The British government also said in March it was raising the cap on its nuclear warheads to 260 from 180, in a policy shift from nuclear disarmament and apparently increasing dependence on nuclear deterrence.

To counter the developments, Taue encouraged the international community to "speak out against the dangers inherent in nuclear weapons in order to bring about change in the world."

Delivering an almost carbon copy of the speech he made three days earlier at the ceremony in Hiroshima, Suga made sure to include the section he had mistakenly skipped at the time.

"As the only country to have suffered atomic bombings, it is Japan's unchanging mission to lead the efforts of the international community, step by step, toward the realization of a world free of nuclear arms," he said.

Meanwhile, U.N. Secretary General Antonio Guterres heralded the entry into force of the nuclear ban treaty and the willingness of the United States and Russia to engage in arms control dialogue as "cause for hope," but warned much work was left to be done.

"Prospects for the use of nuclear weapons are as dangerous as at any time since the height of the Cold War," Guterres said in a message read at the service by Izumi Nakamitsu, U.N. undersecretary general and high representative for disarmament affairs.

While the Japanese government has repeatedly pledged to lead the international community toward the abolition of nuclear weapons, it has refused to participate in the nuclear ban treaty, along with the world's nuclear-weapon states.

The pact, which currently has 86 signatory states, marks the first comprehensive ban on nuclear weapons.

The ceremony once again cut attendance numbers to around 500 guests, roughly a tenth of the number in recent years, to prevent overcrowding amid a nationwide resurgence of coronavirus cases. 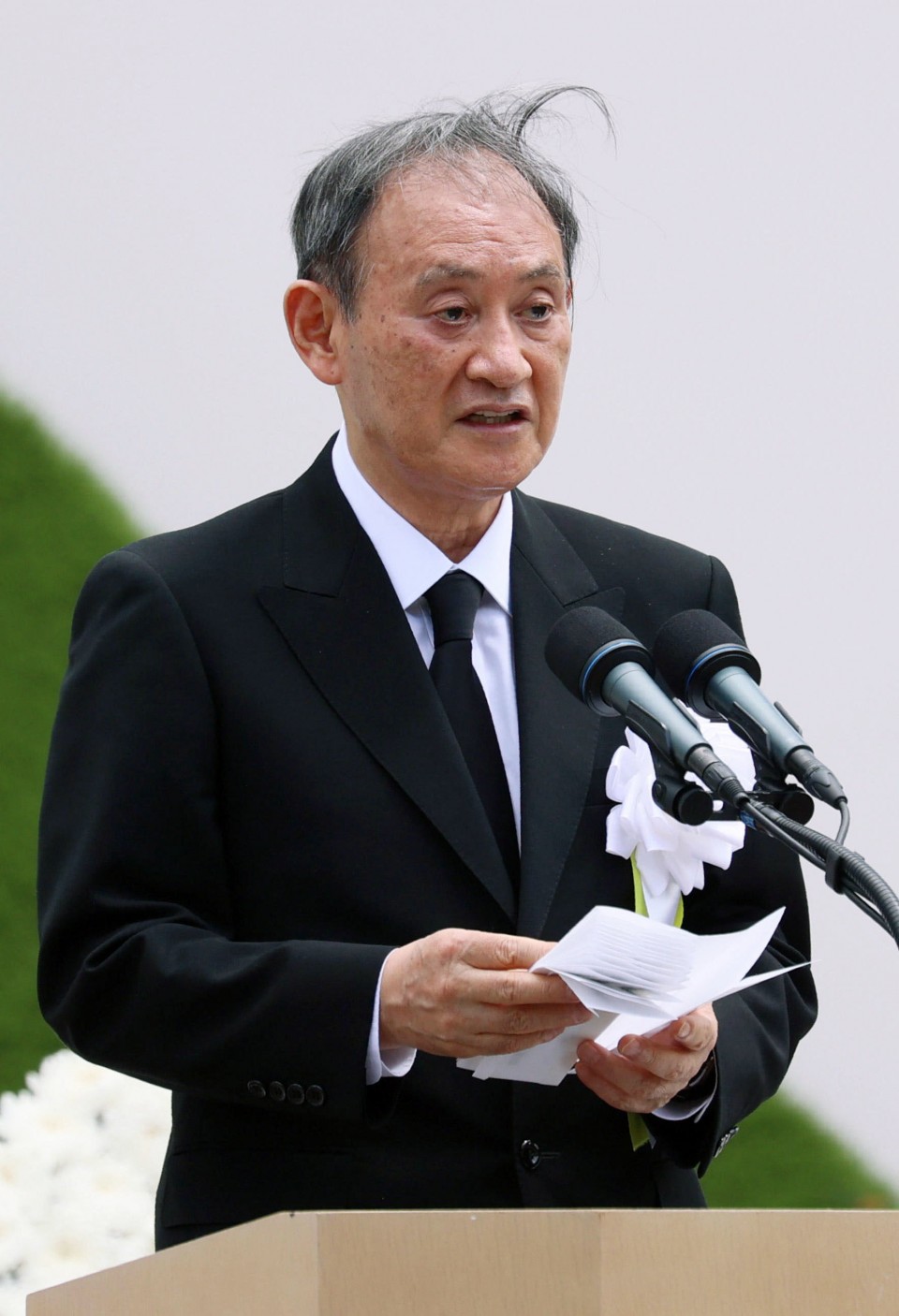 Representatives from 63 countries, including all five recognized nuclear powers -- Britain, China, France, Russia and the United States -- were in attendance.

Although there were concerns that a typhoon would cause heavy rainfall on the day, it had mostly passed by morning and only occasional raindrops fell when people visited the park to pray for victims ahead of the ceremony.

Chiyoko Motomura, an 82-year-old survivor, recalled being stabbed in the back by a shard of glass at the time of the explosion. She was only 6 years old at the time and was at her home, located around 4.5 kilometers from the hypocenter, during the summer school holidays.

"War and nuclear weapons are evil. We need to maintain peace," she said, adding that today's youth shouldn't take the current situation for granted.

Hisako So, another survivor who was a child at the time of the blast, said she usually comes around 6 a.m. every year to pray. But this year, she had come a little later only to find the park already closed to the general public due to COVID-19 restrictions.

"There are so many things I don't want to remember," the 83-year-old said. "But it couldn't be helped, since it was a time of war."

A plutonium-core atomic bomb codenamed "Fat Man" exploded over Nagasaki three days after the United States dropped the world's first such weapon to be deployed on Hiroshima.

An estimated 74,000 people died from the bombing in Nagasaki by the end of that year, according to the city.

The combined number of surviving victims of the two atomic bombings, known in Japan as hibakusha, stood at 127,755 as of March, down about 8,900 from a year earlier, the Ministry of Health, Labor and Welfare said, adding their average age was 83.94.

-- The Treaty on the Prohibition of Nuclear Weapons, which came into force this January, marks the first time in human history an international law clearly states that nuclear weapons are unequivocally illegal.

-- At the same time, the danger of nuclear weapons continues to grow amid an ongoing nuclear arms race.

-- World leaders must commit to nuclear arms reductions and build trust through dialogue, and civil society must push them in this direction.

-- Japan should join as an observer in the first meeting of state parties to the Treaty on the Prohibition of Nuclear Weapons, and sign and ratify the treaty as soon as possible.

-- Japan should look into building a nuclear-weapon-free zone in northeast Asia that would create a "non-nuclear umbrella" instead of a "nuclear umbrella."

-- Leaders of nuclear-armed nations and countries under their nuclear umbrellas should make substantial progress toward nuclear disarmament at the next Nuclear Non-Proliferation Treaty review conference.

-- The time has come for the international community to speak out against the dangers inherent in nuclear weapons, just as is being done in movements for decarbonization and sustainable development goals.

-- Nagasaki will continue to communicate the truth about what happened 76 years ago, while joining forces with young people of the last generation to directly hear the voices of the hibakusha.

-- Nagasaki demands relief measures to be extended to people not yet officially recognized as survivors despite experiencing the atomic bombings in the city and Hiroshima.

-- Japan to maintain its three non-nuclear principles and do its utmost to realize a world without nuclear weapons.

-- Japan, as the only country to have suffered atomic bombings, has a mission to lead the world's efforts toward the realization of a world free of nuclear arms.

-- nations need to work to remove mistrust and find common ground through mutual engagement and dialogue, amid the current harsh security environment and divergent opinions on nuclear disarmament.

-- Japan to contribute to making the next Nuclear Non-Proliferation Treaty review conference fruitful by endeavoring to find concrete measures countries can work on together.

-- the government remains determined to pass on the memory of the horrors of nuclear weapons in cooperation with atomic bomb survivors. 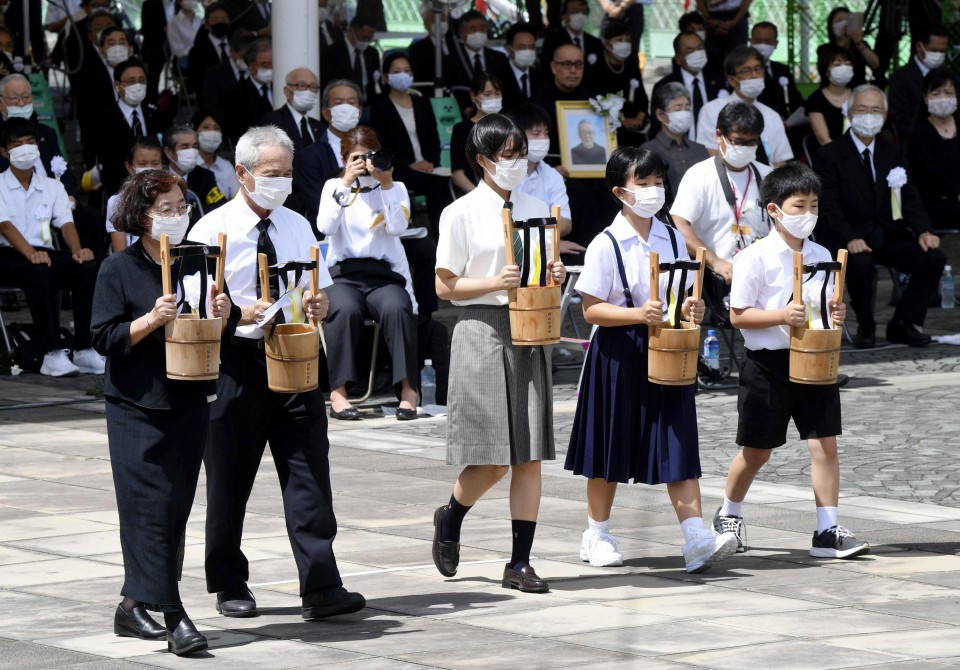