The win by opposition leader Anthony Albanese in Australia's tightly contested general election returns the center-left Labor Party to power for the first time in nine years, possibly bringing a slight but notable shift in approach to foreign policy in the Indo-Pacific region.

Prime Minister Scott Morrison was forced to concede defeat Saturday night after his Liberal-National coalition suffered major losses to a wave of so-called "teal" independent candidates, loosely aligned on issues such as climate change and integrity in government.

Teal is a greenish blue, seen as a reference to the political alignment of the independents as a greener version of liberals, whose symbol color is blue. 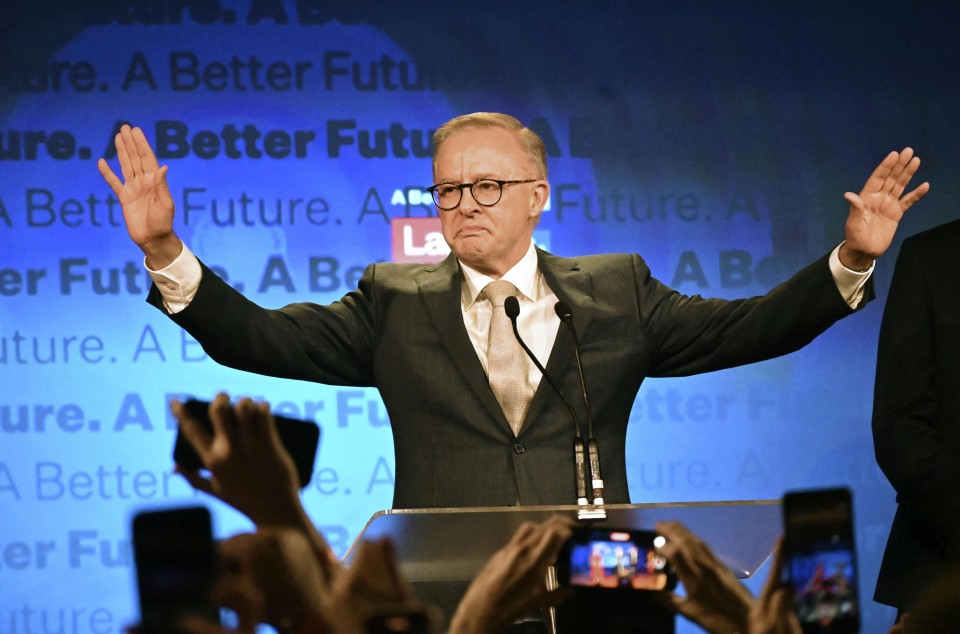 While the 6-week election campaign revealed little difference between the substantive foreign policy positions of the two major parties, experts predict a change in tone from the incoming government.

Lindy Edwards, a senior lecturer in international and political studies at the University of New South Wales, expects it will place a stronger emphasis on seeking to rebuild beneficial and cooperative relationships in the region.

That includes "a more measured and diplomatic approach" to Australia's frosty relations with China, its biggest trading partner, Edwards said.

Speaking to online news outlet The Guardian Australia during the campaign, Albanese admitted relations with China "will continue to be difficult" under any government but alluded to a slight softening in the approach.

"I support the Biden administration's perspective, which is competition without catastrophe. We need more considered responses to China's more aggressive positioning in the region than just ramping up rhetoric," he said.

His new government may also give rise to an improvement in the bilateral relationship thanks to a potential "change in tone," which could pave the way for restarting political dialogue between Canberra and Beijing, according to Richard McGregor, a senior fellow for East Asia at Australian think tank the Lowy Institute.

As for the relationship with Japan, McGregor believes there will be no significant change from the Morrison administration, with his party having broadly endorsed a policy direction with Tokyo.

Albanese has confirmed that he and incoming Foreign Minister Penny Wong will be sworn in on Monday, one day before a summit of the "Quad" leaders in Tokyo so that they can attend the meeting alongside U.S. President Joe Biden and the prime ministers of Japan and India.

However, vote counting is still under way to determine whether the Labor Party will secure the 76 seats in the lower house needed to form a majority government amid the record high support for minor parties and independents.

Until the party can form a clear majority government or strike a deal with the crossbench in the event of a minority, Albanese will likely be sworn in as "acting prime minister" and follow caretaker conventions, according to David Rothwell, a constitutional law expert at the Australian National University.

The meeting of the Quad just days after Australia's election presents an important opportunity for the incoming Albanese government "to back in and emphasize its support for the significance of the Quad," according to William Stoltz, a senior adviser for public policy at the Australian National University's National Security College.

"Over the three years that we see ahead of us now under a Labor government...it's going to be really important to see efforts by Australia and the other Quad countries to really take more substantial, tangible action," Stoltz said.

"There's been quite a lot of diplomatic fanfare and enthusiasm around what the potential of the Quad could be since its reinvigoration, but there hasn't been a real tightening of really tangible outcomes through what the Quad should do," Stoltz said.

He said the summit also presents another important opportunity for Albanese to meet with Biden to reaffirm Australia's commitment to the AUKUS security pact with the United States and Britain, under which Canberra will seek to acquire nuclear-powered submarines.

Albanese took a stroll Sunday through his home suburb of Marrickville in Sydney's inner-west, with partner Jodie Haydon and his dog Toto, speaking to reporters before heading into briefings ahead of the Quad summit.

"Obviously, the Quad leaders' meeting is an absolute priority for Australia," Albanese said. "It enables us to send a message to the world that there is a change of government, there will be some changes in policy, particularly in regard to climate change and our engagement with the world on those issues."

Vote counting is set to continue in the days following Saturday's election, as postal votes and preference flows will determine the final few members in the 151 seats in the House of Representatives.

Albanese and four senior colleagues expected to be sworn in on an interim basis Monday will divvy up all ministerial portfolios between them until the final election results are tallied, which could take several days or even weeks.