Japan on Tuesday compiled a 6.2 trillion yen ($48 billion) emergency economic package to mitigate the impact on households and smaller firms of rising prices, partly blamed on Russia's invasion of Ukraine.

The key features of the package include cash handouts of 50,000 yen per child for low-income households, more subsidies for oil wholesalers to bring down retail gasoline prices and support for struggling small and medium-sized companies, as well as livestock farmers.

The relief measures, compiled before a House of Councillors election in July, come as rising fuel costs and food prices threaten to hurt consumer sentiment, with the economy yet to fully recover from the COVID-19 pandemic fallout. 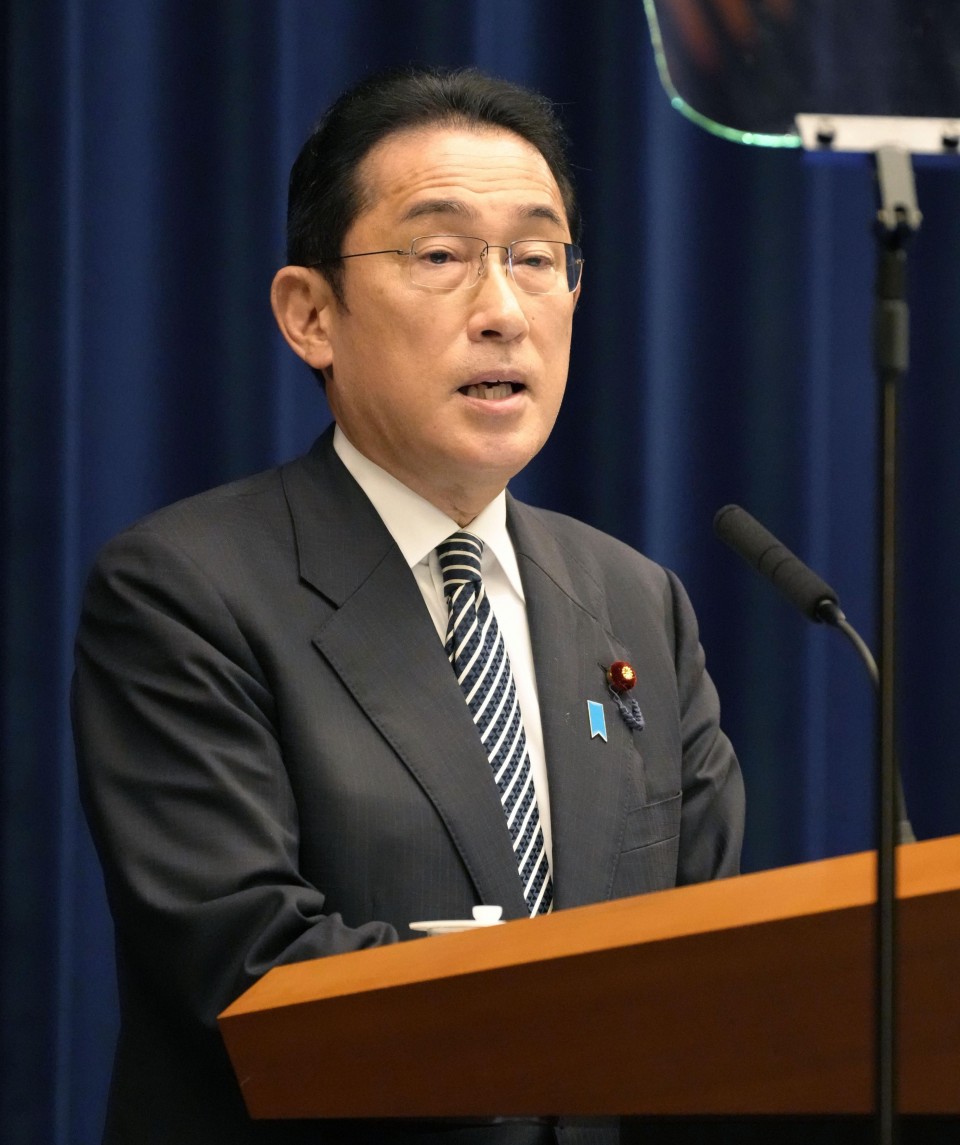 Prime Minister Fumio Kishida holds a press conference at his office in Tokyo on April 26, 2022. (Kyodo)

The size of the economic package will be 13.2 trillion yen when the use of private-sector funds is added.

"We should prevent surging raw material and other prices from becoming a bottleneck to the recovery of social and economic activities from the COVID-19 pandemic at any cost," Prime Minister Fumio Kishida told a press conference.

"Rising food prices are a big problem for households."

To finance the new spending, the government will tap 1.5 trillion yen from reserve funds allocated for emergency spending in the current business year that began in April, around 2 trillion yen secured in the fiscal 2022 budget and other sources, as well as 2.7 trillion yen from an extra budget to be compiled later.

The supplementary budget will be drafted based on an agreement reached after the ruling Liberal Democratic Party acquiesced to junior coalition partner Komeito's calls for sufficient funds to support the economy.

Heavily indebted Japan has already passed a record 107.60 trillion yen budget for fiscal 2022, putting the restoration of its fiscal health, the worst among major economies, on the back burner, amid what Kishida has called a "double whammy" for the economy of the COVID-19 pandemic and the crisis in Ukraine.

The government will spend 1.5 trillion yen on bolstering steps to counter surging crude oil prices and raise the current subsidy for oil wholesalers to 35 yen per liter from 25 yen. Aviation fuel will be subject to the subsidy program that currently covers fossil fuels, such as gasoline and kerosene.

Around 1.3 trillion yen will be used to support struggling households. The government will provide cash handouts for low-income households, including single-parent families, using about 200 billion yen of the total amount.

For small and medium-sized companies reeling from higher prices and the pandemic, another 1.3 trillion yen will be allocated.

The existing program to extend zero-interest loans without collateral will be extended until the end of September, while the government will provide support so smaller firms can pass higher costs on to consumers.

Another 500 billion yen will go to steps to ensure stable supplies of energy, raw materials and food items, the sources said.

To help households, the government will keep the price of imported wheat sold by the government at the levels they were before surging due to the Ukraine crisis until September, and assist in more diversified procurement of raw materials, including rare earth elements such as palladium, to curb Japan's dependence on Russia.

Firms in the marine product processing industry will get assistance in procuring seafood, such as crabs, sea urchins, and salmon roe, from countries other than Russia. The government will also support the use of domestic lumber as imports from Russia have also been banned, Kishida said.

The LDP and Komeito expect a draft extra budget to be submitted to parliament in late May, with passage expected before the current regular Diet session ends on June 15.

As the second stage of efforts to support the economy, the government will craft an action plan by June to achieve wealth distribution, the centerpiece of Kishida's agenda to create a new form of capitalism, and unveil specific steps to achieve the goal after the upper house election.