The Bank of Japan needs to continue its monetary easing policy, the central bank's governor Haruhiko Kuroda said Friday, defending the accommodative stance amid growing concern that it has triggered rapid depreciation of the yen against the U.S. dollar.

The BOJ's position is in stark contrast with the U.S. Federal Reserve and the European Central Bank, among other financial authorities in developed countries that are moving toward a tightening of monetary policy following emergency steps to address the economic downturn amid the coronavirus pandemic. 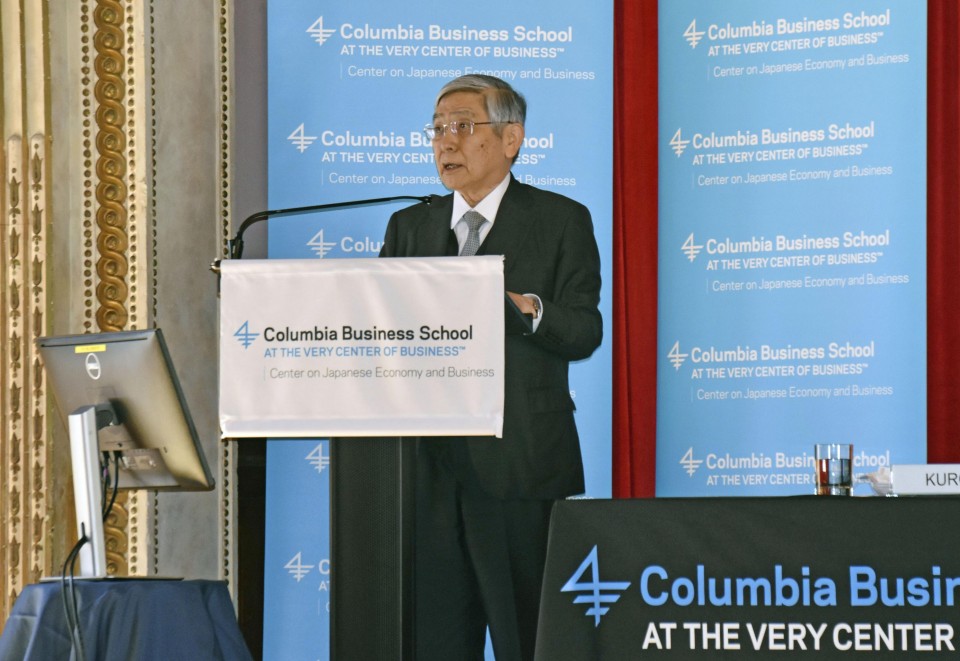 "The economic conditions of Japan and the United States differ greatly and the BOJ needs to continue its current monetary easing policy," Kuroda said in a speech at Columbia University in New York.

Kuroda, who visited the United States to attend a series of international financial meetings including the Group of 20 ministerial gathering in Washington this week, said the inflation in Japan stems only from surging raw material prices and "lacks sustainability."

The BOJ aims to target an inflation rate of around 2 percent in a stable manner as a long-term policy goal.

Compared to the United States, the economic and labor market recovery in Japan remains sluggish, he said, adding that resource-scarce Japan is more susceptible than other economies to rising raw material costs and side effects from sanctions imposed on Russia over its invasion of Ukraine.

"By persistently continuing the monetary easing, we will support the economic rebound and prompt a positive cycle of the economy," the BOJ governor said.

At the same time, Kuroda ruled out the possibility of taking further accommodative steps, saying the Japanese economy is not so fragile as to require additional monetary easing.

He did not make any remarks directly related to foreign exchange rates.

The divergent policy paths between the BOJ and the Fed, which has signaled aggressive interest rate hikes toward the end of this year to curb rising inflation, resulted in the Japanese currency sinking to a fresh 20-year low in the 129 zone against the dollar earlier this week in Tokyo.