Adjusting to Japanese baseball can be tough, as many former MLB players can attest, but Jesse Biddle has hit the ground running, competing with visible energy as a member of the Osaka-based Orix Buffaloes' bullpen.

The 1.96-meter lefty has quickly gained attention among Japanese baseball fans on social media, who have shared images of his animated reaction after retiring batters for the defending Pacific League champions.

His upbeat demeanor makes him appear more settled than one might expect, given his delayed arrival in Japan due to the country's tight coronavirus border controls. 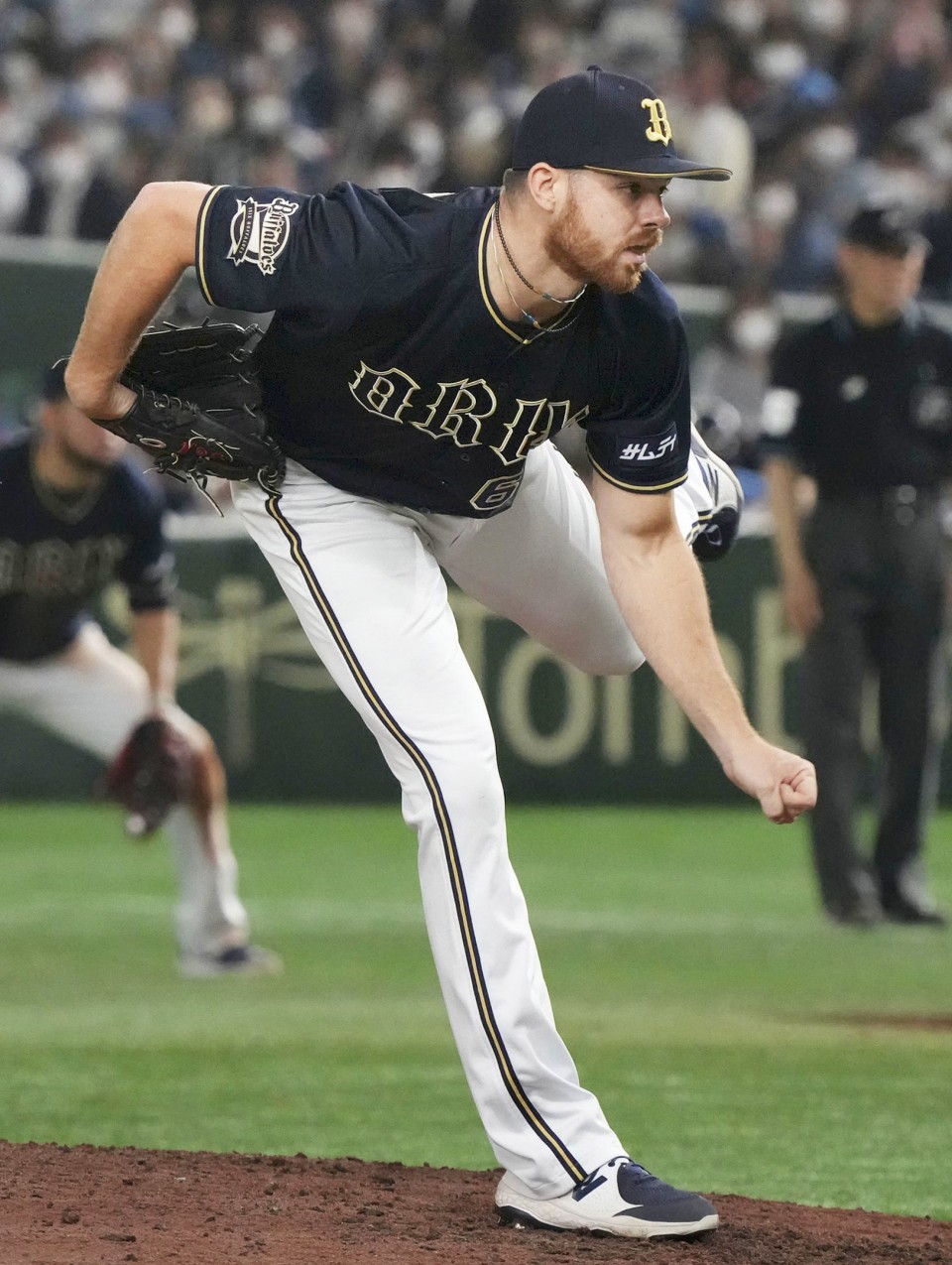 "This is my 12th year of professional baseball. I'm used to having a spring training," he told Kyodo News in a recent interview.

"This was really a new challenge. Not only moving to a new country, but also getting thrown into the fire. I came here on March 12 and the season started March 25, so I did two kind-of spring training outings and was as ready to go as I could be."

Through his first 11 games, Biddle was 2-0 with seven holds. He'd allowed one run on eight hits, five walks and a hit batsman while striking out 17 as the Buffaloes seek to win back-to-back pennants.

It shouldn't be as easy as Biddle has made it look, since Japanese baseball poses different challenges for players who have honed their game in the United States.

Pitches that worked well against MLB batters trying to drive everything over the wall can become gift-wrapped offerings for Japan's numerous slap hitters.

"There was just no way for me to know...how my specific stuff is going to play here until I found out," he said.

Two of the differences he has encountered are related to Orix's more traditional approach compared to MLB, where most teams rely heavily on data-driven analysis, guiding extreme defensive shifts and suggesting relief pitching matchups.

"You notice in the States with analytics, oftentimes the manager is not actually making a decision. It's coming from a computer upstairs," Biddle said.

"You can be pitching the eighth inning but you could also be pitching the second inning. That's a really tough place to be. That's something that analytics doesn't necessarily take into account."

The Buffaloes have eliminated that concern by clearly defining their expectations.

"I have such a good rhythm here now," he said. "It's only been a few weeks...but I really feel like I'm in mid-season form and in a really good routine. I have the team to thank for that."

"I know that I have the eighth inning if we are tied or we are winning."

Biddle's fire on the mound seems to be all his own thing, however, beginning with his entrance from the bullpen. In Japan, these are typically under the stands and isolated from the game's buzz and energy.

"You're sort of waiting for your turn in the arena and then you run out and you feel that gust of wind, you see the thousands of fans, and you feel like it's your turn to shine," he said. "I really like it. It makes it that much more special every time you get the ball."

He has so far made it look special, and fun, although it hasn't always been that way for him.

Biddle has had an up-and-down career, starting as the first draft pick of his hometown Philadelphia Phillies in 2010. In the process he said he's asked himself numerous times why he still plays.

His answer has been on display for the Buffaloes in the battle between pitcher and hitter. That, he said, allows him to avoid getting hung up on the larger ramifications of success or failure.

"That's when you get into trouble," he said.

Instead, Biddle returns to baseball at its simplest level: Throw the ball, hit the ball.

"There's just nothing in this world that equals the feeling of beating the hitter. Every time I go out there, my goal is to prove that I'm better than the guys in the box."

"I play the game...for the love of the competition."