The Japan championship was Yakult's first since 2001 and the first by a CL club since 2012. 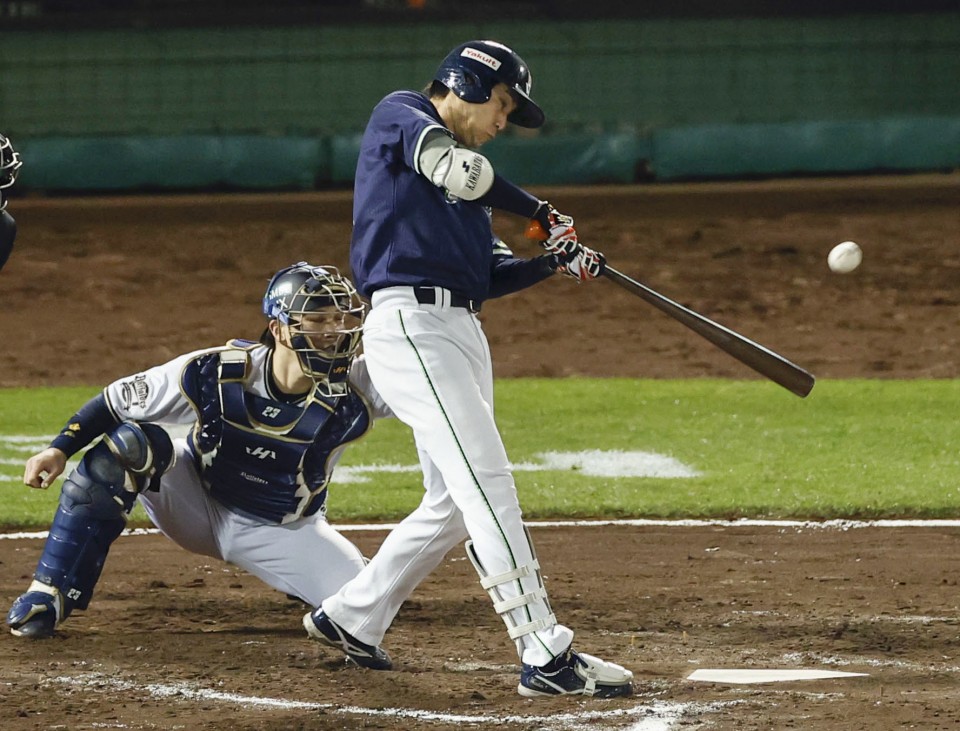 Shingo Kawabata of the Yakult Swallows has a pinch-hit RBI single in the top of the 12th inning against the Orix Buffaloes in Game 6 of the Japan Series on Nov. 27, 2021, at Hotto Motto Field Kobe in Kobe, Hyogo Prefecture. (Kyodo) ==Kyodo

With the game tied 1-1 since the fifth inning, the Swallows broke through in the 12th against Orix's sixth pitcher, Ryo Yoshida. A two-out Yasutaka Shiomi single and a wild pitch put the runner in scoring position for Kawabata, whose little flare found space to fall in shallow left for the tie-breaking single.

With Japan Series games only allowed to go 12 innings before being called a tie, Kawabata represented Yakult's last chance to prevent the series from going to Game 7.

"All season long, he got the job done for us," manager Shingo Takatsu said of Kawabata. "With two outs in the 12th inning, an out would eliminate our chance to win. It wasn't much of a hit, but it was tremendous batting on his part." 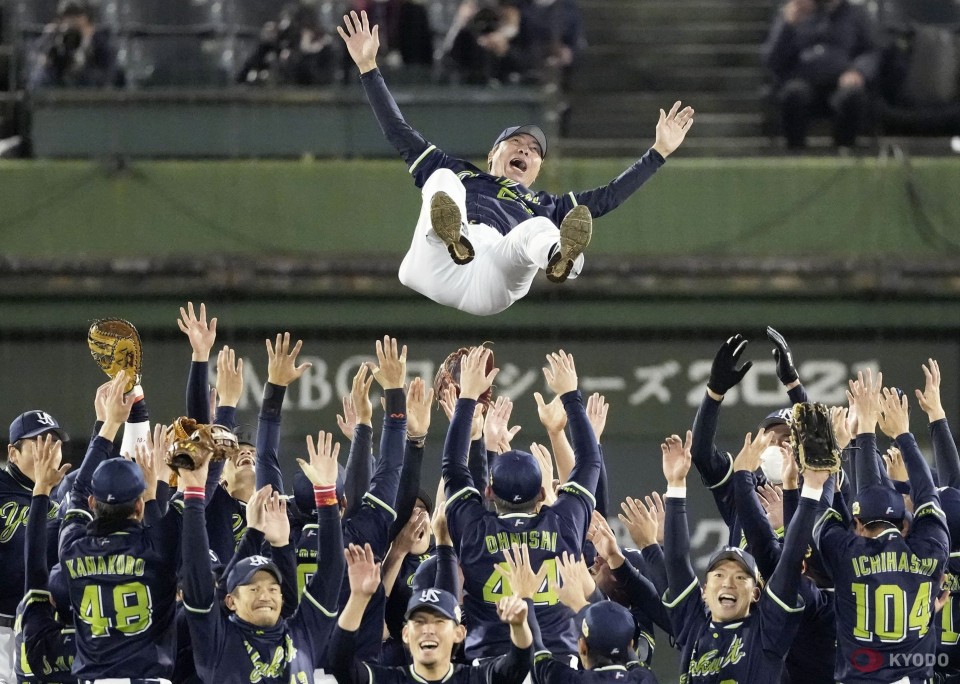 Yakult Swallows manager Shingo Takatsu (top) is tossed in the air by his players after the Swallows claimed their first Japan Series baseball title in 20 years with a 2-1, 12-inning Game 6 win over the Orix Buffaloes on Nov. 27, 2021, at Hotto Motto Field Kobe in Kobe, Hyogo Prefecture. (Kyodo) ==Kyodo

Yakult closer Scott McGough (1-2) took the mound with two outs in the 10th and retired five straight before putting the potential tying run on in the 12th by hitting a batter. But the right-hander hung on to get the final two outs and end the PL's long reign of postseason dominance.

"It was really a hard season, coming off back-to-back last-place finishes, so the joy right now is off the charts," Swallows manager Takatsu said. "We wanted to represent the Central League with pride, but the Buffaloes were extremely difficult opponents, so this was no easy task."

With regular-season and playoff games this season limited to nine innings to reduce the risk of infections amid the coronavirus pandemic, the game was the first in Japan in over a year to go to extra innings.

Orix ace Yoshinobu Yamamoto allowed a run over nine innings at Hotto Motto Field Kobe, during which he gave up six hits, walked a batter, hit a batter and struck out 11 and threw 141 pitches.

Swallows right-hander Hirotoshi Takanashi was pulled after allowing his fourth hit of the game. He also allowed a run on four hits and two walks while striking out seven over 4-2/3 innings. Albert Suarez worked 2-1/3 innings of scoreless relief and setup man Noboru Shimizu two more to force extra innings.

"We came here to win tonight but knew we would have few chances against such a tough starting pitcher," Takatsu said. "Everyone took care of business at the plate and on the mound, and even though it took extra-innings, we got there."

"Starting with Takanashi until we got to McGough, all the pitchers were able to bring their unique talents to bear."

The teams exchanged fifth-inning runs. Jose Osuna singled to lead off the Swallows' fifth, was sacrificed to second and scored on a Yasutaka Shiomi single off Yamamoto. The Buffaloes then eked out a run on a pair of fluke singles.

Kenya Wakatsuki reached on a poorly hit ball to second that took a tricky hop. After a one-out sacrifice, leadoff man Shuhei Fukuda's weakly hit fly took a lucky bounce past shortstop, and Wakatsuki only scored because the throw home hit him in the arm while he was still coming down the third-base line.

McGough, Yakult's fifth pitcher, has surrendered Adam Jones' Game 5-winning ninth-inning home run and suffered both of Yakult's losses. He took the mound in the 10th and struck out PL home run champ Yutaro Sugimoto to end the inning and then hung on to earn the win in relief.

"The Orix hitters are so good. They never give away at-bats, so this was really hard for us, but our pitchers did an amazing job," Nakamura said.

The series championship is the Swallows' third against the Buffaloes' franchise, having previously beaten their predecessors, the Hankyu Braves in 1978 and the Orix BlueWave in 1995.