The operator of a tour boat that disappeared off Hokkaido last weekend with 26 people aboard publicly apologized Wednesday for causing the fatal accident, admitting its decision to give the green light to depart despite the chance of bad weather was inappropriate.

"I made the final decision to depart on the condition that the captain make the decision to turn back if the seas got rough," Seiichi Katsurada, the president of Shiretoko Yuransen, said in his first press conference since the 19-ton Kazu I went missing Saturday. "In retrospect, my judgment was wrong." 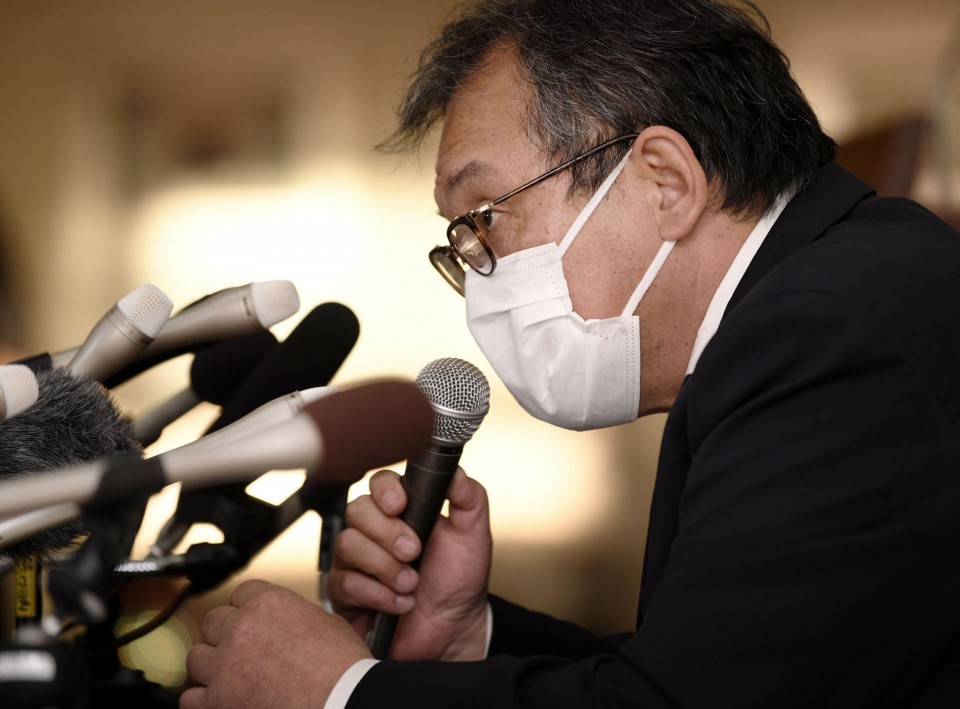 Seiichi Katsurada, president of Shiretoko Yuransen, the operator of the tourist boat with 26 passengers and crew aboard that went missing off Hokkaido, northern Japan, speaks at a press conference in the town of Shari on April 27, 2022. (Kyodo) ==Kyodo

Katsurada said he and Noriyuki Toyoda, the 54-year-old captain of the vessel, had met on the morning of the incident and determined the sea conditions were calm enough for the tour to depart at 10 a.m.

Eleven fatalities have been confirmed as of Wednesday, with all suspected to have drowned, according to investigators. Search operations by aircraft and vessels continue for the 15 people who remain unaccounted for.

Katsurada said the company will do its utmost to cooperate with the investigation into the cause of the accident, with the victims' families as the top priority.

Meeting with around 60 family members prior to the press conference, Katsurada twice fell to his knees and placed his forehead on the floor as he apologized in a trembling voice, according to attendees.

He also made the same pose in apology three times during the two-and-a-half-hour press conference.

The father of one of the victims said the apology, which came four days after the incident, was "just for show" and was "too late."

"A sincere action would have been coming to apologize immediately after the incident," he said at his home in Chiba Prefecture. 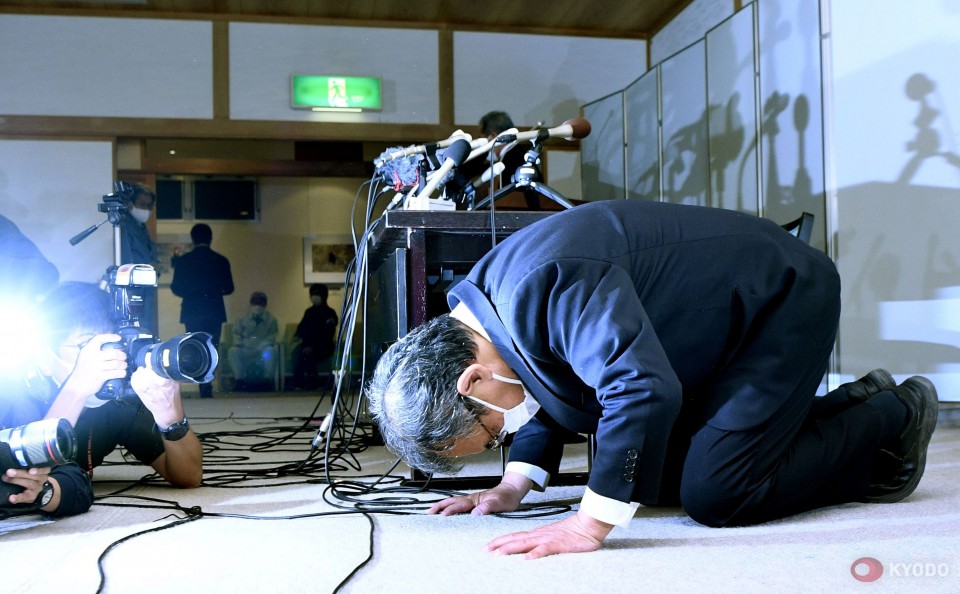 Seiichi Katsurada, president of Shiretoko Yuransen, the operator of the tourist boat with 26 passengers and crew aboard that went missing off Hokkaido, northern Japan, apologizes by getting down on his knees during a press conference in the town of Shari on April 27, 2022. (Kyodo) ==Kyodo

According to the Shari-based company, it was another tourist boat firm in the town, which was in contact with Kazu I, that first notified the Japan Coast Guard of its trouble at 1:18 p.m. Saturday.

Katsurada said he had known that the radio antenna at his office was broken on that day, but he did not feel it warranted canceling the tour as "we could communicate via cell phones or other operators' radios."

Before contact was lost, the vessel crewed by Toyoda and a deckhand told its operator at around 2 p.m. Saturday that it was listing 30 degrees, according to the coast guard.

In the ongoing search for the Kazu I itself, the coast guard said Wednesday that sonar readings detected near where the boat issued its first rescue call were due to undulations in rocks, and that it concluded its survey of the location.

The coast guard is investigating the incident with the possibility of building a case against the boat's operator on charges of professional negligence resulting in death or endangering traffic.

"Mr. Katsurada doesn't know anything about the sea or boats. Even in bad weather, he would order us to bring the boat out for the sake of sales," a 61-year-old deckhand who used to work for the company said.

Most of the local fishing boats remained in port due to anticipated high waves and strong winds on the day of the incident, and acquaintances warned Toyoda not to go out to sea.

Regarding Katsurada's decision to conditionally depart amid ominous sea conditions, the transport ministry said Wednesday that "no such concept exists in our safety management regulations."

More than half of Shiretoko Yuransen's staff, including crew, had quit over the past two years, leaving only three in recent days, according to people familiar with the company.

A skipper from another tour boat company said Katsurada's firm was cutting costs by letting go of experienced crew and hiring rookies at lower wages in their place.

"I told him he should leave some veteran crew, but he didn't listen," the 63-year-old said.

Toyoda joined the company in 2020 but was left to operate Kazu I and another of the firm's sightseeing boats by himself due to a shortage of staff at the time of the incident, they said.

The boat left port in Shari to cruise along the peninsula designated a World Natural Heritage site in 2005 and home to many rare species of animals and plants.

The incident occurred ahead of Japan's Golden Week holidays through early May. The Kazu I was the first tourist boat operating in the area this season.

According to the Ministry of Land, Infrastructure, Transport and Tourism, the boat ran into trouble twice last year, once in May when it collided with a floating object, injuring three passengers, and another in June when it ran aground in shallow water shortly after leaving port.

The coast guard referred Toyoda to prosecutors over the June incident, in which no one was injured. Katsurada said the ship had been sent for repairs last year following the two accidents and had passed inspections. 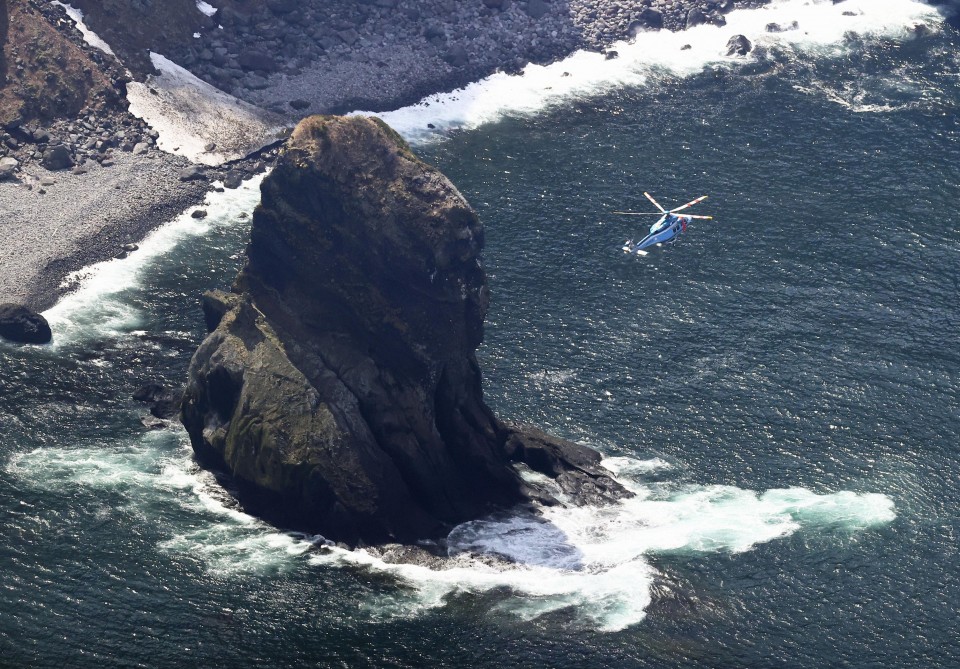 Photo taken on April 27, 2022, from a Kyodo News helicopter shows a police chopper searching near the Kashuni Falls, a popular scenic site near the tip of the Shiretoko Peninsula on Hokkaido, northern Japan, for missing people following a fatal tour boat accident on April 23 off the peninsula. (Kyodo) ==Kyodo