A child believed to be a 3-year-old girl was confirmed dead Monday, taking the death toll to 11 after a tourist boat with 26 passengers and crew aboard went missing in rough waters over the weekend off a World Heritage site on Japan's northernmost main island of Hokkaido, the coast guard and local officials said.

Having dispatched aircraft and vessels, the Japan Coast Guard and Self-Defense Forces are continuing to search for the remaining 15 people following Saturday's incident involving the 19-ton Kazu I.

According to the coast guard, the girl was found Sunday night in an unresponsive state in waters about 14 kilometers east of a lighthouse near the tip of the Shiretoko Peninsula, a popular destination in the northeast of Hokkaido known for drift ice tours. 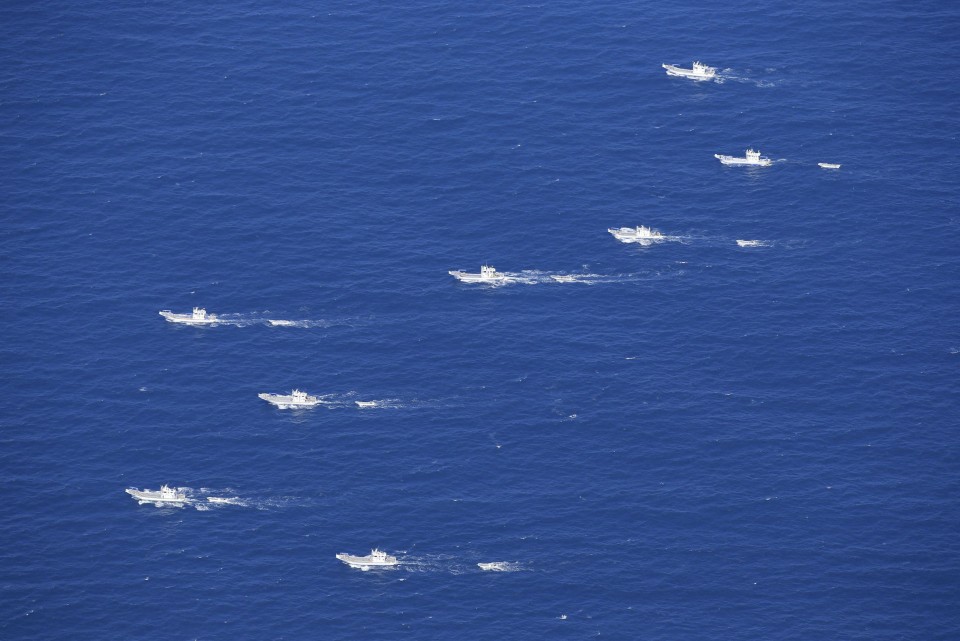 Photo taken on April 25, 2022, from a Kyodo News helicopter shows vessels searching for a tourist boat that went missing two days ago in the Sea of Okhotsk off the Shiretoko Peninsula in Hokkaido. (Kyodo)

In accordance with the International Convention on Maritime Search and Rescue, the coast guard on Monday notified Russian authorities it would be expanding the search area to waters effectively governed by Russia.

Beyond the lighthouse lie four long-disputed islands called the Northern Territories in Japan and the Southern Kurils in Russia.

The Russians acknowledged the communication but will not be assisting in the search, the coast guard said.

The child was likely to have drifted due to the wind and tide. According to officials in Shari, from where the boat departed, the girl was aboard with her parents who remain missing.

The coast guard and the Ministry of Land, Infrastructure, Transport and Tourism said the 24 passengers ranged in age from under 10 to their 70s.

All passengers and crew were believed to be wearing life jackets, but the girl was not wearing one when she was found. 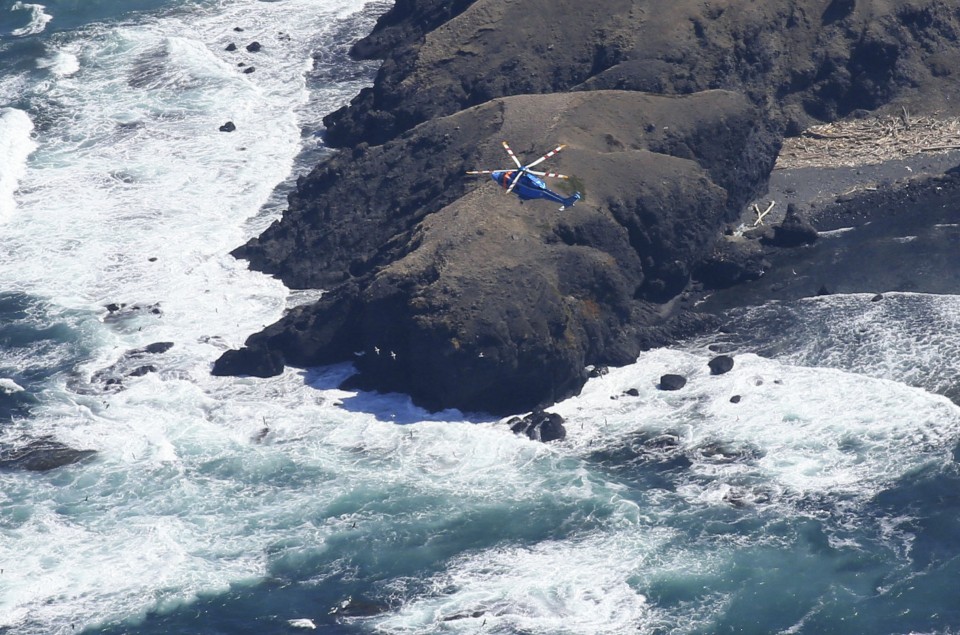 Photo taken from a Kyodo News helicopter shows a rescue helicopter searching near the tip of Cape Shiretoko in Hokkaido on April 25, 2022, two days after a tourist boat went missing in in the Sea of Okhotsk off the Shiretoko Peninsula. (Kyodo)

The vessel, crewed by 54-year-old captain Noriyuki Toyoda and a deckhand, told operator Shiretoko Yuransen it was listing 30 degrees around 2 p.m. Saturday before contact was lost, according to the coast guard.

The transport ministry began an investigation Sunday with an on-site inspection of the boat operator, while the Japan Transport Safety Board has sent officials to the local coast guard office to look into the incident.

Local fishing boats and tourist vessels have joined the search, using sonar to locate the boat which they suspect may have sunk.

On Monday, the ministry's Hokkaido Regional Development Bureau said waves had risen suddenly on the day of the incident.

Until 11:30 a.m. Saturday, around an hour and half after the boat departed, the significant wave height -- the average height of the highest third of the waves -- was 30 centimeters but had surged to 3.09 meters two hours later. 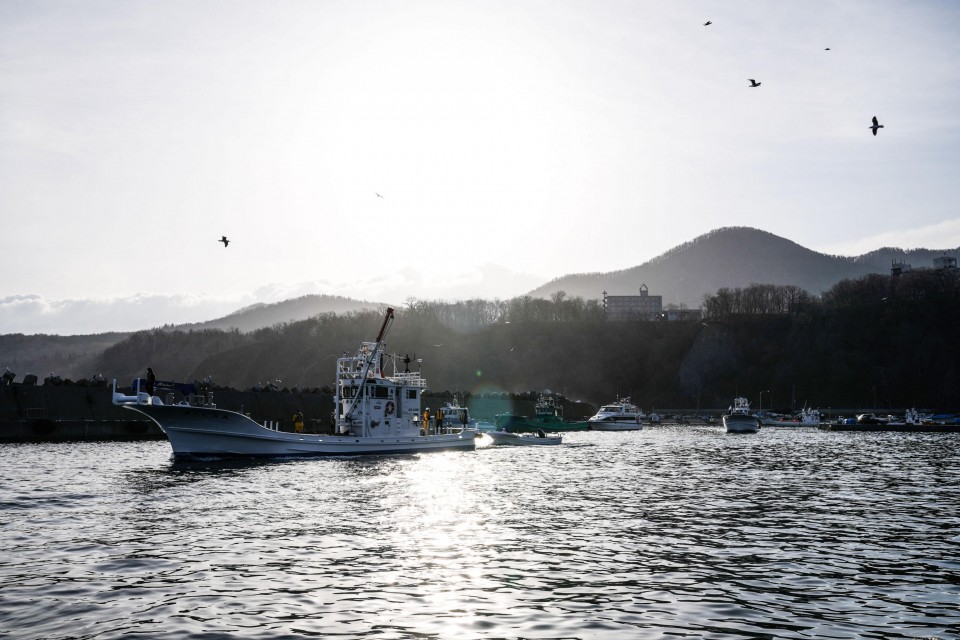 A fishing vessel from Shari on the northernmost Japanese main island of Hokkaido on April 25, 2022, prepares to search for a tourist boat that went missing with over 20 passengers and crew on April 23 in the Sea of Okhotsk off the Shiretoko Peninsula. (Kyodo) ==Kyodo

A local fisheries cooperative has said high waves and strong winds were observed around noon Saturday, prompting fishing boats to return to port before noon.

Multiple acquaintances had warned the boat's captain not to set out to sea, anticipating rough waters in the afternoon.

A regular inspection last Wednesday had found no problems with the boat.

While the president of the firm, which has been operating since 2001, has apologized, he did not provide a clear answer when the father of one of the missing passengers asked why the boat had left despite the high waves. 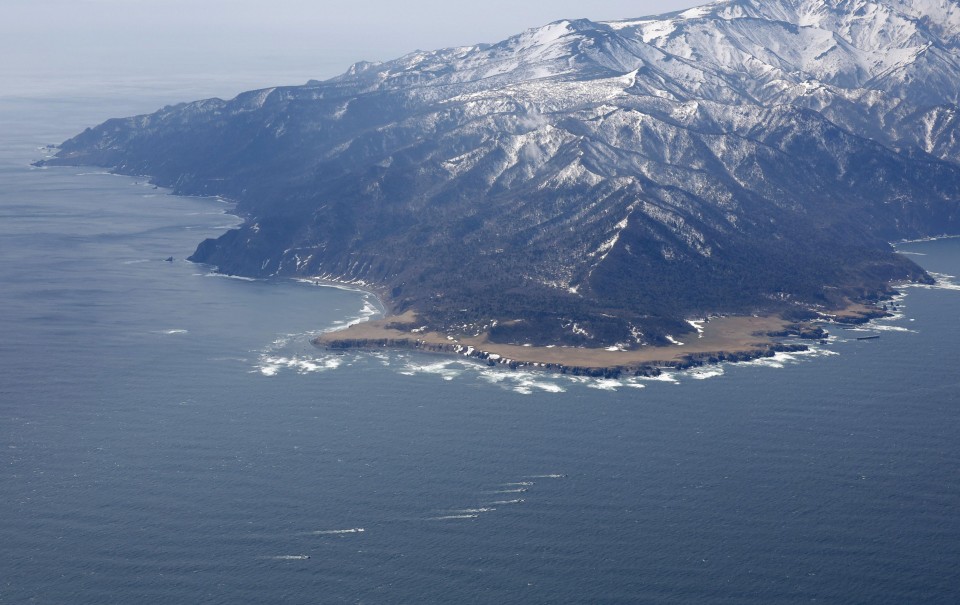 Photo taken on April 25, 2022, from a Kyodo News helicopter shows a fleet of ships searching for a tourist boat that went missing with over 20 passengers and crew on April 23 in the Sea of Okhotsk off the Shiretoko Peninsula on the northernmost Japanese main island of Hokkaido. (Kyodo) ==Kyodo

The boat left port in Shari on Saturday to cruise along the peninsula, designated as a World Natural Heritage site in 2005 and home to many rare species of animals and plants.

The incident occurred ahead of Japan's Golden Week holidays through early May. The Kazu I was the first tourist boat operating in the area this season.

According to the ministry, the Kazu I ran into trouble twice last year, once in May when it collided with a floating object, injuring three passengers, and another in June when it ran aground in shallow water shortly after leaving port.

The coast guard referred Toyoda to prosecutors over the June incident, in which no one was injured.