Ten people were confirmed dead Sunday after a tourist boat with a total of 26 passengers and crew aboard went missing in rough waters the previous day off a World Heritage site on Japan's northernmost main island of Hokkaido, the country's coast guard said.

Aircraft and vessels dispatched by the Japan Coast Guard and the Self-Defense Forces continue to search for the remaining 16 people and the 19-ton boat, Kazu I, which lost contact after reporting it was taking on water around 1:15 p.m. Saturday. 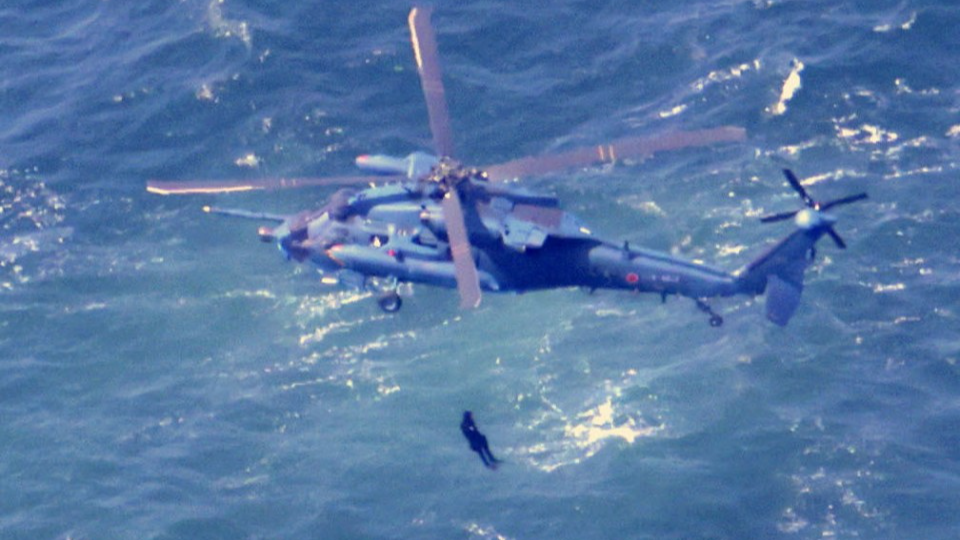 Photo taken on April 24, 2022, from a Kyodo News helicopter shows search and rescue operations under way in the Sea of Okhotsk off Shiretoko Peninsula on the northernmost Japanese main island of Hokkaido as a tourist boat went missing with its over 20 passengers and crew in the area the previous day. (Kyodo) ==Kyodo

The 24 passengers aboard ranged in age from under 10 to the 70s and included two children, according to the coast guard and the transport ministry.

Nine of the 10 confirmed dead were found in the water or on nearby rocks around 10 kilometers from where the boat issued its first rescue call. Of the 10, seven were men and three were women, according to the coast guard.

The boat left port in the town of Shari around 10 a.m. Saturday to cruise along the Shiretoko Peninsula. All were believed to be wearing life jackets.

The vessel crewed by a 54-year-old captain and a 27-year-old deckhand told its operator, Shiretoko Yuransen, it was tilting 30 degrees around 2 p.m. before losing contact, the coast guard said.

On Sunday, a group of people, apparently family members and acquaintances of the passengers, visited a town hall where an emergency headquarters was set up.

A man was heard shouting at the staff, "How are you handling the situation? I need information. Please do something as soon as possible." A 61-year-old man who said he knows the captain of the boat prayed for his safety, saying, "I hope he comes back."

Fishing boats and tourist ships from the area joined the search in the morning, but some returned to port a few hours later because of strong wind.

"I hope they are all rescued, but I couldn't even find anything drifting (at sea)," said a 63-year-old captain of a tourist boat.

The president of the operator apologized to a few dozen people believed to be families and relatives of the passengers Sunday, the mayor of the town said.

The incident occurred while the Kazu I was in waters off Kashuni Falls, a popular scenic site near the tip of the Shiretoko Peninsula around 27 km northeast of the boat's home port. 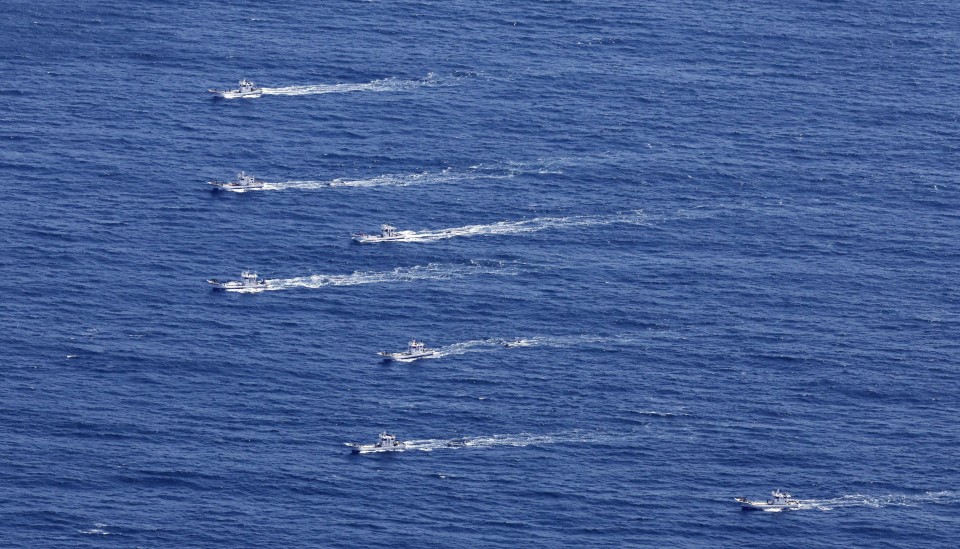 Photo taken on April 24, 2022, from a Kyodo News helicopter shows fishing vessels searching for a tourist boat that went missing with its over 20 passengers and crew the previous day in the Sea of Okhotsk off the Shiretoko Peninsula on the northernmost Japanese main island of Hokkaido. (Kyodo) ==Kyodo

Water temperatures in the area have been around 2 C to 4 C in recent days, and high waves and strong winds were observed around noon Saturday, according to the local fisheries cooperative. Its fishing boats returned to port before noon because of the bad weather, it said.

The Kazu I was the first tourist boat to operate in the area this season. With wind and high surf advisories issued in the area on Saturday, a captain of another tourist boat operator said he advised the Kazu I crew not to leave port.

A local inn operator said the crew "could have decided to come back. They might have tried too hard because it's tourism season."

Japan will soon enter the Golden Week holidays through early May, but local tourist boat companies said they have decided not to operate during the holidays due to the accident.

Ground, Maritime and Air self-defense forces have all dispatched aircraft to help with the search for the passengers and crew, with the MSDF also sending a destroyer.

According to the Ministry of Land, Infrastructure, Transport and Tourism, the Kazu I collided with a floating object in May last year, injuring three passengers.

The boat also ran aground in June in shallow water shortly after leaving port, leading the coast guard to refer the captain, Noriyuki Toyoda, to prosecutors.

The ministry started an on-site inspection of the operator of the boat, while the Japan Transport Safety Board sent officials to a local coast guard office to investigate the incident.

Toyoda worked as an operator of an amphibious vehicle before moving to Shiretoko about two years ago, residents who know him said. While they say he was a hard worker, some were worried about his inexperience.

"I heard he worked at a lake or something" but he does not have the necessary know-how to operate on the sea, one fisherman said. One captain after another left the company recently and Toyoda was swamped with work, according to an employee in the local tourism industry.

Akira Soyama, the deckhand, only started working at the company from this year, a former colleague said.

Yoshihiko Yamada, a professor at Tokai University's School of Marine Science and Technology, said, "They should not have left port. It was a human-made disaster."

"Is the captain a professional? On what grounds did the company give a green light to operate? I have many questions," he said. "They should have had the courage to stop."

The peninsula in the northeast of Hokkaido is known as a popular destination for spotting drift ice and was designated as a World Natural Heritage site in 2005. It is a habitat for many rare species of animals and plants. 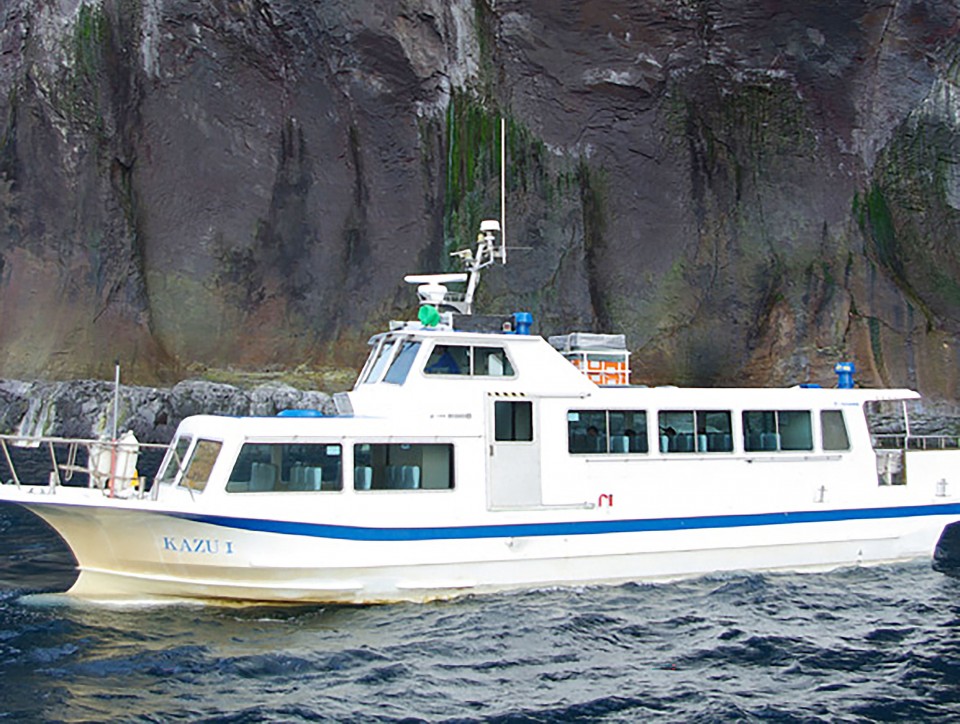 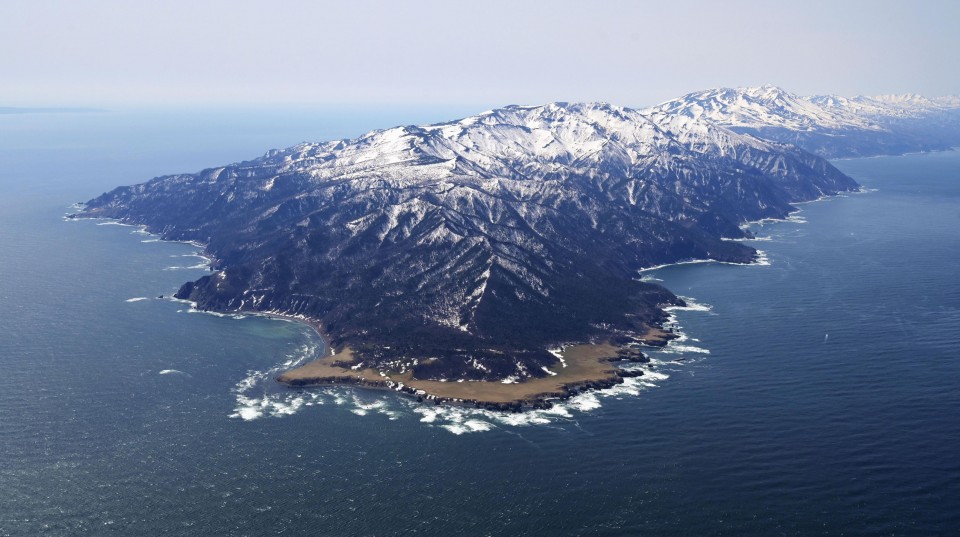 Photo taken on April 24, 2022, from a Kyodo News helicopter shows the Sea of Okhotsk off Shiretoko Peninsula on the northernmost Japanese main island of Hokkaido. Search and rescue operations are under way for a tourist boat that went missing with its over 20 passengers and crew in the area the previous day. (Kyodo) ==Kyodo