Residents in northeastern Japan's Tohoku region were shaken after a powerful earthquake struck the region late Wednesday, bringing back memories of the megaquake that brought death and devastation there just over 11 years earlier.

Tsunami warnings rang out after the earthquake, bringing back memories to many in the area, that includes Miyagi and Fukushima prefectures, of the calamities of March 11, 2011. Then, people were forced to flee to the safety of higher ground as tsunami surges caused destruction along the coast.

On Wednesday night, buildings were damaged as walls and ceilings were shaken, while millions of homes, including some in parts of Tokyo, were left without power as local authorities scrambled to grasp the extent of the damage. 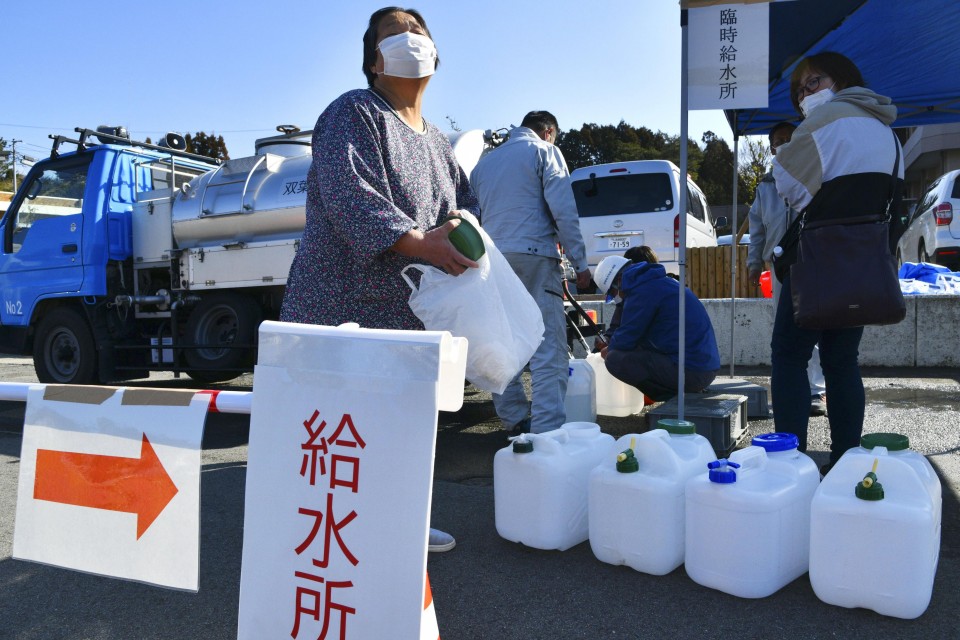 Water is distributed in plastic tanks in the Fukushima Prefecture town of Naraha in northeastern Japan on March 17, 2022, after water supplies in the area were cut following a powerful earthquake the previous night. (Kyodo) ==Kyodo

Akiko Ogai, a 48-year-old woman in Soma, Fukushima Prefecture, left her home by car after the shaking stopped and headed for higher ground, making her revisit the trauma of 11 years ago when her home was swept away by a tsunami.

Later, she and eight family members went to a gymnasium that served as an evacuation center to spend the night.

"As I couldn't sleep well, I'd like to return home after I receive food and water. I'm so glad that the whole family is safe," she said. 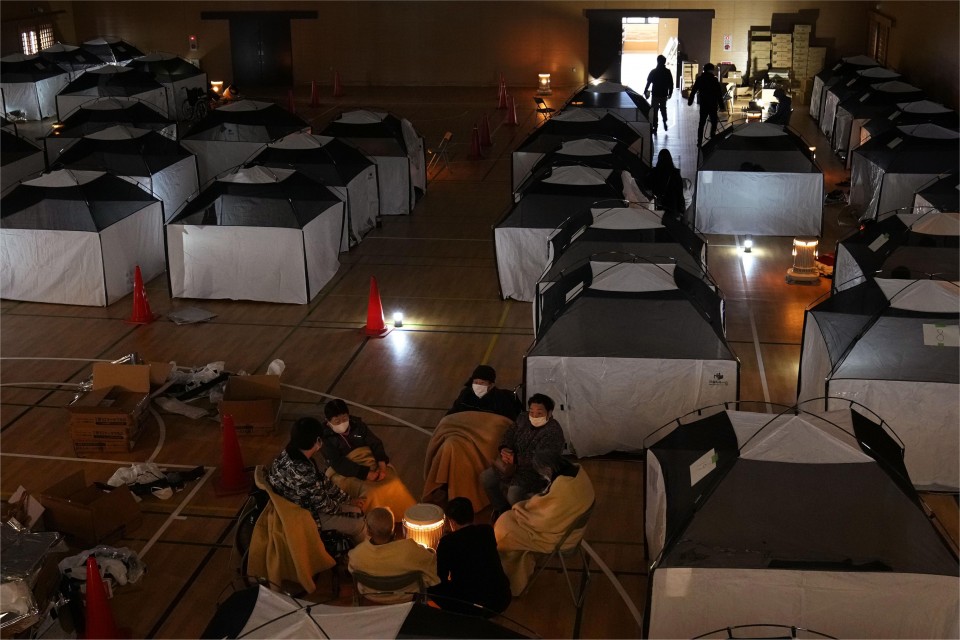 Evacuated people sit near a heater for warmth at a gymnasium in Soma, Fukushima Prefecture, on March 17, 2022, after a powerful earthquake struck northeastern Japan shortly before midnight. (Kyodo)

In Fukushima Prefecture, a blackout hit a city office in Soma, not far from the Fukushima Daiichi nuclear power plant, crippled by the 2011 disaster.

"I felt two big quakes and saw parked cars bouncing up and down because the ground was shaking," a guard at the office said.

The quake struck at around 11:36 p.m., unlike the 2011 disaster, which struck in the afternoon. Traffic signs ceased functioning in front of JR Sendai Station and fire truck and ambulance sirens blared in Sendai. 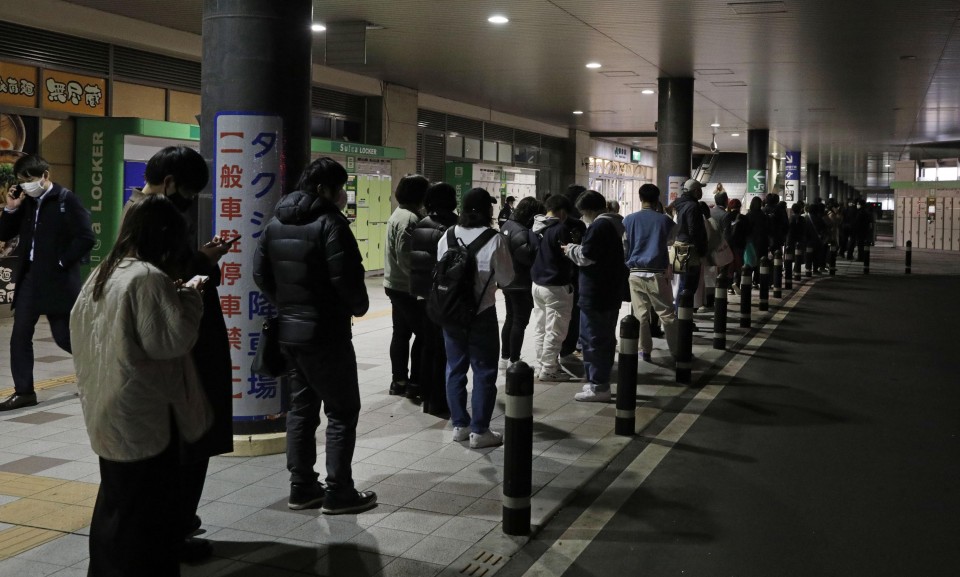 People wait for taxis at JR Sendai Station in Miyagi Prefecture, northeastern Japan, in the early hours of March 17, 2022, after a powerful earthquake hit the region. (Kyodo) ==Kyodo

There were many calls for emergency assistance and rescue services across a wide area of the Tohoku region and the magnitude 7.4 quake left at least two people dead and more than 140 injured.

"The shaking was tremendous," said a 46-year-old woman in Ishinomaki, Miyagi Prefecture. She was at home when the quake hit the area and immediately fled to a nearby junior high school.

In the town of Zao, a piece of the ceiling at a venue used for COVID-19 vaccinations fell due to the quake.

"The tremor was so big that I had to hold a pillar to keep standing up. I recalled the Great East Japan Earthquake 11 years ago," said Zao's 70-year-old Mayor Hideto Murakami.

In Shiroishi, over 70 passengers exited a derailed shinkansen bullet train at around 4:30 a.m., about five hours after the quake. 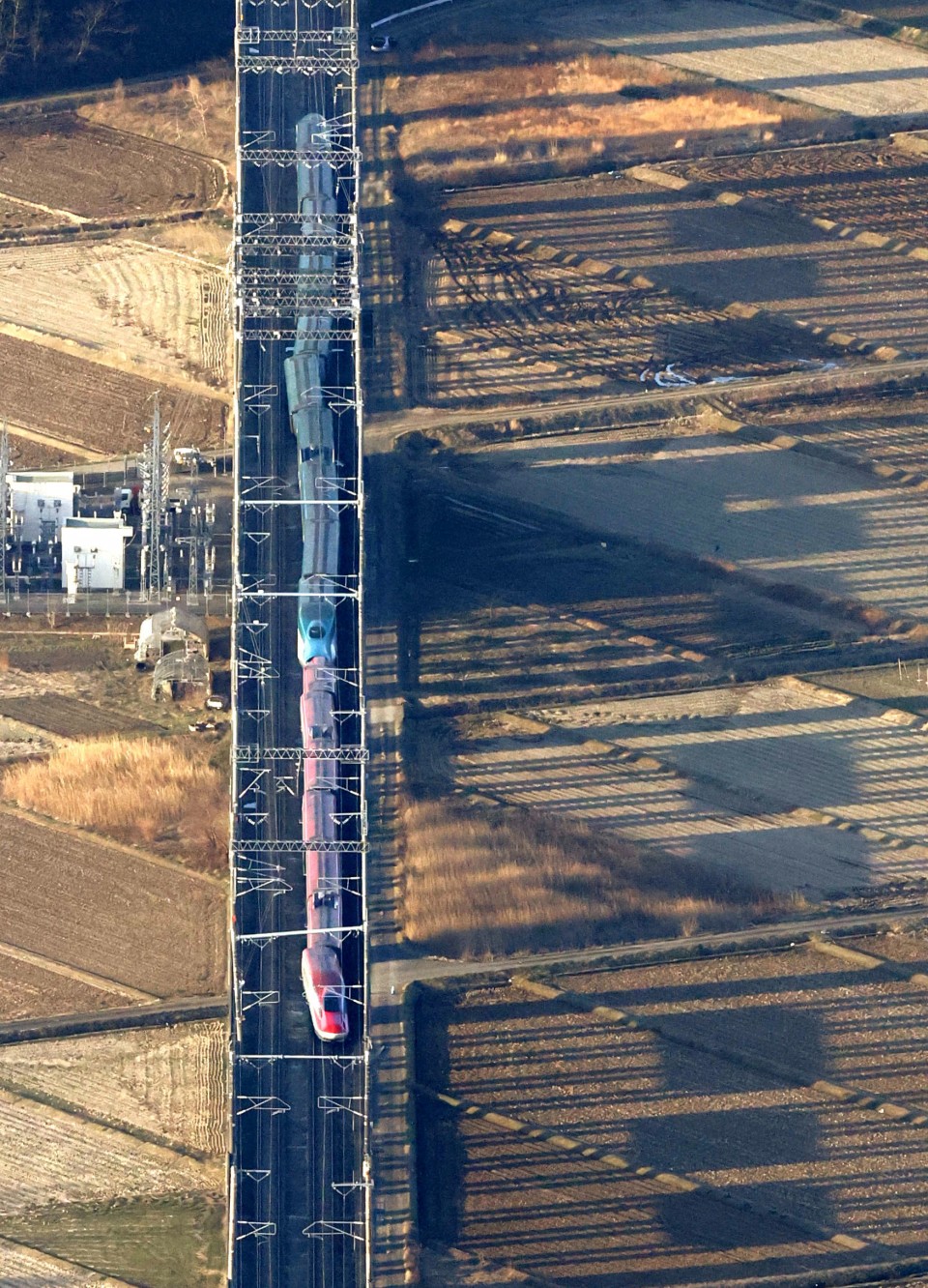 "It was a great shaking that made me feel like I was bouncing," said 37-year-old passenger Akinobu Kanno.

Shoma Kitagawa, 28, said the power went out after the tremor and passengers gathered in one car to ward off the cold. "It was a really long wait," Kitagawa said.

In Tokyo, people lined up to get taxis home as train operations were temporarily suspended. There were reports of people trapped in elevators and train cars.

"I have no idea how I can get to my hotel," said a man who was in Tokyo on a business trip.

A wide area of the fashionable Ginza district, known for its nightlife, was plunged into darkness.

COVID-19 quasi-emergency curbs are in place in the Tokyo metropolitan area, including Chiba, Saitama and Kanagawa prefectures, until Monday to curb infections.

"I told our customers to go home, but I couldn't finish my work because the power was out," said Yoshiki Motomiya, a 43-year-old worker at a Japanese-style izakaya bar in Tokyo.