The 11:36 p.m. quake also prompted the Japan Meteorological Agency to issue a 1-meter tsunami warning to the Pacific coast of Miyagi and Fukushima prefectures, but the warning was lifted Thursday morning after only relatively small tsunami waves were observed. 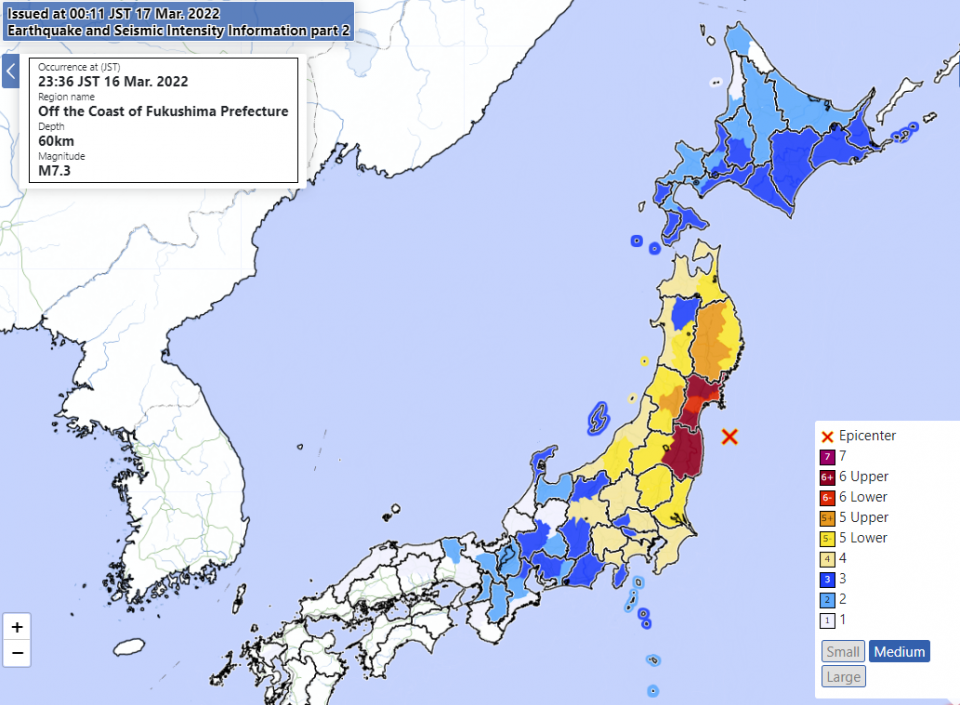 Prime Minister Fumio Kishida told reporters early Thursday that there have so far been no abnormalities found at nuclear plants in affected areas after the big quake.

The temblor, which was preceded by a magnitude 6.1 quake by two minutes, registered an upper 6 on Japan's seismic intensity scale of 7 in parts of Miyagi and Fukushima, the agency said. 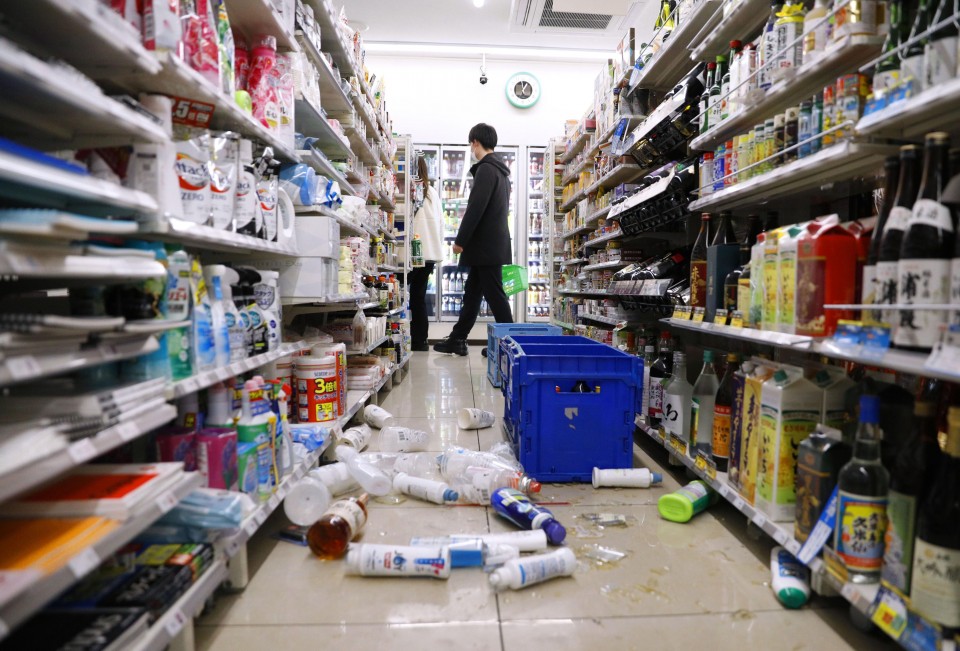 Products are seen scattered on the floor of a convenience store in Sendai in Miyagi Prefecture, northeastern Japan, in the early hours of March 17, 2022, after a strong earthquake shook the area. (Kyodo) ==Kyodo

At an intensity of upper 6, many people find it impossible to remain standing or move without crawling. The jolts are strong enough to toss people through the air, according to the agency.

The M7.4 quake, which occurred in waters off Fukushima at a depth of about 57 kilometers, was also felt across a wide swath of the country, including eastern, central and western Japan. The agency is warning of quakes of a similar scale in hard-hit areas for the next week or so.

A Tohoku Shinkansen bullet train with about 100 passengers on board derailed between Fukushima Station in Fukushima and Shiroishizao Station in Miyagi, but no injuries were reported, according to East Japan Railway Co.

Fire departments in Miyagi and Fukushima received numerous calls requesting an emergency response, with reports of many injured in the coastal city of Soma in Fukushima.

A male resident in Soma died because of the quake, according to the municipal government.

Injuries were reported in not just Miyagi and Fukushima but also Kanagawa, Ibaraki, Iwate, Akita and Yamagata prefectures, a Kyodo News tally showed.

The quake caused power outages in northeastern and eastern Japan, affecting a total of more than 2.2 million households, including about 700,000 in Tokyo, according to TEPCO Power Grid Inc. and Tohoku Electric Power Network Co. Power was later restored to most of them. 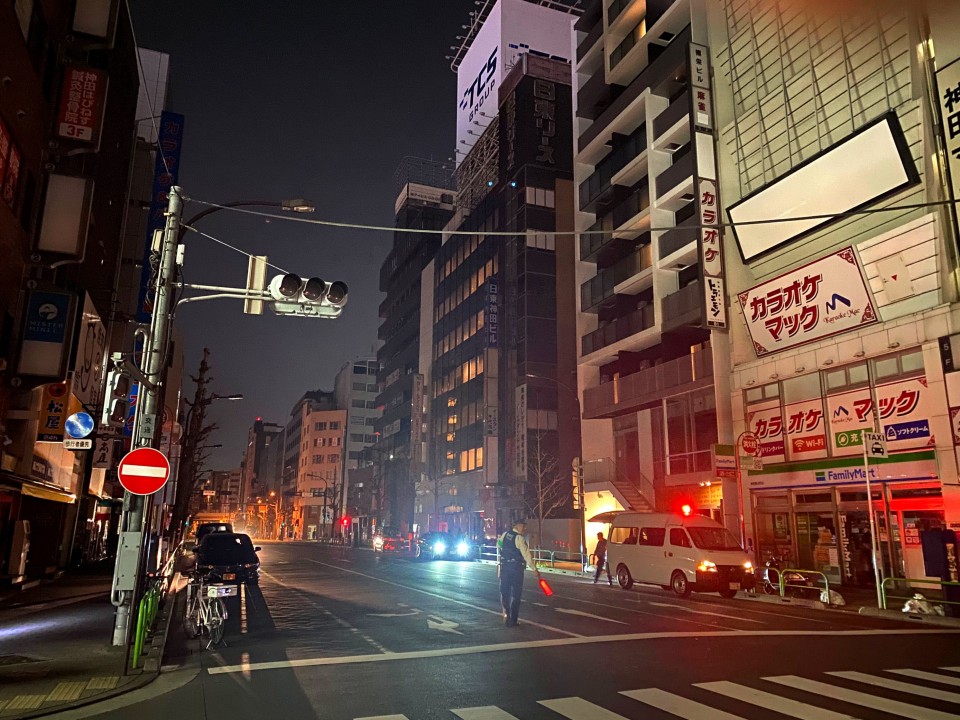 A police officer directs traffic in downtown Tokyo early on March 17, 2022, as the area was hit by a blackout following a powerful earthquake in northeastern Japan. (Kyodo)

After the quake, tsunami waves of up to 30 centimeters were observed in Ishinomaki port in Miyagi, the agency said, urging residents to stay away from the coast.

The country's nuclear regulator said data shows no abnormalities with reactors and facilities at the Fukushima Daiichi nuclear power plant in Fukushima, though a fire alarm went off in the turbine building of the No. 5 reactor.

The seaside plant suffered multiple meltdowns in March 2011 after being hit by a quake-caused tsunami, but the No. 5 reactor went unscathed. 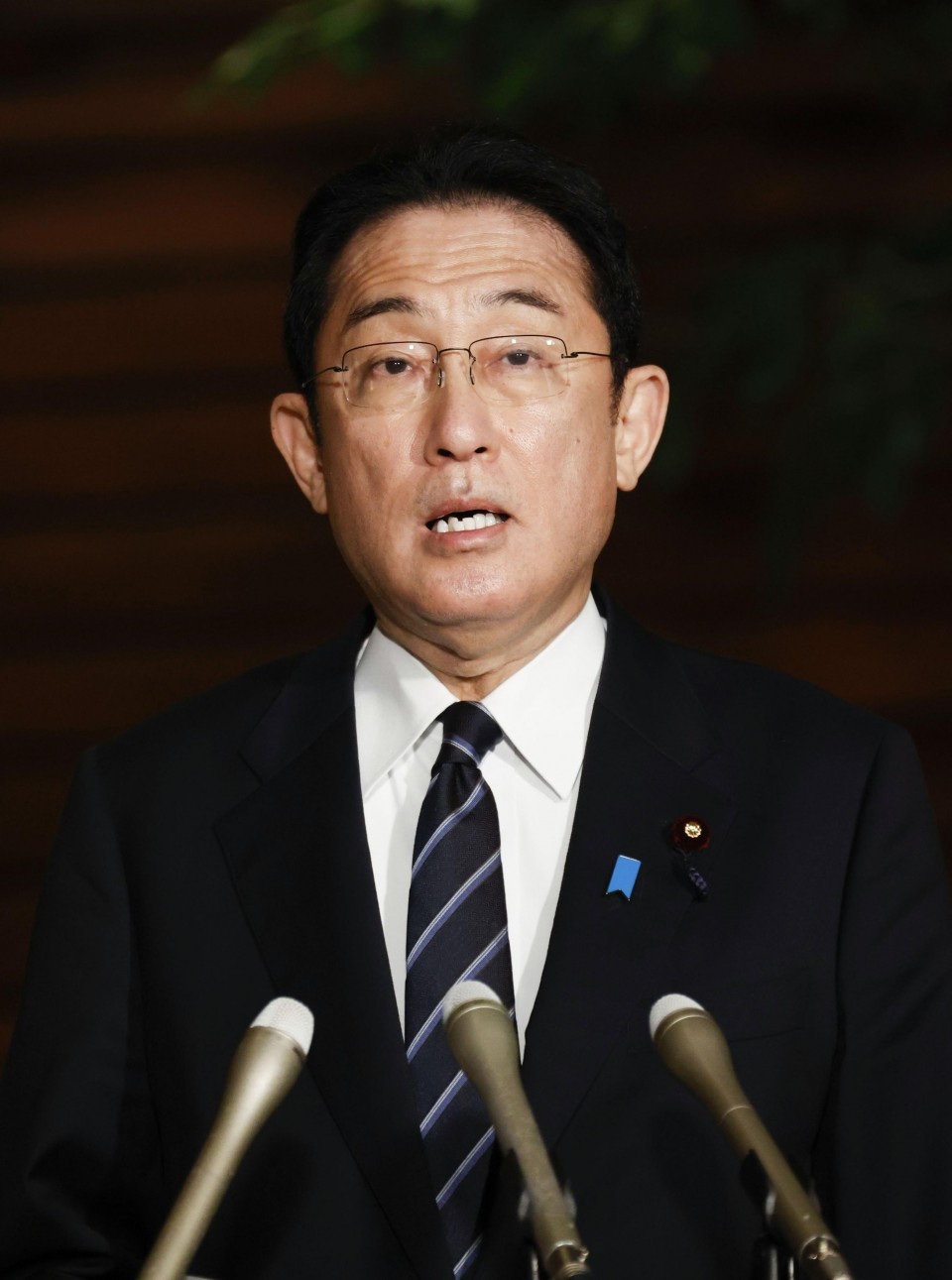 Japanese Prime Minister Fumio Kishida speaks to reporters at the premier's office in Tokyo in the early hours of March 17, 2022, after a powerful earthquake hit northeastern Japan. (Kyodo) ==Kyodo

The government set up an office at the prime minister's office for crisis management. Kishida told reporters that he instructed officials to gather relevant information and make the utmost effort to rescue the injured and respond to those affected by the quake.

The late-night quake left many Japanese, particularly those in northeastern Japan, unsettled as it struck just days after the 11th anniversary of the M9.0 quake that devastated the region.

"I felt two big quakes and saw parked cars bouncing up and down because the ground was shaking," a security guard at Soma City Hall in Fukushima said.

Some of those injured in the quake were carried into Tome Citizen Hospital in Miyagi for treatment. The hospital said the patients reported having cuts on their arms and feet with fragments of broken glass. Soma General Hospital in Fukushima also said many patients are being transported to the hospital.

The quake's magnitude was initially announced as 7.3 but was later updated to 7.4. 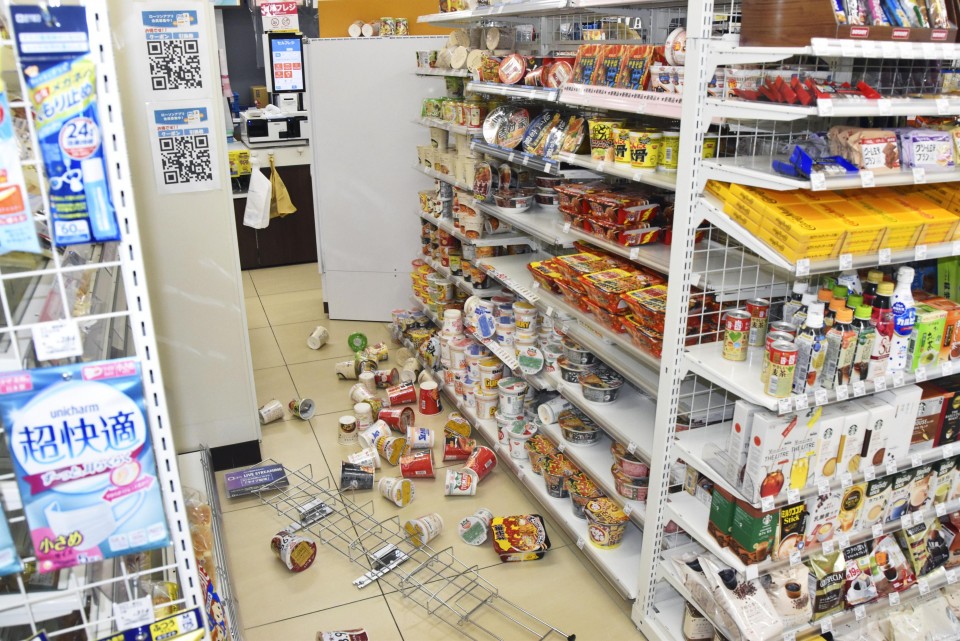 Products are knocked from shelves at a convenience store in the city of Fukushima during a powerful earthquake on March 16, 2022. (Kyodo) 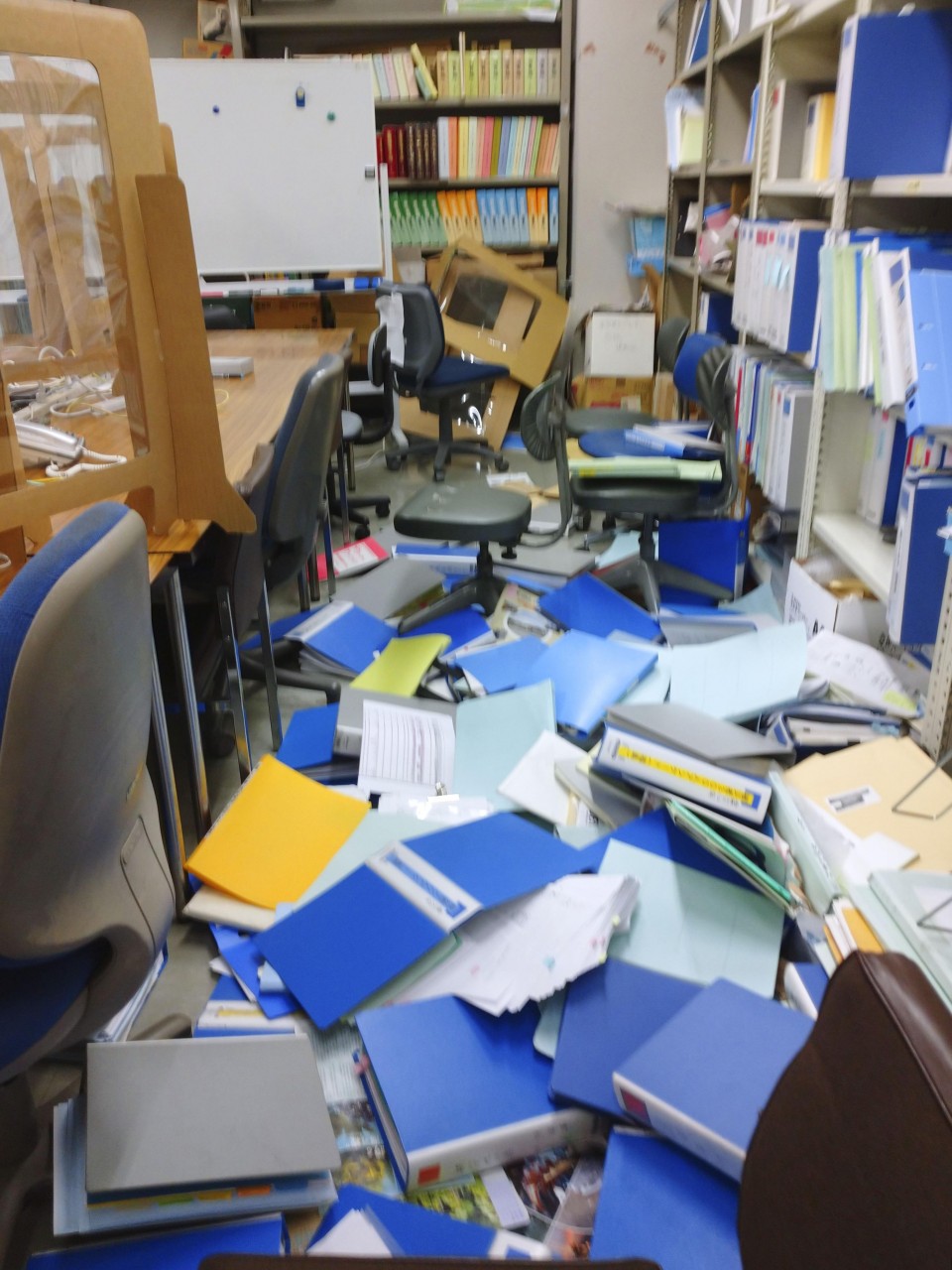 Kyodo News' Sendai bureau in Miyagi Prefecture, northeastern Japan, is pictured after a powerful earthquake hit the region late on March 16, 2022. The Japan Meteorological Agency issued a tsunami warning for the Pacific coast in the region. (Kyodo) ==Kyodo 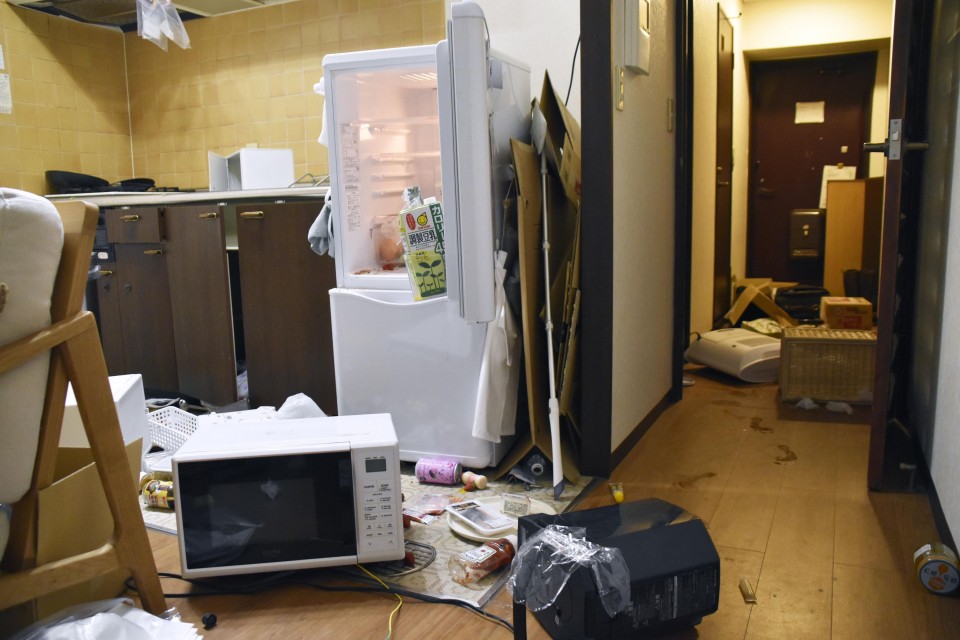 Furniture and home appliances are toppled in an apartment in the city of Fukushima as a powerful earthquake hits northeastern Japan on March 16, 2022. (Kyodo)