Japan on Friday marked the 11th anniversary of the earthquake and tsunami that devastated its northeastern region in 2011, with evacuation orders in more parts of areas contaminated by the Fukushima nuclear crisis expected to be lifted later this year.

The worst natural calamity in the country's postwar history left more than 15,000 dead after the magnitude-9.0 earthquake and ensuing tsunami caused widespread damage and triggered meltdowns at the Fukushima Daiichi nuclear complex. 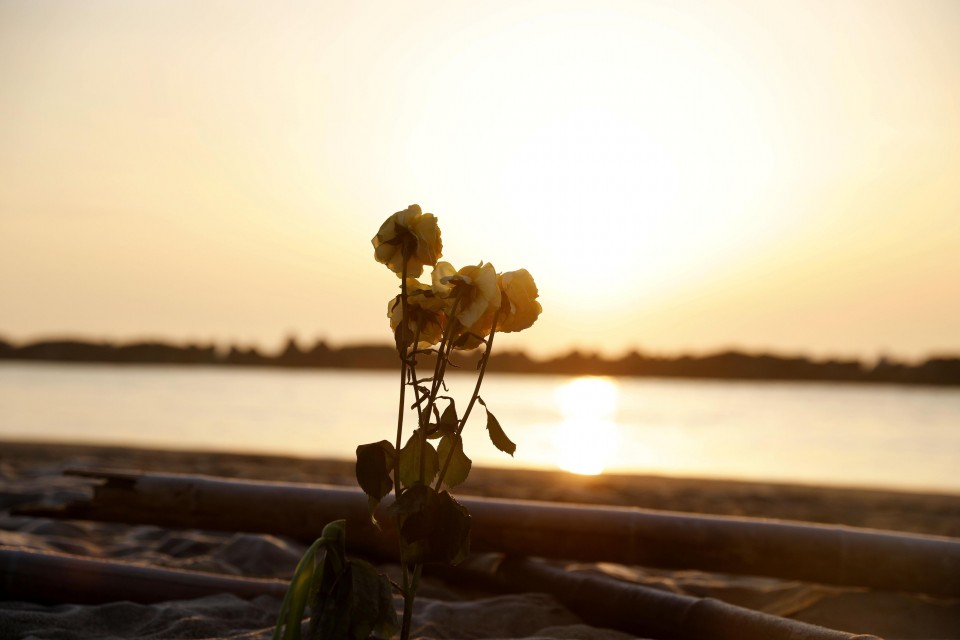 Flowers are placed on a beach in the Arahama district of Sendai in Miyagi Prefecture on March 11, 2022, the 11th anniversary of the earthquake, tsunami and nuclear disaster that devastated the country's northeast. (Kyodo) ==Kyodo

Infrastructure in the hard-hit areas has largely been rebuilt, but some 38,000 people remain displaced due mainly to the world's worst nuclear accident since the 1986 Chernobyl disaster.

Residents in the severely affected prefectures of Fukushima, Iwate and Miyagi observed a moment of silence at 2:46 p.m., when the massive quake struck the region more than a decade ago and prayed for those who lost their lives. 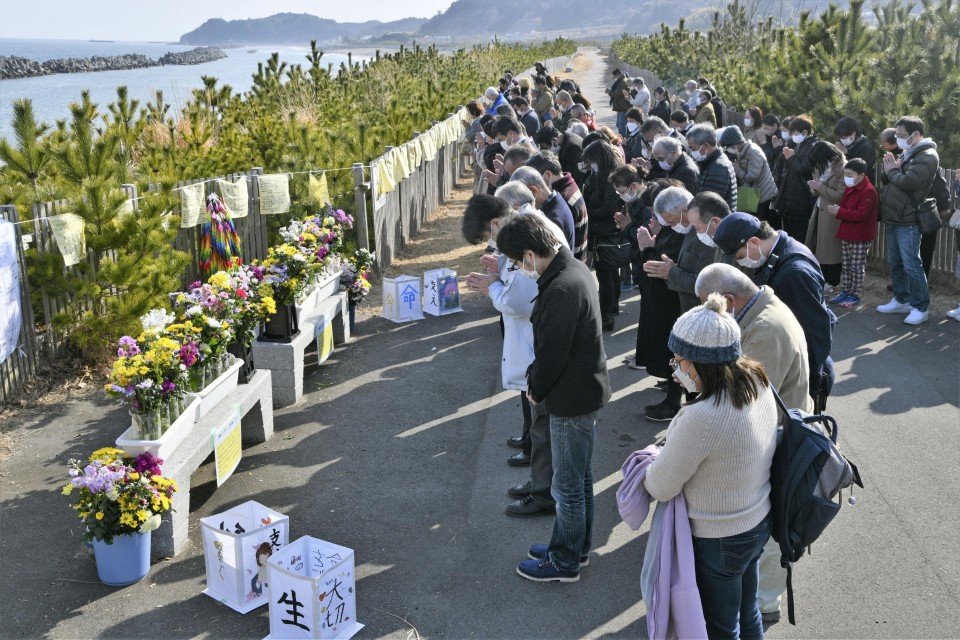 As the central government no longer hosts a memorial service, municipalities in the affected northeastern areas of the Tohoku region held theirs on a smaller scale, with Prime Minister Fumio Kishida attending a ceremony held in the city of Fukushima.

"We will make utmost efforts for the reconstruction of Tohoku," Kishida said in the service attended by around 200 people. "We will promote building of a disaster-resilient nation by constantly reviewing measures to prevent and mitigate disaster damage and protect people's lives." 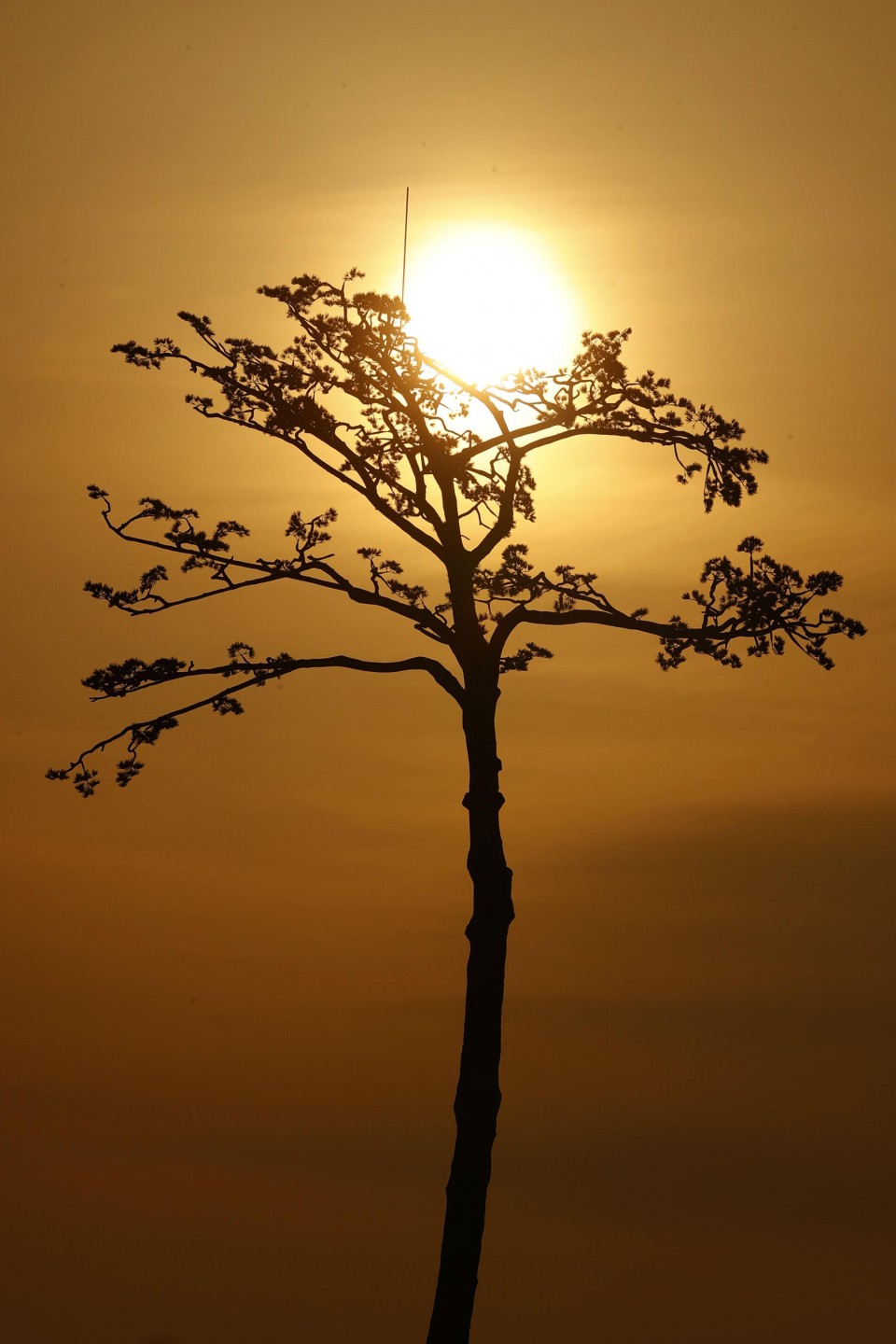 The monument to the "Miracle Pine," the only tree that survived in a coastal forest flattened by the deadly tsunami in March 2011 in northeastern Japan is pictured in Rikuzentakata, Iwate Prefecture, on March 11, 2022, the 11th anniversary of the earthquake, tsunami and nuclear disaster that devastated the country's northeast. (Kyodo) ==Kyodo

According to the latest data from the National Police Agency, the death toll stands at 15,900 and 2,523 people remain unaccounted for, mostly in the three severely devastated prefectures. Related deaths, such as those caused by illness or stress-induced suicides linked to the disaster, totaled 3,784 as of September last year, according to the Reconstruction Agency.

"We have renewed our resolve to stay committed to a bottom-up approach," Reconstruction Minister Kosaburo Nishime told reporters in Tokyo. "We will work together with the determination that there will be no revival of Japan without the reconstruction of Tohoku."

There is still a no-go zone near the Fukushima plant where decommissioning work is scheduled to continue until sometime between 2041 and 2051.

Fukushima Prefecture continues to struggle with the aftermath of nuclear contamination as radioactive water from cooling crippled reactors containing melted nuclear fuel builds up. The government's release of treated water into the sea is slated to begin in the spring of 2023, causing concerns in neighboring countries as well as among local residents.

Evacuation orders in Fukushima are scheduled to be lifted this spring in parts of areas currently designated as off-limits due to radiation, but whether residents will return remains uncertain.

In Futaba where all residents were ordered to evacuate, some have started staying overnight at their homes before the evacuation order is lifted around June. 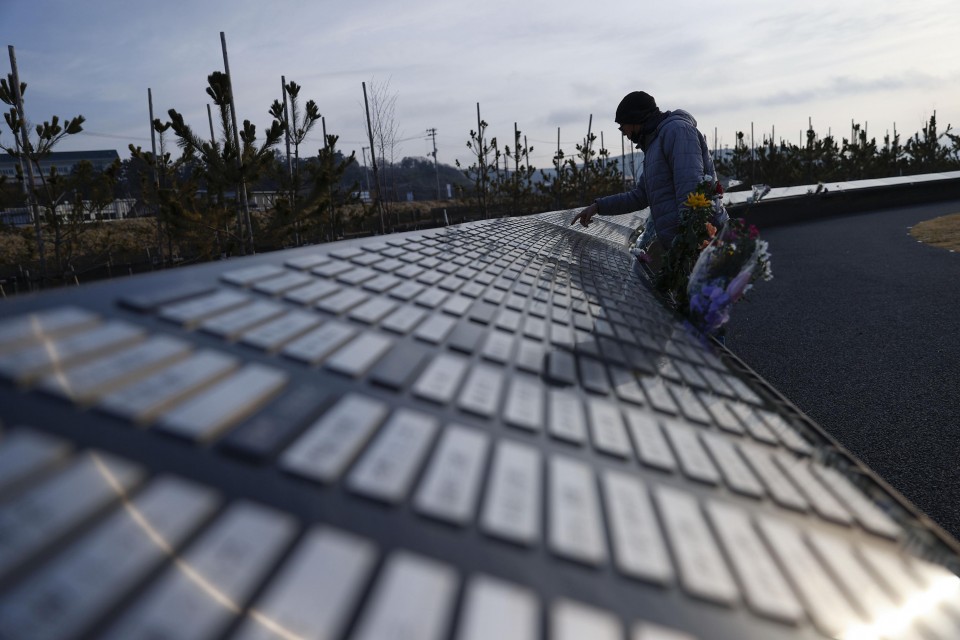 A man looks for the name of an acquaintance at a cenotaph that lists the names of the 3,695 people who were killed in the 2011 earthquake-tsunami disaster at the Ishinomaki Minamihama Tsunami Memorial Park in the Miyagi Prefecture city of Ishinomaki, northeastern Japan, on March 11, 2022. (Kyodo) ==Kyodo

"I feel disappointed as people are not returning here," said 77-year-old Yasushi Hosozawa, who was staying at his home in the town. "So much for the recovery, even after 11 years."

In Rikuzentakata in Iwate which was devastated by a tsunami, bereaved families paid a visit to a stone monument which was unveiled to the public with the names of 1,709 victims.

At the site where the town office of Otsuchi in Iwate was built, bereaved families and town officials offered flowers to pray for 40 victims, who included the mayor at the time and many officials.

"My mission is to pass the lesson of losing precious lives on to the next generation," said Mayor Kozo Hirano.

Meanwhile, police in the disaster-hit region conducted searches of coastal areas in Fukushima and Iwate prefectures for any sign of the remains of those swept away by the tsunami. 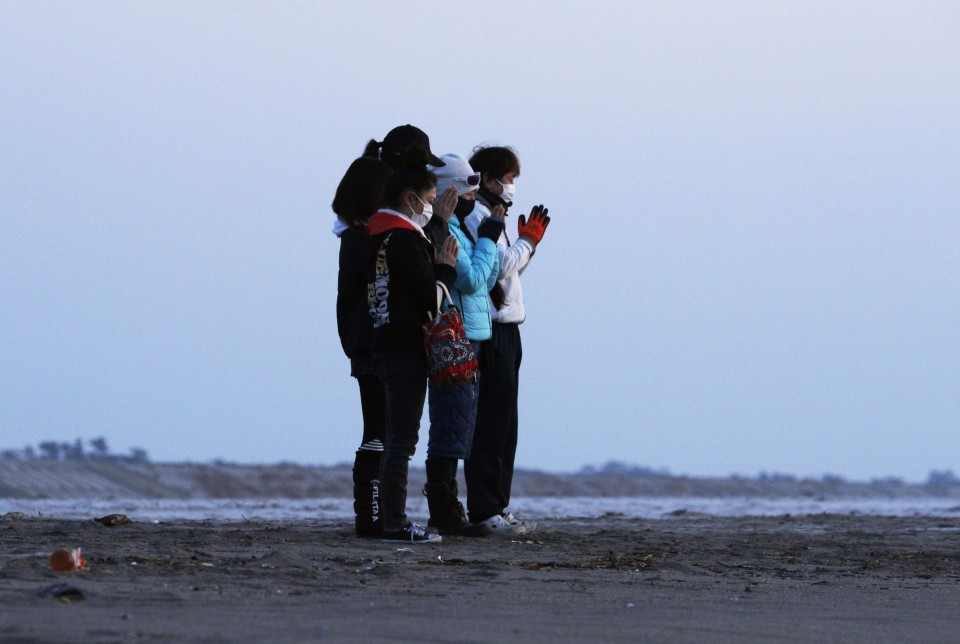 People pray on a beach in the Arahama district of Sendai in Miyagi Prefecture on March 11, 2022, the 11th anniversary of the earthquake, tsunami and nuclear disaster that devastated the country's northeast. (Kyodo) ==Kyodo 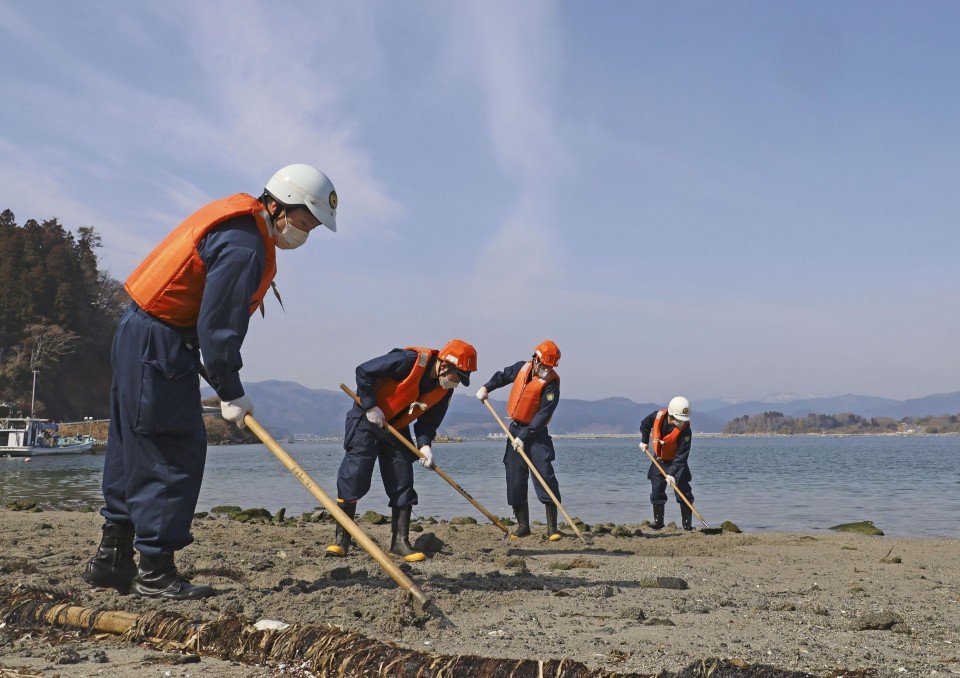 Police officers search for clues about the fates of people still listed as missing in the Iwate Prefecture city of Rikuzentakata, on March 11, 2022, the 11th anniversary of the earthquake, tsunami and nuclear disaster that devastated the country's northeast. (Kyodo) ==Kyodo 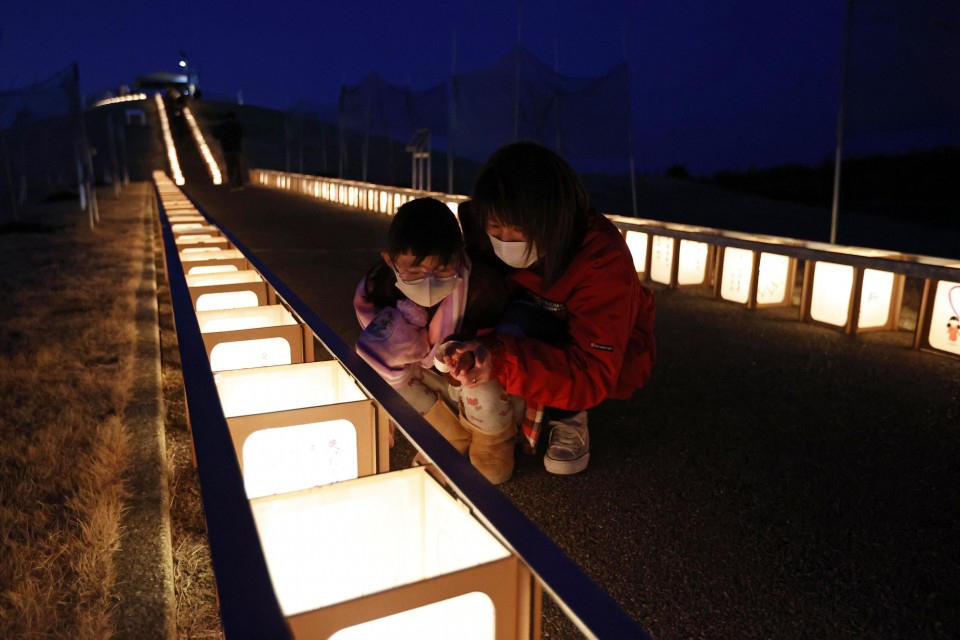 About 600 lanterns are lit at a memorial event in Iwanuma, a Miyagi Prefecture city hard hit by the March 2011 earthquake-tsunami disaster, on March 10, 2022, on the eve of its 11th anniversary. (Kyodo) ==Kyodo