U.S. National Security Adviser Jake Sullivan warned during talks with top Chinese diplomat Yang Jiechi on Monday that Beijing will face "consequences" if it provides Russia with military and other assistance over its invasion of Ukraine, U.S. officials said.

The meeting, which took place in Rome, was "intense" and lasted for seven hours, a senior U.S. official who spoke on condition of anonymity said, adding Sullivan also raised such issues as North Korea's provocative missile tests and Beijing's pressure on Taiwan.

No major agreements were announced following the talks. The official said the meeting was "not about negotiating any specific issues or outcomes" but about "a candid direct exchange of views." 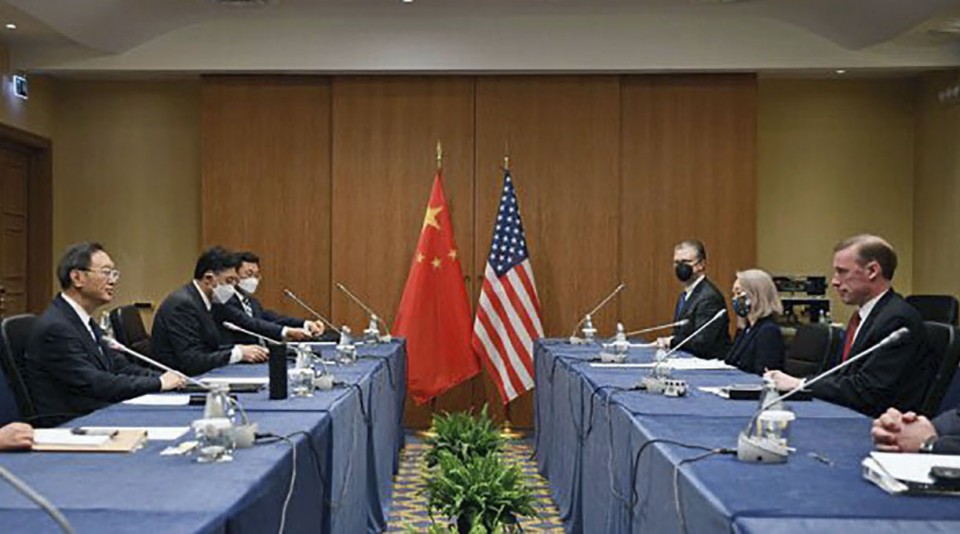 Concern has been growing inside the U.S. government about China's alignment with Russia, as the war in Ukraine has entered its third week and Moscow is facing severe economic sanctions imposed by the West that have raised the possibility of a Russian debt default.

"I think what we have conveyed -- and what was conveyed by our national security adviser in this meeting -- is that should they provide military or other assistance that of course violates sanctions or supports the war effort, that there will be significant consequences," White House Press Secretary Jen Psaki said.

State Department spokesman Ned Price told a separate press conference that the U.S. delegation "raised directly and very clearly" its concerns about China's support for Russia in the wake of the invasion.

The U.S. delegation also noted "the implications that any such support would have" for China's relationship not only with the United States but Washington's allies and partners in Europe and in the Indo-Pacific, Price said.

According to some media, the United States determined that China had signaled to Russia that it would be willing to provide both military support for the campaign in Ukraine and financial backing to help cushion the impact of the Western sanctions.

The assessment had reportedly been relayed to Western and Asian allies and partners earlier Monday.

China's state-run Xinhua News Agency reported Yang said in the meeting that Beijing strongly opposes "any words and deeds that spread false information" or "distort and discredit" its position.

Yang was also quoted as saying, "China always stands for respecting the sovereignty and territorial integrity of all countries," while suggesting that Russia's security concerns need to be heard.

Sullivan and Yang met in person for the first time since October, when they held talks in Switzerland. Their engagement followed up on a virtual meeting between U.S. President Joe Biden and his Chinese counterpart Xi Jinping in November, according to the U.S. and Chinese governments.

The White House said in a press release that the Rome meeting underscored the importance of maintaining open lines of communication between the United States and China amid their growing military and economic rivalry.

Sullivan underscored concerns about China's "provocative" actions toward Taiwan, a self-ruled island that Beijing views as its own. He also noted "recent escalatory actions" by Pyongyang that has been advancing its weapons programs, according to the senior U.S. official, apparently referring to recent intercontinental ballistic missile system tests.

"The national security adviser was clear...not only about those concerns (on North Korea), but also about the steps that we believe are necessary in this moment and the work that we hope to be able to engage with China on," the official said, apparently taking into consideration that Beijing is Pyongyang's most important ally and economic benefactor.

But whether the latest talks will lead China to change its stance on key issues remains unclear.

Russia launched a military attack on Ukraine on Feb. 24 after asserting that its own security was under threat from the potential expansion of the North Atlantic Treaty Organization and the possibility of Kyiv joining the alliance.

Earlier in February, China and Russia declared that their friendship has "no limits" in a joint statement issued after a meeting between Xi and Russian President Vladimir Putin.

In the statement, China expressed support for Russia's opposition to the further enlargement of NATO, while Moscow affirmed Taiwan is an "inalienable part" of the Asian country.

When the U.N. General Assembly adopted a nonbinding resolution censuring Russia earlier in March, China was among the 35 countries that abstained from voting.

No progress made in Russia-Ukraine top diplomats' cease-fire talks