The United States, Japan and other Group of Seven industrialized nations on Friday agreed to take steps to strip Russia of trade benefits it has enjoyed as a member of the World Trade Organization, ratcheting up pressure on Moscow following its invasion of Ukraine.

Ending benefits such as low tariffs and few trade barriers in unison with other nations that make up half of the global economy will be another "crushing blow to the Russian economy," U.S. President Joe Biden said at the White House as he announced a fresh set of sanctions the G-7 leaders have agreed on.

According to a joint statement, each member of the group -- Britain, Canada, France, Germany, Italy, Japan and the United States, plus the European Union -- vowed to take independent actions to revoke Russia's "most-favored nation" status, which has granted the country the best possible trade terms on key products. 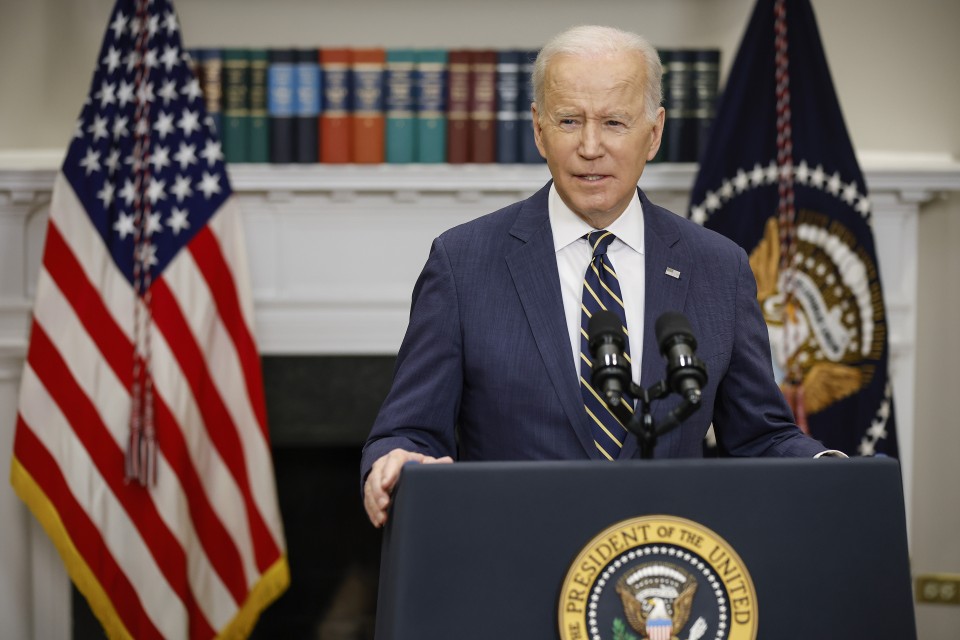 U.S. President Joe Biden announces new economic actions against Russia over its invation of Ukraine at the White House on March 11, 2022 in Washington. (Getty/Kyodo)

The G-7 members also said they are working to collectively prevent Russia from obtaining financing from leading multilateral financial institutions, such as the International Monetary Fund and the World Bank, and stand ready to impose further restrictions on Russia's exports and imports of key goods and technologies.

The latest punishment will build on what the G-7 calls "expansive restrictive measures that have severely compromised Russia's economy and financial system," which have been taken since Russia launched its military attack on Ukraine on Feb. 24.

The G-7 has worked to isolate key Russian banks from a major international payment system known as SWIFT, blunt the Russian central bank's ability to use its foreign reserves to halt its currency's depreciation, and impose export bans and controls to cut Russia off from advanced technologies.

Russia's ruble has been plummeting and its government credit rating has been downgraded to "junk" status, while many foreign companies, including McDonald's Corp. and Fast Retailing Co., operator of the Uniqlo casual clothing chain, are pausing operations in Russia amid global condemnation of the military aggression.

Biden unveiled on Friday a ban on the export of luxury goods to any person located in Russia, such as high-end watches and apparel, and a ban on the import of goods from several signature sectors of Russia's economy, such as seafood, vodka and diamonds.

The U.S. export value of the products covered by the luxury goods restrictions is nearly $550 million per year, while the import ban will deny Russia more than $1 billion in export revenues, the White House said.

As concerns grow over supply disruptions stemming from the invasion, the G-7 said they will work to preserve the stability of energy markets as well as ensure food security globally.

Russia is one the world's largest oil producers, while Russia and Ukraine are among the most important producers of agricultural commodities, supplying a total of about 30 percent of the world's total wheat exports.

The G-7 members said they will make further efforts to reduce their reliance on Russian energy, while ensuring the process happens "in an orderly fashion and in ways that provide time for the world to secure alternative and sustainable supplies."

The United States has already announced a ban on oil and other energy imports from Russia, and Britain also plans to phase out imports of Russian oil by the end of the year.

"We continue to stand with the Ukrainian people and the government of Ukraine. We will continue to evaluate the impacts of our measures, including on third countries, and are prepared to take further measures to hold (Russian) President (Vladimir) Putin and his regime accountable for his attack on Ukraine," the G-7 said in the statement.

For the United States, Russia is the 26th-largest goods trading partner, with $28 billion in total goods trade during 2019, according to the Office of the U.S. Trade Representative.

Under WTO agreements, countries cannot normally discriminate between their trading partners. Granting a special favor, such as reduced tariffs on imported goods, would obligate the country to do the same for all other WTO members.

Revoking Russia's "most-favored nation" status, also called "permanent normal trade relations," would put the country in the same category as North Korea and Cuba in terms of trade relations with the United States.