Many people living in Kyiv are choosing to stay in the city and refusing to yield to Russian threats, though the increased shelling of civilian targets has forced a significant number of residents to flee as Moscow's troops close in on the capital, says a Ukrainian journalist.

"I am at home, and I can hear explosions frequently," says freelance journalist Tetiana Druzhenko, 28, in a recent email interview with Kyodo News. 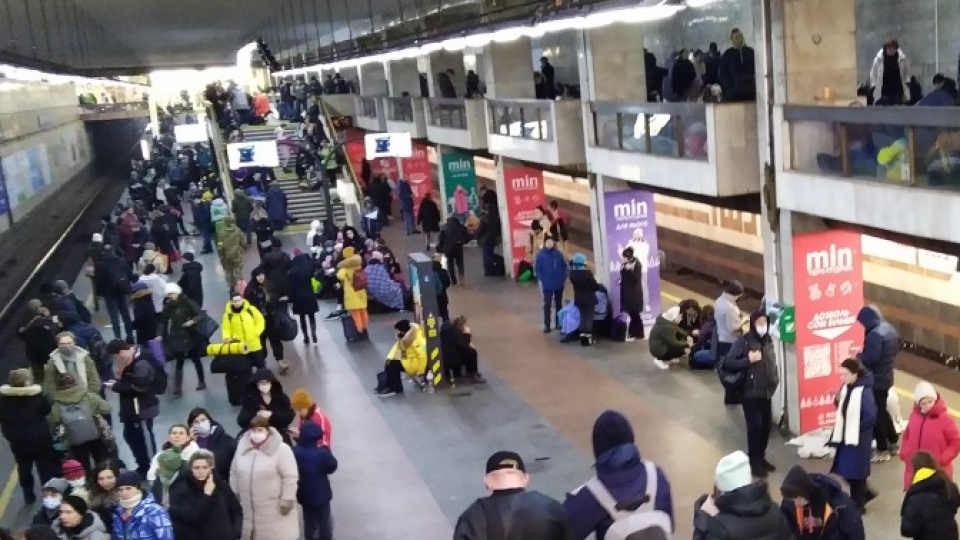 Photo taken in February 2022 shows people waiting for a train at subway station in Kyiv. Services are partially operational as people take refuge in subway stations around the city from shelling by Russian forces after Moscow invaded Ukraine on Feb. 24, 2022. (Photo courtesy of Tetiana Druzhenko)(Kyodo)

While missile strikes have destroyed infrastructure in some parts of the capital, other areas still have central heating, running water and intermittent internet connectivity, she says.

Druzhenko lives in the Darnytskyi district in the southeast of Kyiv. She says that while Russian forces have not yet been able to capture the city, the nearby towns of Irpin, Hostomel and Bucha, some 30 kilometers from her location, have been badly hit, and the Russian military's advance has resulted in dozens of civilian deaths.

"They've died in collapsed buildings or got shot by Russian invaders," she said. "Every day, we get information about new deaths."

But despite the constant threat, Druzhenko says that the remaining residents in the city are calm. "There is no panic in Kyiv. People on the streets are disciplined and try to help each other. Some drugstores and shops are open."

In supermarkets, perishable items like meat, fish and dairy are not available, but a local bread company provides free bread to people taking refuge inside metro stations, Druzhenko said.

Since the invasion began, Druzhenko has spent the time between her home and underground shelters. "We've spent one especially frightening night in a cellar under the local school. We've heard roars of weapons and explosions frequently."

Druzhenko believes that around half of Kyiv's population of roughly 3 million has already left the city. 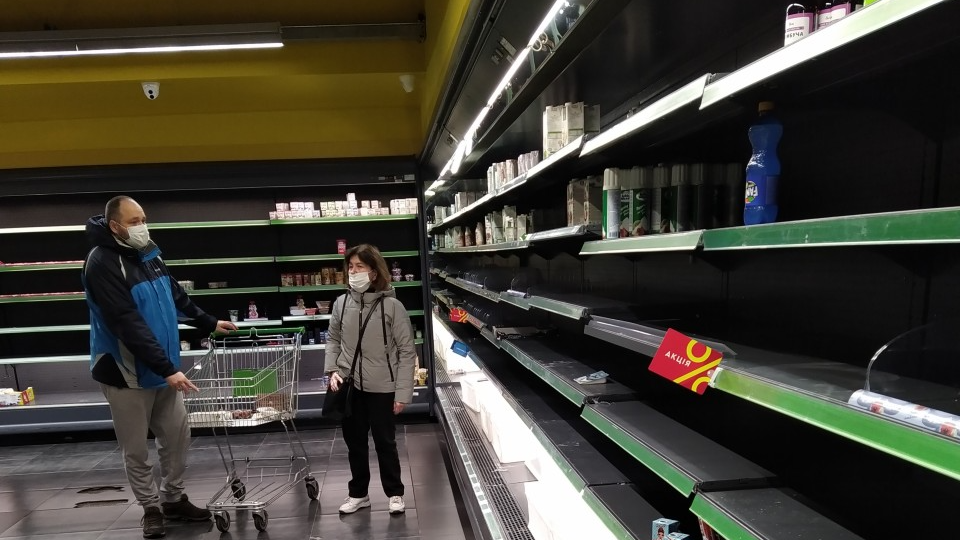 Photo taken in February 2022 shows a couple among empty shelves in the dairy section of a supermarket in Kyiv. Perishable items like meat, fish and dairy products have become scare since Russia's invasion of Ukraine on Feb, 24. 2022. (Photo courtesy of Tetiana Druzhenko)(Kyodo)

Among the evacuees is Tetiana Polyvana, 37, who fled to the west by car with her husband and 10-year old son after a house in her neighborhood was destroyed.

"Frankly, I was not prepared at all," Polyvana said of the invasion. "I could not believe it is possible in the center of Europe in the 21st century."

Polyvana was forced to leave behind her 64-year-old father, immobile after suffering a stroke, and her 63-year-old mother, who is with him. Polyvana says that her parents frequently hear the sounds of sirens and explosions in Kyiv.

But Polyvana says she will stay in Ukraine for as long as she can. "We are on our land, we did not invade anyone, and we need to fight till the end for the future of our kids."

Kateryna Ruskykh, 37, also fled Kyiv to a town in the west with her husband and 6-year old son but is wary of leaving Ukraine and worries for her parents, who remain in the north of the country.

"I want to remain here, to live my life in Ukraine," Ruskykh said. "But if I see that the situation is becoming more dangerous for my son, I will reconsider this."

On Japan's response to the crisis, Druzhenko said, "We appreciate the Japanese strong position, sanctions on Russia and financial help for Ukraine."

Working as a freelance journalist, Druzhenko has written for the Ukrainian daily newspaper "Holos Ukrayiny" about recent anti-war protests on the streets of Tokyo.

But as Russia's aggression continues to intensify, Druzhenko says strong political decisions are needed, particularly the enforcement of a no-fly zone over Ukraine.

"If NATO change their decision and close the sky over Ukraine, nuclear power plants and major cities will be protected from missile attacks," she said.

The civilian death toll has continued to rise, with the majority of casualties occurring due to airstrikes. The Office of the U.N. High Commissioner for Human Rights officially reported 549 deaths from the conflict on Thursday, although the actual figure is thought to be higher.

"We need the sky closed over Ukraine," Druzhenko said.

Despite repeated calls by Ukrainian President Volodymyr Zelenskyy for a NATO-led no-fly zone over Ukraine, the U.S. administration has ruled out the idea that would require NATO to destroy Russian military planes and air defense against the Western alliance's aircraft and raise the risk of bringing Washington and U.S. allies closer to direct conflict with Russia.