North Korea fired a new type of intercontinental ballistic missile on Thursday, Japan's Defense Ministry said, making it the biggest-scale launch in terms of flight time and altitude at a time when international attention is focused on Russia's invasion of Ukraine.

The ICBM fell within Japan's exclusive economic zone in the Sea of Japan about 150 kilometers west of the Oshima Peninsula on the country's northernmost main island of Hokkaido. A government official said it landed possibly closest-ever to the Japanese archipelago for a North Korean missile.

The government also indicated that the missile, apparently launched at a steep angle this time, is assessed to have the capability to travel 12,000 km and reach the U.S. East Coast, including the capital Washington, if it takes a normal trajectory. 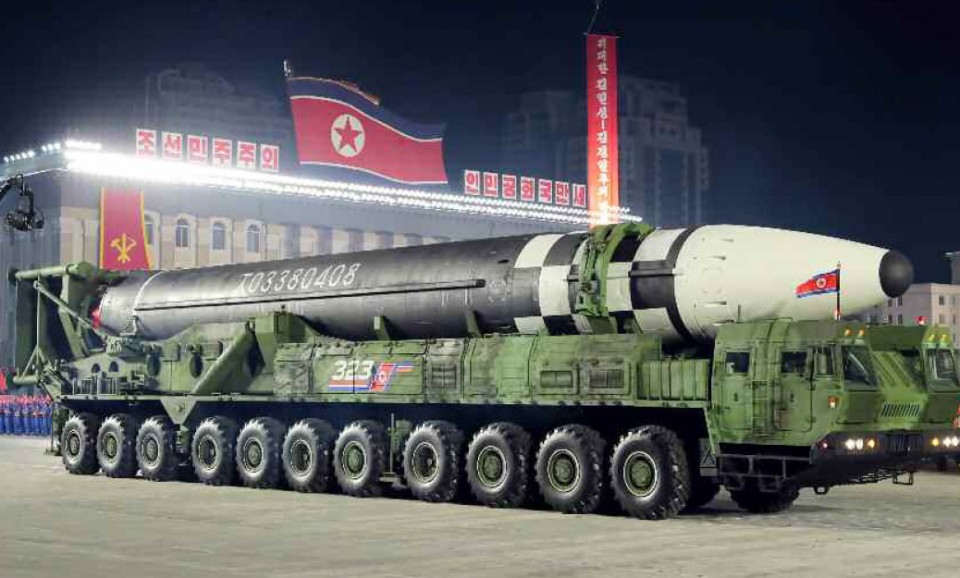 The new ICBM was fired from the Sunan area in Pyongyang at 2:33 p.m. and fell at 3:44 p.m. in the waters after flying about 1,100 km in range and reaching an altitude of 6,200 km during its 71-minute flight, according to the Japanese and South Korean governments.

Thursday's firing was the first ICBM launch by the North since November 2017 and marked an end to its self-imposed moratorium on ICBM launches since April 2018. Pyongyang had suggested in recent months that it may resume nuclear and ICBM tests.

Kishida, on a visit to Brussels for a summit of the Group of Seven industrialized nations, said he wants to confirm coordination among the members in responding to North Korea's repeated ballistic missile launches, which are in violation of U.N. Security Council resolutions.

Foreign Minister Yoshimasa Hayashi and U.S. Secretary of State Antony Blinken agreed that Pyongyang's firing was a "clear and serious challenge" to the international community, the minister told reporters after speaking with his counterpart by phone.

They also vowed to work closely and strengthen the Japan-U.S. security alliance's deterrent and response capabilities, Hayashi said. The two countries will work to keep North Korea from believing that "an opportunity to escalate its provocative actions has come" while the world is focused on Russia's aggression on Ukraine, he added.

The estimated flight time and altitude at its highest point attained by Thursday's ICBM makes it the longest and highest a North Korean missile has flown, according to a Defense Ministry official. An ICBM launched by Pyongyang in November 2017 flew 53 minutes and reached an altitude of over 4,000 km.

There were no reports of damage to aircraft or vessels within Japan due to the latest missile launch.

A North Korean projectile last dropped in Japan's EEZ in September last year, according to the Defense Ministry. North Korea flew ballistic missiles over Hokkaido in 2017.

The United States said Thursday that it "strongly condemns" the North Korean test-firing of a long-range ballistic missile, calling it a "brazen violation" of multiple Security Council resolutions.

The action posed "threats to the Korean Peninsula and the international society, while clearly violating U.N. Security Council resolutions," the presidential office quoted the president as saying in a statement.

"The president seriously urged North Korea to immediately halt actions that create tension and return to the path of diplomatic settlement through conversations as soon as possible," the office added.

South Korea's military fired missiles from 4:25 p.m. to demonstrate Seoul's readiness to respond to the North's move, according to the Joint Chiefs of Staff.

A Japanese government official offered an assessment in a meeting with ruling party lawmakers after the North's ICBM test-firing that the new missile has the ability to reach the East Coast of the U.S. mainland if launched at a different angle, a participant said.

China, meanwhile, stressed the need for dialogue in pursuing peace and stability on the Korean Peninsula. Beijing is Pyongyang's closest and most influential ally in security and economic terms.

"All parties concerned" should "focus on the overall situation of peace and stability on the peninsula" and "work together to advance the process of political settlement" of the issue, Foreign Ministry spokesman Wang Wenbin told reporters in Beijing.

China, one of the five permanent members of the U.N. Security Council, agreed to strengthen sanctions on North Korea after it launched what it said was its "most powerful" ICBM in November 2017, following its sixth nuclear test in September that year.

North Korea has conducted a flurry of ballistic missile tests since the beginning of this year. On March 16, Pyongyang appears to have conducted an unsuccessful ICBM launch from the same Sunan area, with the projectile exploding soon after liftoff.

In January, the North had hinted it could resume nuclear and ICBM tests for the first time since 2017, saying it may restart all "activities" it had temporarily suspended to build trust with former U.S. President Donald Trump.

The missile launch also came as Japan, the United States and South Korea are bracing for increased missile activity by North Korea ahead of a key anniversary on April 15, when the country marks the 110th anniversary of the birth of Kim Il Sung, its founder and the grandfather of current leader Kim Jong Un.

North Korea appears to have failed in ballistic missile test

Big manufacturers' sentiment falls to 9 from 14 in June: Bank of Japan