Over the past year, the U.S. administration of President Joe Biden has made clear its pivot to the Indo-Pacific region, singling out China as the "only competitor" potentially able to mount a sustained challenge to a stable and open international system.

But Russia's invasion of Ukraine on Thursday has underscored that the United States does not have the luxury of dealing only with the China challenge, while possibly complicating Biden's Indo-Pacific strategy that views Europe's engagement as a key part of the "collective capacity" Washington seeks to build in pushing back against Beijing.

"The United States can't simply return to its previous business of focusing predominantly on China," Andrea Kendall-Taylor, an expert on security issues at the Center for a New American Security, told a recent congressional hearing as she spoke about the impact of the Ukraine crisis. 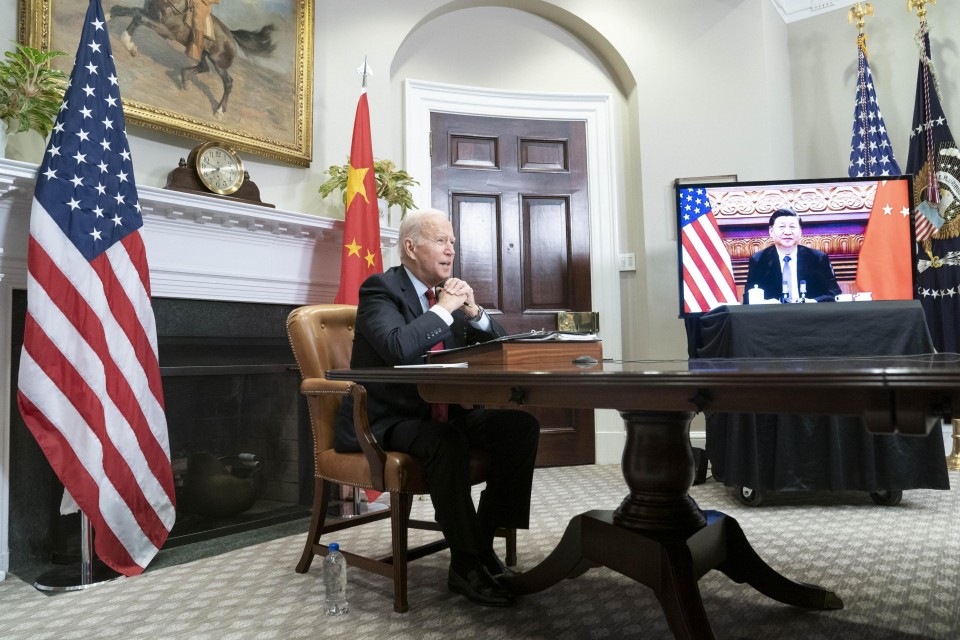 U.S. President Joe Biden speaks during a virtual summit with Chinese President Xi Jinping in the Roosevelt Room of the White House in Washington on Nov. 15, 2021. (UPI/Kyodo)

Pursuing a "stable and predictable" relationship with Russia, the traditional U.S. rival, has been important for the Biden administration as it has stepped up its efforts to counter China's growing military assertiveness and economic clout. 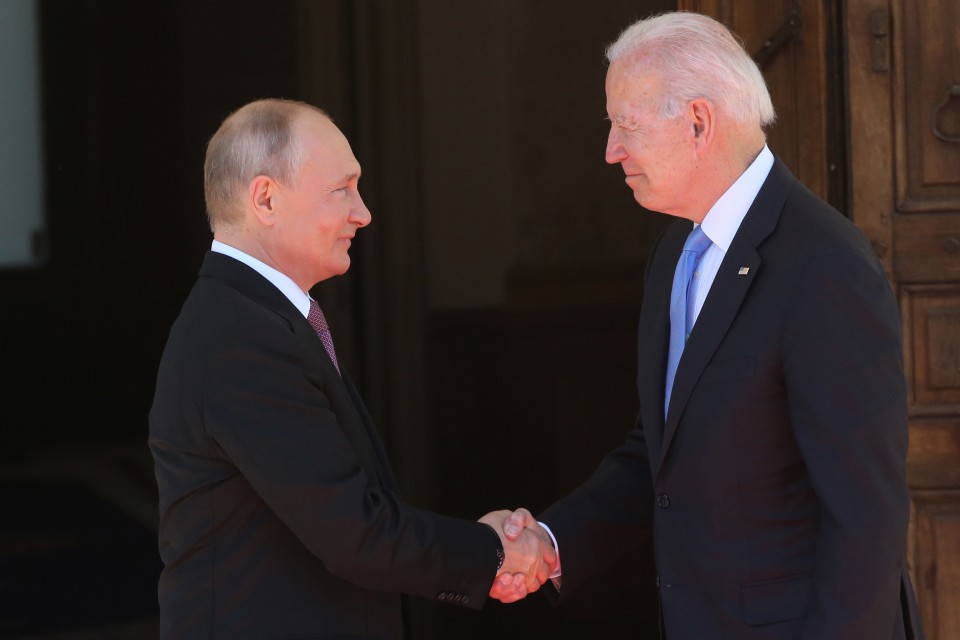 But with Russia facing increasing condemnation from the United States over an "unprovoked and unjustified" attack on its neighboring country, Biden has acknowledged "a complete rupture" in relations.

Kendall-Taylor said Washington and its allies are now dealing with "a more brazen Russia" that uses or threatens military force to pursue objectives and that Moscow will maintain "the capacity to challenge U.S. national security interests for decades to come."

"Of course, China is the most significant long-term challenge the U.S. faces, but it's not the only challenge. And so, Washington has to make strategic and budgetary decisions that reflect this reality," the expert of the Washington-based think tank added.

As tensions over the situation in Ukraine mounted in February, a senior U.S. government official indicated that the Biden administration could continue its sustained engagement in the Indo-Pacific region while handling "immense pressures" elsewhere.

In a sign that it has not taken its eyes off China, the administration announced the long-awaited Indo-Pacific strategy that pledges to strengthen U.S. security and its economic role in the region, with Secretary of State Antony Blinken making a trip to the Asia-Pacific region to hold talks with its allies in the area.

But some experts are doubtful whether Washington will be able to maintain the momentum that has been growing in Europe toward the Indo-Pacific region.

In June, leaders of the North Atlantic Treaty Organization warned that China's military ambitions pose "systemic challenges" to their alliance -- established in 1949 originally to defend against the threat posed by the Soviet Union -- and agreed to enhance ties with Japan and other Asia-Pacific nations to back the rules-based international order.

But NATO Secretary General Jens Stoltenberg said earlier this month that Russia's aggressive activities are imposing "a new normal" on Europe and that it has decided to work on a "longer-term adjustment" to beef up its defense of the eastern part of the region.

It is "unavoidable" that European countries will show renewed focus on their own defense, not just because of the Russian invasion of Ukraine, but also considering the potential that Russia's saber-rattling tactics may continue, said Yoko Iwama, an international politics professor at Japan's National Graduate Institute for Policy Studies.

Also in focus is how the Ukraine crisis will affect ties between China and Russia, which have already been drawn closer to each other amid criticism of their autocratic systems and poor human rights records.

The two countries declared their friendship has "no limits" following a meeting between Chinese President Xi Jinping and Putin on the opening day of the Beijing Winter Olympics in early February while offering support to each other's stance over Ukraine and Taiwan. 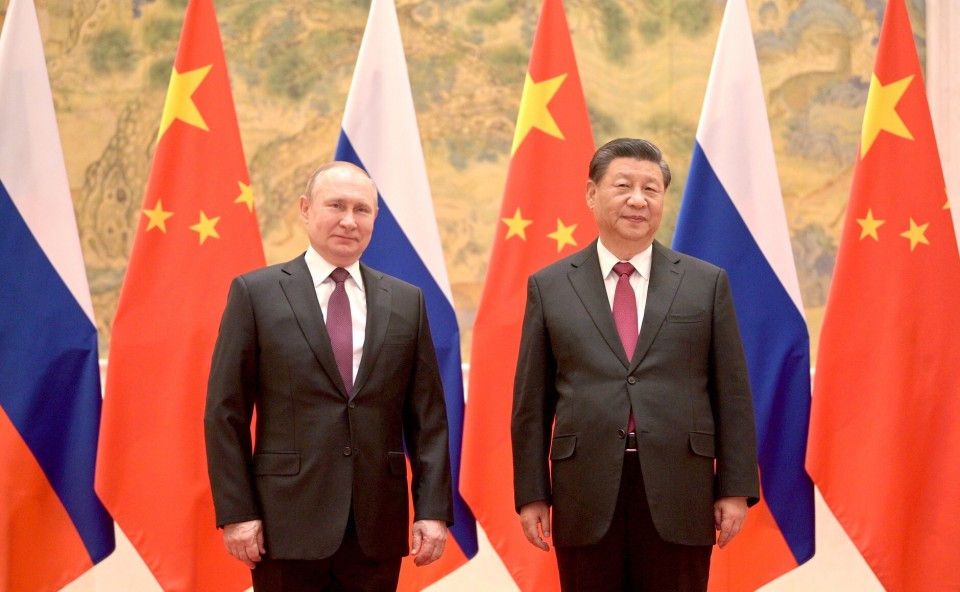 Bonny Lin, a China expert at the Center for Strategic and International Studies, said that if Russia significantly escalates the conflict in Ukraine and inflicts massive civilian casualties, China may back away from supporting Russia in Ukraine.

But if the crisis leads to the two countries continuing to strengthen ties, there may be a need to take into consideration a "long-term possibility" of coordinated Russian military activity to support China in conflicts in Taiwan and in the East and South China seas, she said.

"This does not necessarily mean Russia needs to engage in offensive operations to support the People's Republic of China," she said, adding, "Russia could do 'defense operations' close to its borders and that by itself would complicate U.S. and allies' calculations."

China views Taiwan, a self-ruled democratic island, as a renegade province awaiting reunification by force if necessary. It has also been pressing its territorial claims in its neighboring waters, such as through its repeated intrusions into Japanese waters around the Senkaku Islands in the East China Sea.

Iwama, meanwhile, said the increasingly aggressive manner in which Russia has invaded Ukraine may have created a "slight chance" for China to distance itself from Russia.

In that case, the international community should seize the moment and call on China to join moves to condemn Russia's aggression and to be less supportive in helping Russia soften the potential economic blow Moscow may suffer from the severe economic sanctions the United States and its allies are rolling out.

If those efforts fail, she said, the Biden administration would likely need a substantial strategy for how to work with U.S. allies and partners to deter or contain China and Russia by viewing them as one "hostile bloc sitting in the middle of Eurasia" instead of trying to deal with them as two separate regions.

"What is really necessary is a vision that connects all the American alliances and partners at the rim of Eurasia -- NATO, AUKUS the Quad and other partners," Iwama said, referring to a new Indo-Pacific security partnership between Australia, Britain and the United States and a group of four major Indo-Pacific democracies consisting of the United States, Japan, Australia and India.